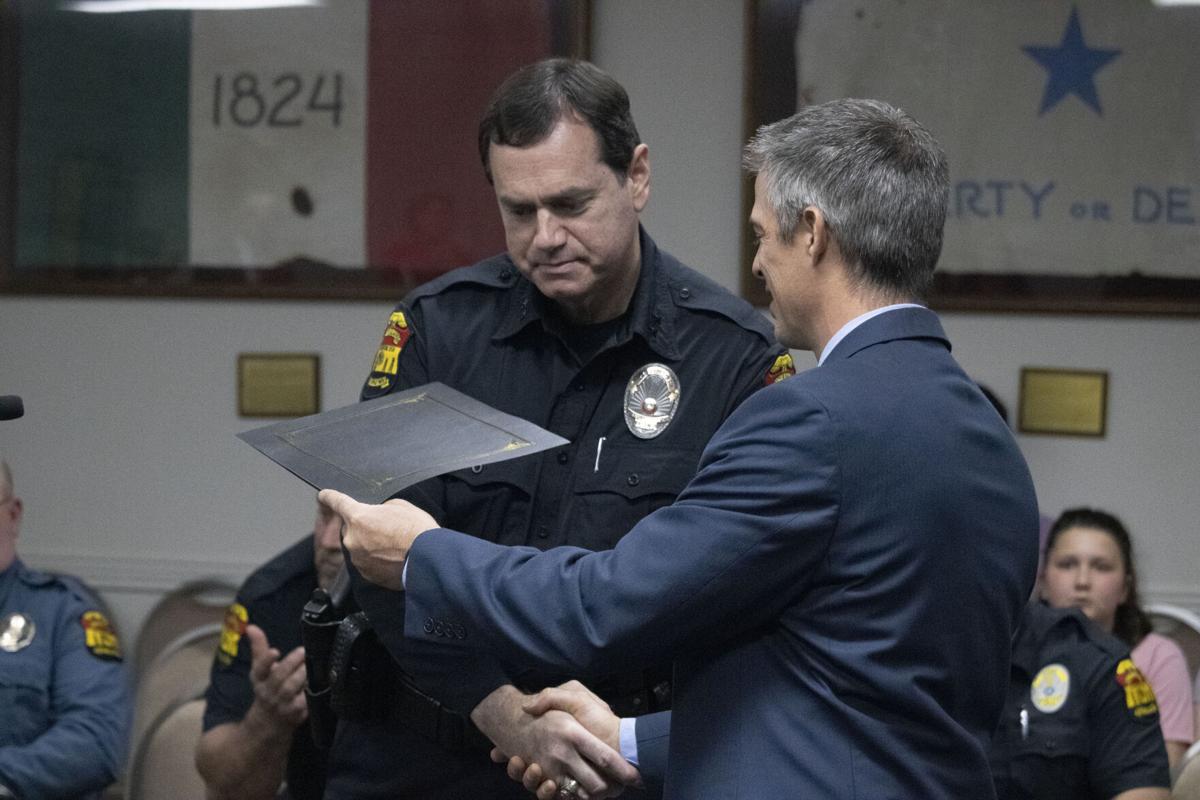 City Manager Josh Selleck presents an award to KPD Chief Todd Hunter for 10 years of service to the department. Hunter marks his 28th year in law enforcement this year. 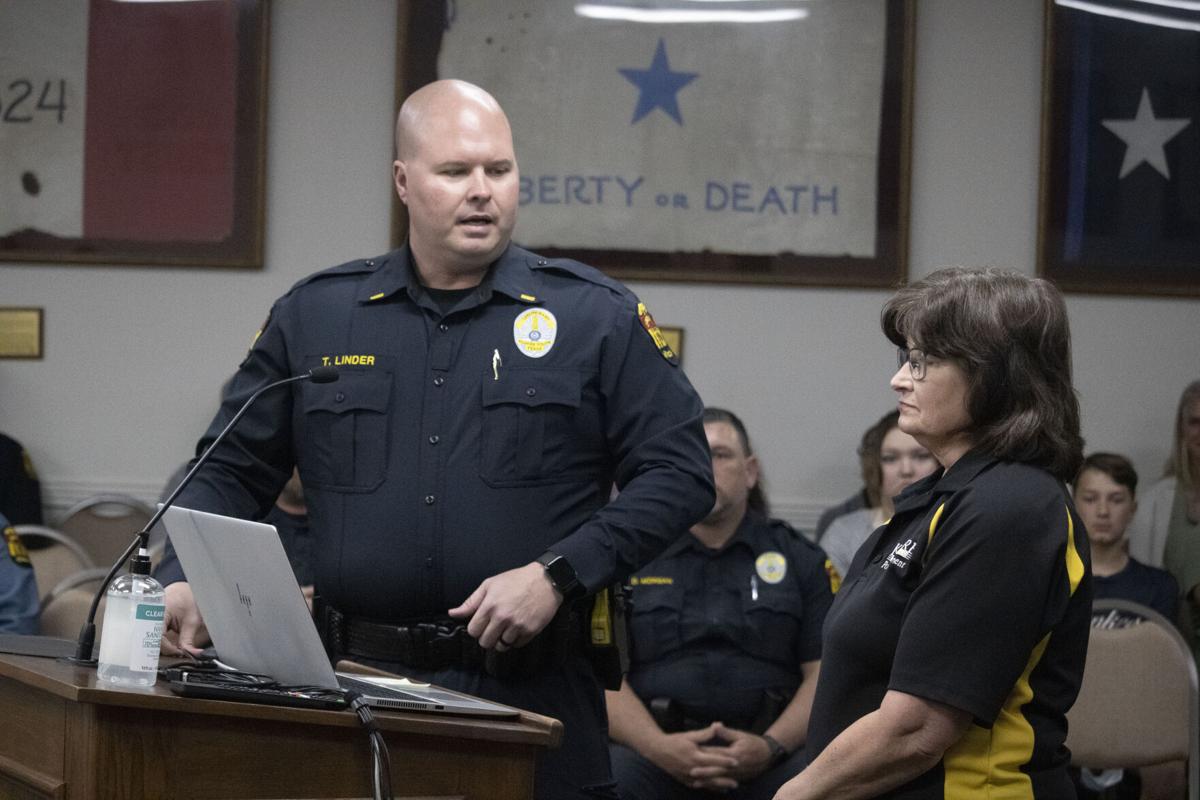 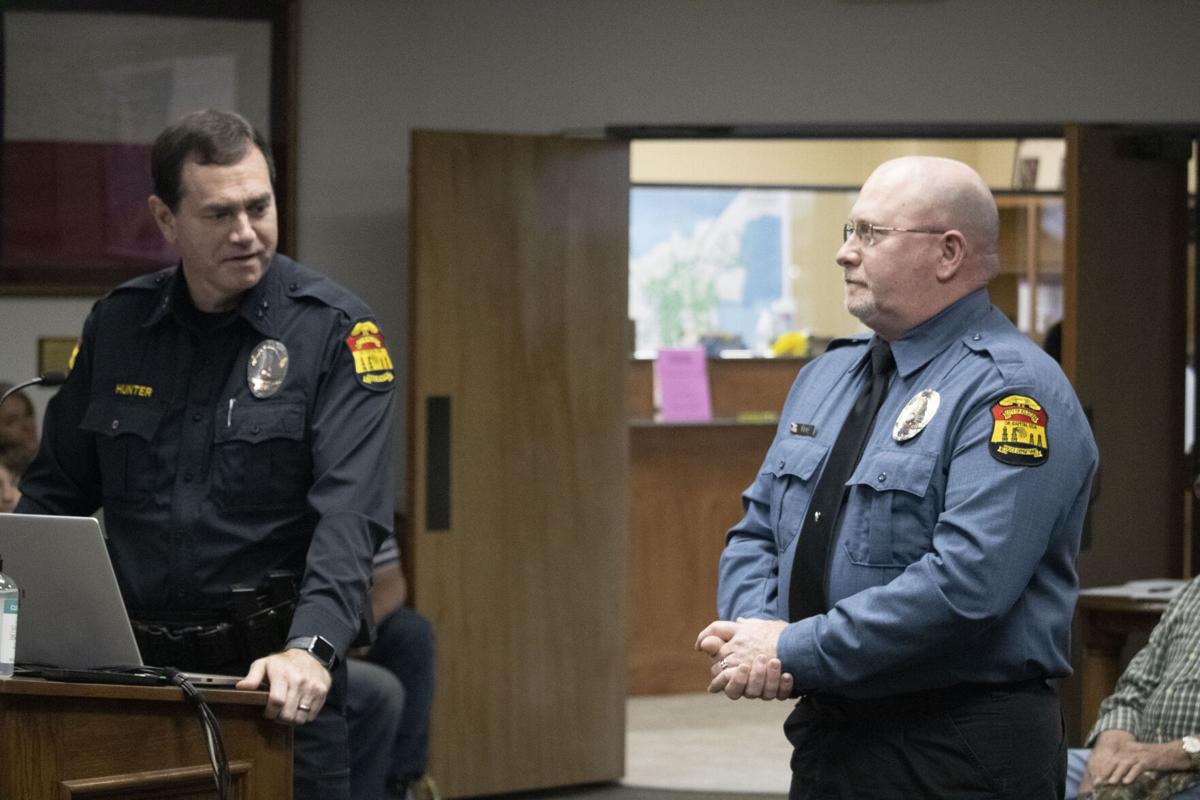 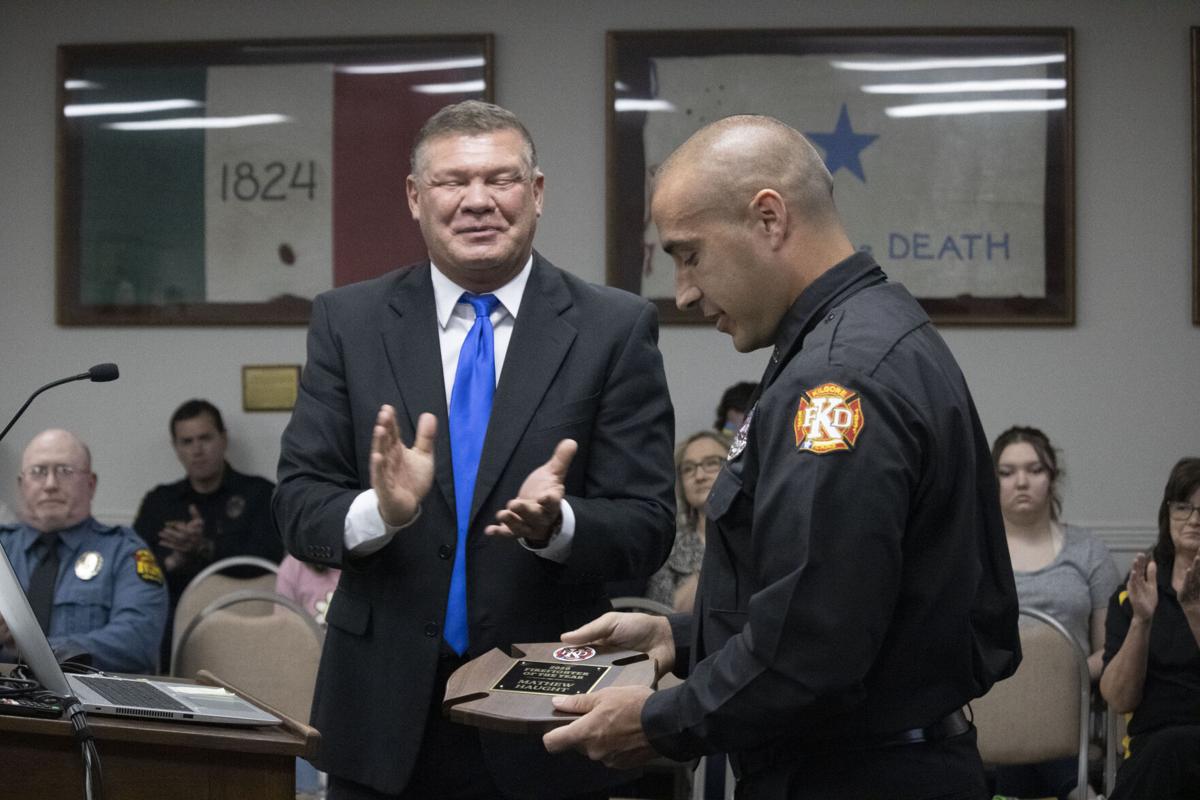 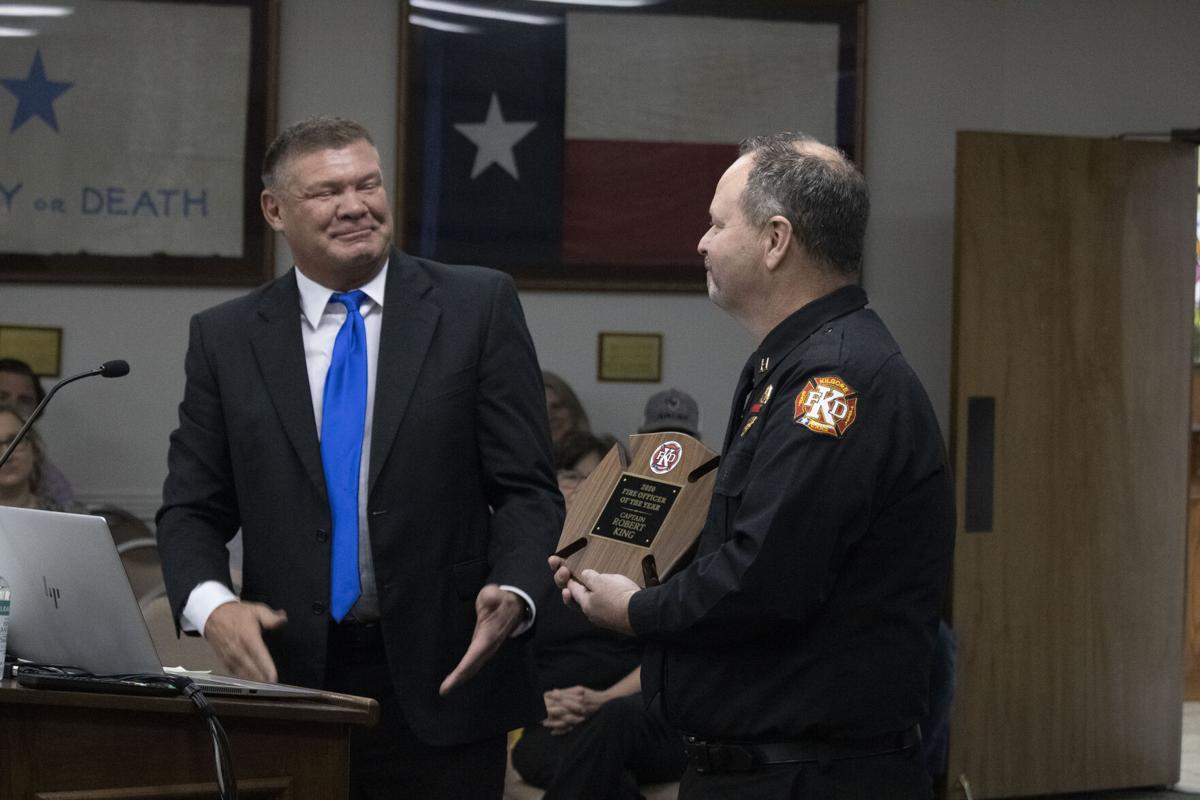 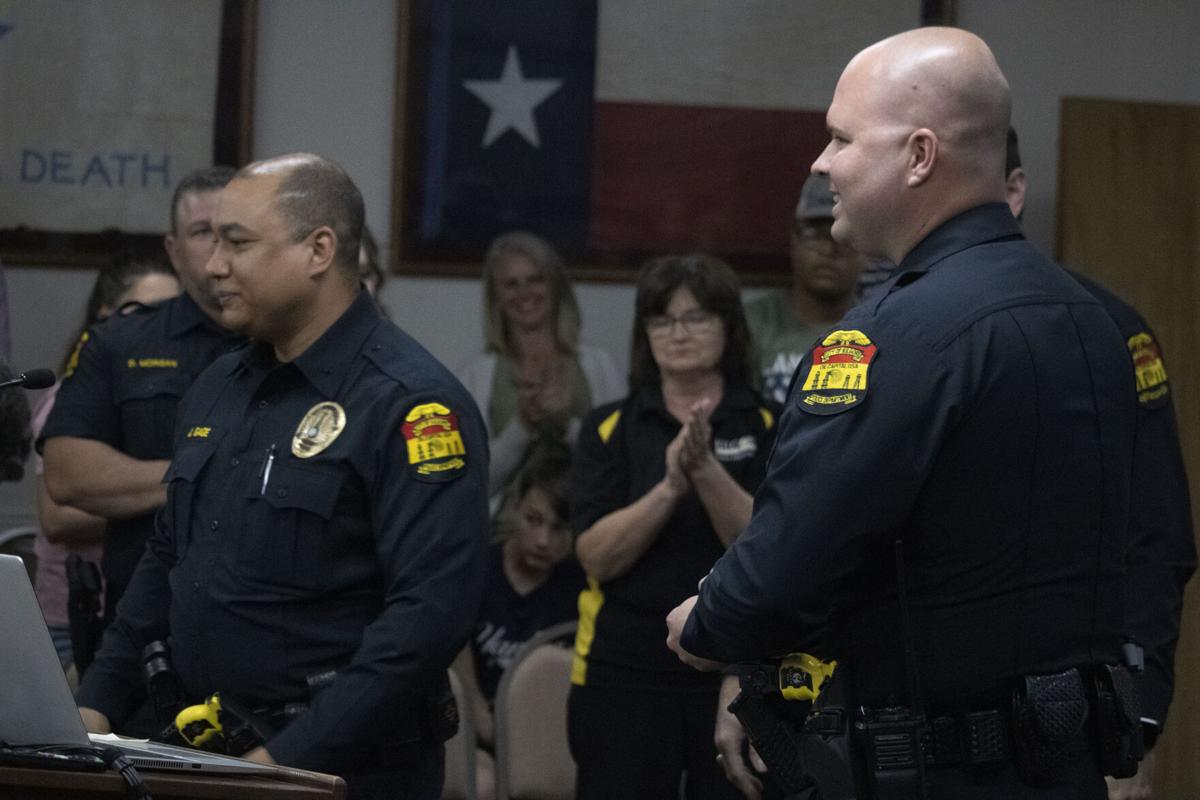 KPD Support Operations Lieutenant and Emergency Response Manager Terry Linder smiles as he receives applause after being recognized for 15 years of service to the department.

City Manager Josh Selleck presents an award to KPD Chief Todd Hunter for 10 years of service to the department. Hunter marks his 28th year in law enforcement this year.

KPD Support Operations Lieutenant and Emergency Response Manager Terry Linder smiles as he receives applause after being recognized for 15 years of service to the department.

In recognition of National Public Safety Telecommunicator’s Week, Support Operations Lt. Terry Linder congratulated all communications workers and dispatchers in Kilgore for their tireless efforts to help police and firefighters respond to local emergencies. Mayor Ronnie Spradlin read a proclamation declaring the week of recognition in Kilgore and Dispatch Supervisor Jan Vestal attended to to be recognized, as other dispatchers were on call during the meeting.

“It’s a very stressful job and we ask them to sit in a room for 12 hours. If there’s severe weather, it’s a busy 12 hours,” Linder said, noting Vestal and fellow dispatcher Amber Clifford spent the night at the dispatch center during the recent winter storm, sleeping on cots, to remain available for work during the weather emergency.

KPD Chief Todd Hunter was recognized for 10 years of service to the department.

“It’s my privilege and honor to talk about the chief this evening,” said City Manager Josh Selleck.

“He exhibits the professionalism, the compassion, the passion and a diversity of perspectives to be a great police chief. Policing is more difficult now than it ever has been before, and through his leadership and the relationships he has built within the community along with the police force, Kilgore has found itself in a much better position than so many communities.”

While Hunter is marking his 10th year with KPD, he has more than two decades of experience in law enforcement, totaling 28 years.

Lt. Linder was also recognized for 15 years of service to KPD.

Chief Hunter described Linder’s career with multiple East Texas police departments in a variety of different roles, and now he now serves as Support Operations Lieutenant and Emergency Response Manager, in addition to working as a part-time firefighter.

“He has worked in narcotics, as a patrol officer and he was assigned as a Task Force Officer to the DEA for many years,” Hunter said, adding Linder also worked in the crime scene unit.

Also honored from KPD was Kelly Reid, jail administrator, or, as Hunter describes it, “proprietor of the Bulldog B&B.”

“This is an employee who doesn’t have just a 9-to-5 job. Recently, with the pandemic, that’s thrown everybody into a loop. It’s no different with the Bulldog B&B,” Hunter said, describing how Reid was frequently tasked with inmate transport and handling all COVID-19 safety concerns at the jail throughout the pandemic.

First recognized was Jovane Rossum, who was promoted from Driver/Engineer to Captain.

“We couldn’t have done it without him. We sure thank you,” Henderson said.

Henderson said Haught had been his first fire after taking on the role of Fire Chief and noted Haught had been selected by his peers to receive the award. Henderson added the award was especially impressive because Haught has only been with the department for one year.