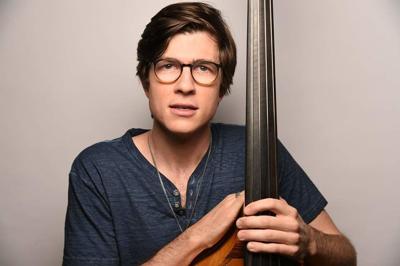 Scott Mulvahill has shared the spotlight with a number of big name artists – Alison Krauss, Brad Paisley, Peter Frampton, Steve Curtis Chapman and more – but he’ll have a Kilgore stage to himself next week as he brings his skills on the double-bass to the Texan Theater.

Hosted by Mitch Moehring Strings on South Kilgore Street, the performance is free and open to the public beginning at 7 p.m. Wednesday in the historic venue.

“We’ve had some great support from other music lovers in the area to help fund this concert,” Moehring said. “We really want to support independent musicians, so this will be the first of many concerts we’ll be hosting. In the future we’ll do some at the shop, a small ‘house concert’ setting, but we think he has a bigger pull than what the shop can handle.”

Mulvahill is a singer, songwriter and bassist based in Nashville, Tennessee, and the Kilgore stop was carefully squeezed into his ongoing tour.

“We had the idea that since we have the location now, and I get so many customers from out of state and out of town, it would be nice to showcase them at the shop,” Moehring added. “We haven’t done that yet, but I saw that he was passing through our area between shows. I reached out to him.

“He’s played with lots of people and been a bass player and guitar player for a lot of people.”

According to the organizers, Mulvahill’s music has received top honors, featured in NPR’s Tiny Desk Contest, the International Songwriting Competition, John Lennon Songwriting Contest, and American Songwriter Magazine’s 30th Anniversary Contest: “He has had numerous cuts on other artists’ albums” and is touring now for his September release, “Top of the Stairs.”

He’s a high-caliber musician, Moehring added, eager to see a packed house for the no-cost concert.

“The more and more busy the world gets, I think the harder it is to find musicians like Scott. Being able to bring someone like him who’s played all over the world to our adorable town, I think, is super-important,” Moehring said, adding to a big pool of talent that’s already here. “Being able to share the outside world with East Texas is a great thing.”