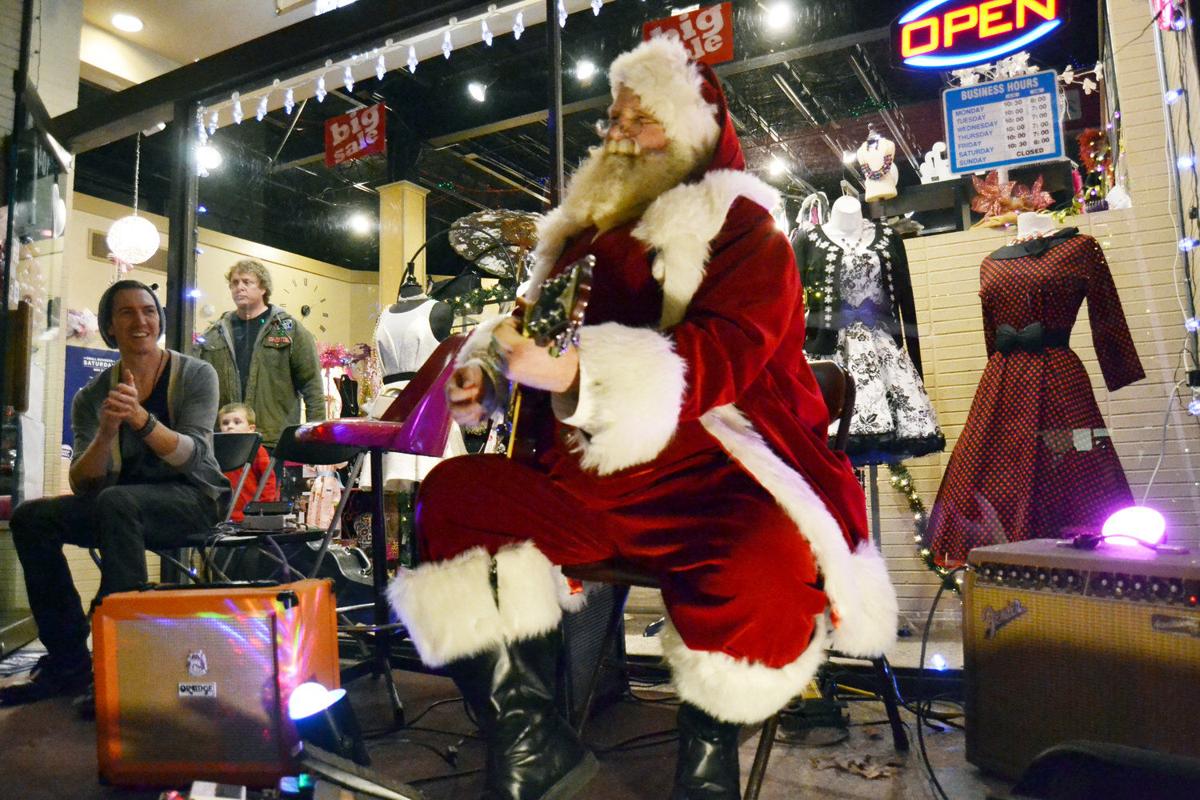 SANTA’S BACK IN TOWN – Santa Flavious shows off the Jolly Old Elf’s many talents the 2018 Mingle & Jingle in downtown Kilgore. He and Joshua the Elf, a.k.a. Josh Mandreger, will be back in the Small Business Saturday spotlight Nov. 30. 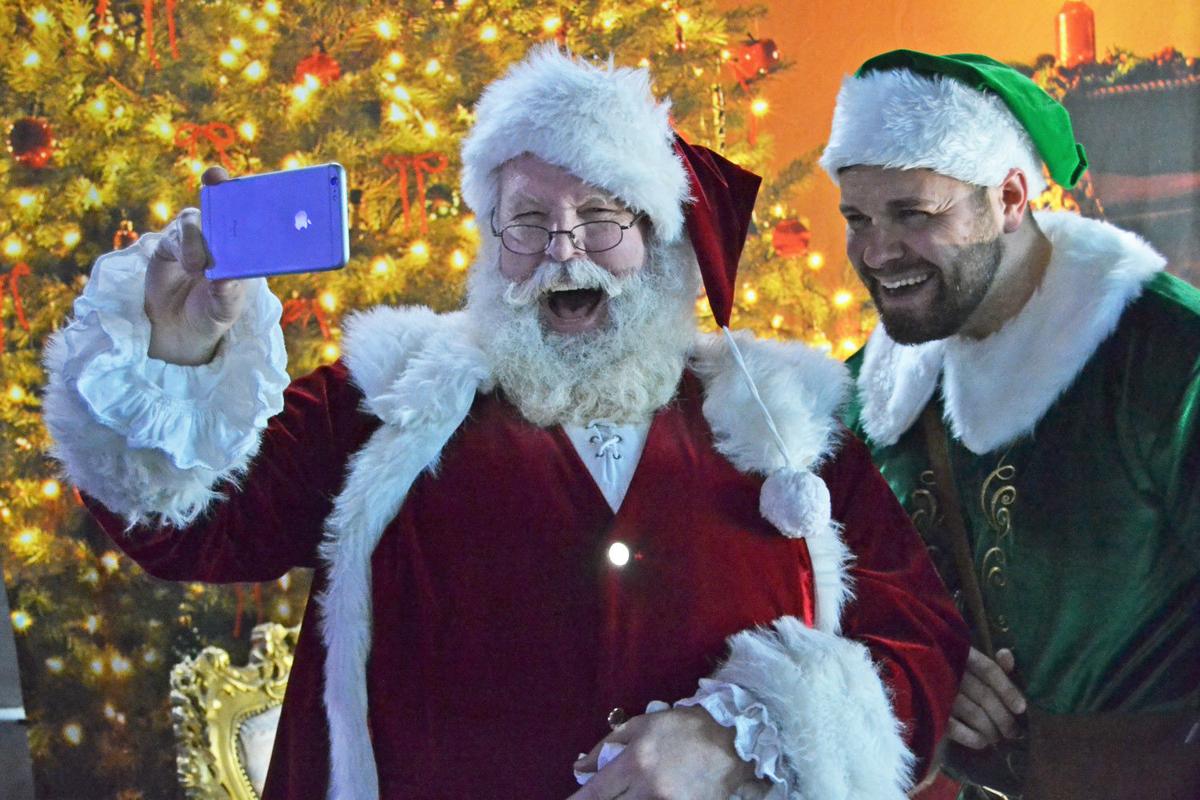 Santa Flavious and Joshua the Elf pose for an ‘Elfie’ Friday night in 2018. 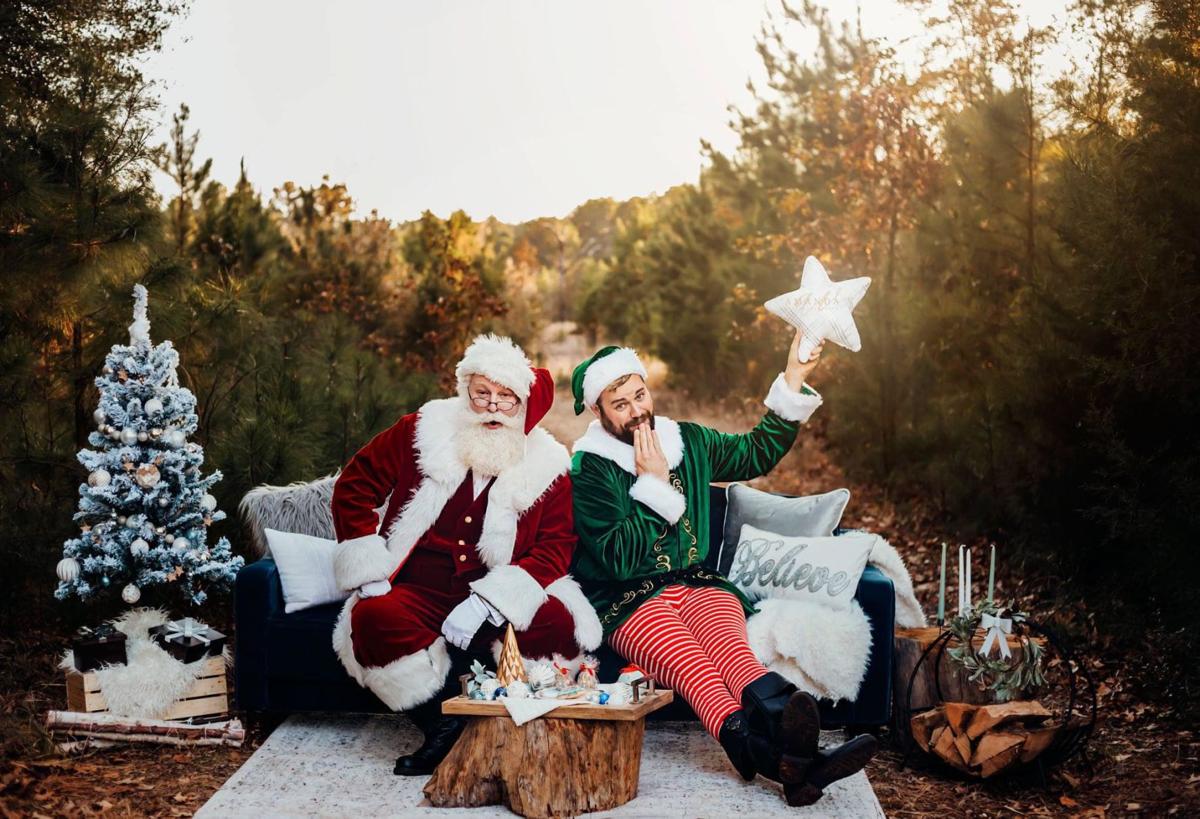 Santa Flavious and Joshua the Elf sit for a photo shoot with Amanda V Photography. The pair will return to downtown Kilgore on Saturday for the annual Mingle & Jingle soiree. 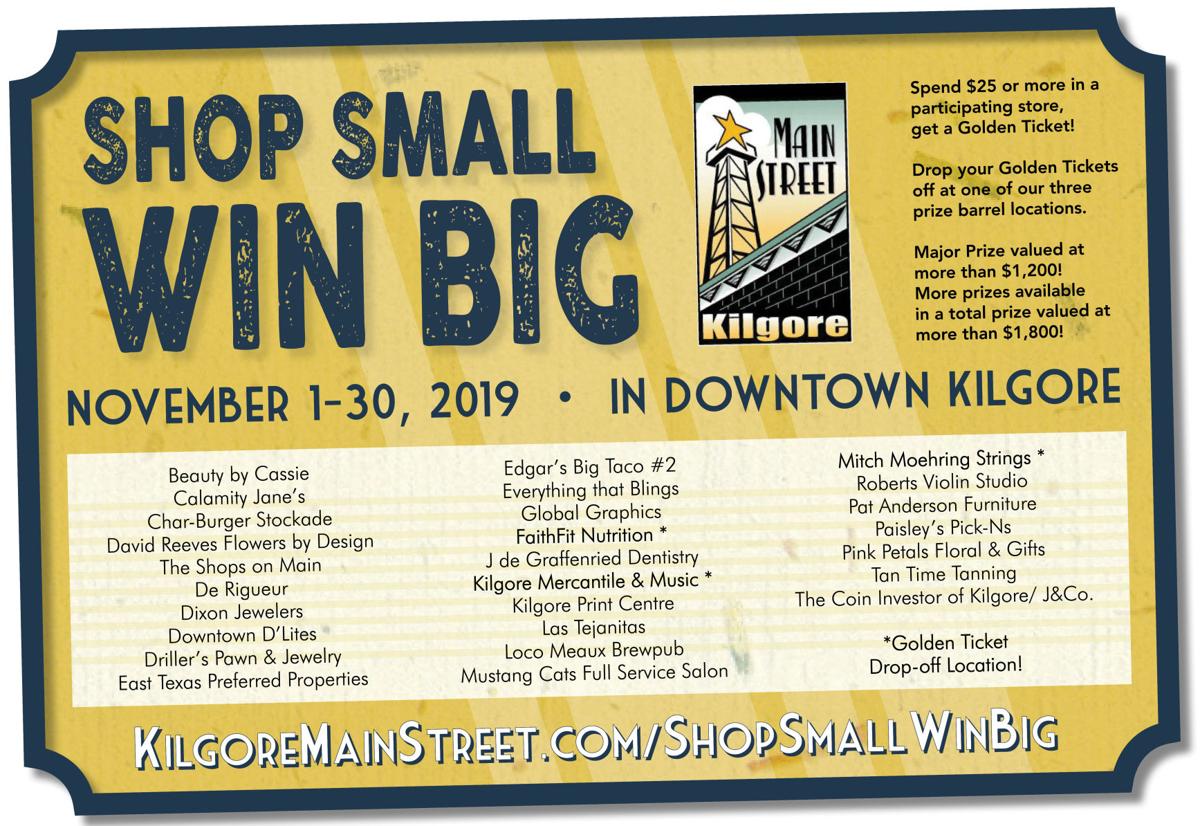 SANTA’S BACK IN TOWN – Santa Flavious shows off the Jolly Old Elf’s many talents the 2018 Mingle & Jingle in downtown Kilgore. He and Joshua the Elf, a.k.a. Josh Mandreger, will be back in the Small Business Saturday spotlight Nov. 30.

Santa Flavious and Joshua the Elf pose for an ‘Elfie’ Friday night in 2018.

Santa Flavious and Joshua the Elf sit for a photo shoot with Amanda V Photography. The pair will return to downtown Kilgore on Saturday for the annual Mingle & Jingle soiree.

Santa Claus was born in the North, Santa Flavious at a photo shoot.

It was 2015. The photographer’s original Santa Claus stand-in had backed out last-minute. Costume rented, camera in-hand, the stressed shutterbug wracked her brain – who could fill out that Yuletide duds?

She had a friend. He was jolly. He was whiskery. He was… fluffy.

He’d do the trick.

Four years later, that one-off Santa is looking at about 70 hours in the red threads at a variety of holiday events, 30-plus, in East Texas and as far as Dallas, including an encore gig with the Dallas Stars. He’s also the face of Christmas in Kilgore 2019, featured in ads in statewide publications through local tourism efforts.

Alongside his Christmas cohort Joshua the Elf, a.k.a Josh Mandreger, Santa Flavious is set to ring the holidays Saturday during downtown’s annual Mingle & Jingle soiree.

Clark Kent, Bruce Wayne, Peter Parker – Santa Flavious is keen to keep his identity a trade secret, too, vigilant not to distract from the Christmas spirit.

“I certainly don’t want to spoil it for people, the magic and so forth,” he says. “My objective, it sounds cliché and it sounds like I’m picking notes from a Hallmark card or a movie, is just in its simplest form to bring joy to people.

“Christmas has always been my favorite time of year. And this affirmation that comes with it? What?!”

Santa Flavious sees all sides of life, and there’s a lot of misery in the world, a lot of challenges and struggle.

“Somewhere in the middle of all of that, if Joshua and I can just light that little spark that sends people away with an extra spring in their step and a little bit of selflessness, making it about someone other than themselves and about reaching out to someone else at the table… mission accomplished.”

Mingle & Jingle runs 6 p.m. to 9 p.m. in the Main Street District, a festive mix of shopping, food, music and more, including the culmination of this year’s ‘Shop Small, Win Big’ campaign. Shoppers have until the end of the event to collect a Golden Ticket for every transaction of $25 or more at a participating business.

For more information about Mingle & Jingle and other upcoming activities, log on to KilgoreMainStreet.com.

Santa Flavious and Joshua the Elf will be diving into the revels with gusto, and they might even pick up a guitar in the midst of the celebration – the rockin’ Santa impersonator achieved early viral fame when his impromptu, Christmas-themed Led Zeppelin cover at the photo shoot eventually accrued more than 1 million views through Instagram.

“I showed up and I absolutely had a blast, connecting with the kids, turned a couple of cranky kids into smiling kids, just enjoyed the heck out of it.”

With a variety of other holiday parodies under their belts (ready-to-watch at Facebook.com/SantaFlavious), Santa Flavious and Joshua the Elf will drop their latest video on Thanksgiving – backed by a pint-sized band of child-elves.

“We cut up together. We love kids, we love Christmas – admittedly both our favorite time of year,” Santa Flavious says. “We are like the Christmas version of ‘Flight of the Conchords.’

“It’s been a blast, it’s just picking up more momentum every year, and we just enjoy the heck out of it.”

Where’s the name come from? Well, by the time he donned Kris Kringle’s duds, the generic titles – Santa Bob, Santa Tom, Santa John – were in use everywhere in service of St. Nick.

“When I decided I needed a moniker, I knew I needed something that people would remember,” the Longview-based entertainer said. “Flavious is the embodiment of Christmas: it’s the season of perpetual hope all wrapped up into a goofy name.”

Santa Flavious has been in Holly Jolly mode for weeks. He takes the jibes about Christmas coming too soon in stride.

“The great debate of celebrating Christmas when the turkey hasn’t had it’s day yet. I’m a bit biased,” he quips. Santa Flavious will definitely be ‘suffering for his art’ Thursday, feasting merrily to add a bit more “fluff” to his signature red duds.

“There’s room for all at the table. There’s room for turkey lovers, the cornucopia lovers and the mistletoe lovers alike. Pull up a chair; we’ll sing a Christmas song together, we’ll put the Yule log on the fireplace and give thanks.”