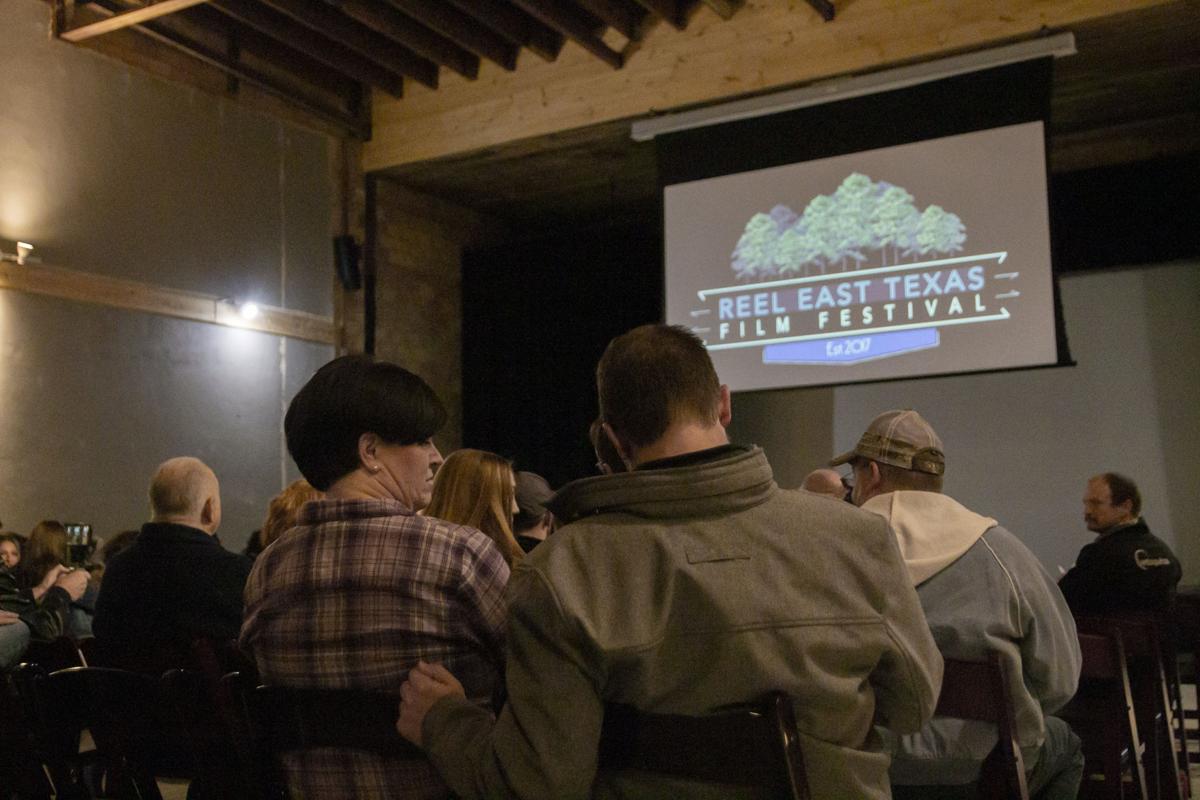 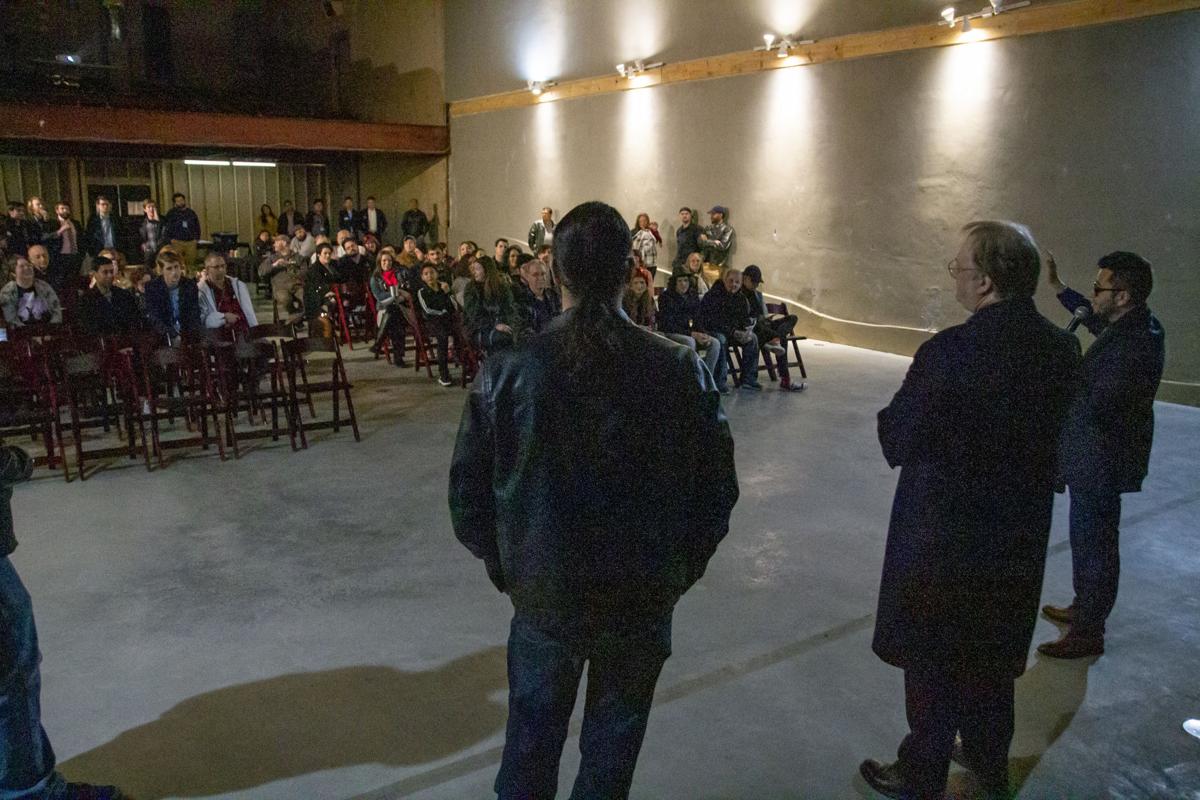 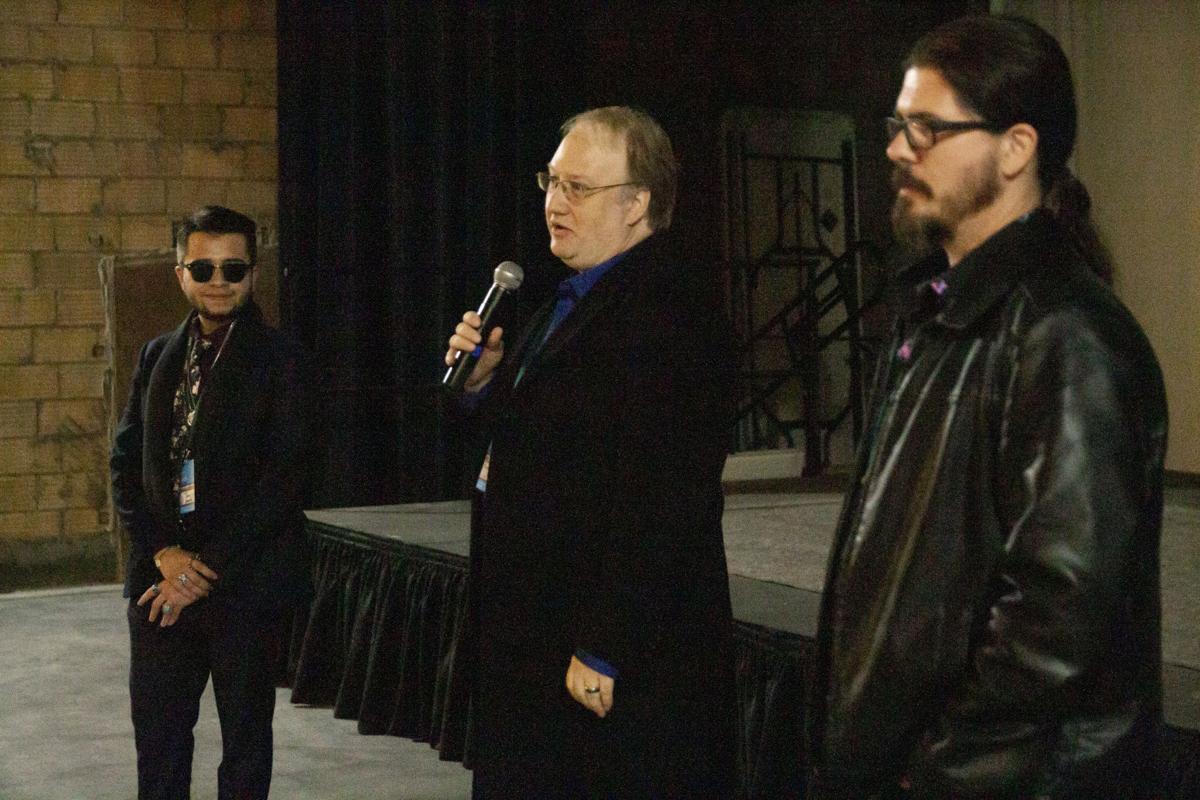 Scott Jones, president of Longview Film Club and director of horror short “Werebeast” answers questions for the audience in the Texan Theater Friday, Nov. 15, following the screening of his film.

Scott Jones, president of Longview Film Club and director of horror short “Werebeast” answers questions for the audience in the Texan Theater Friday, Nov. 15, following the screening of his film.

The event included new venues this year, with more than 80 film screenings in the Texan Theater and Texas Broadcast Museum, as well as live screenplay readings performed by actors in Kilgore College’s Van Cliburn Auditorium.

On Friday, filmmakers, writers and actors packed the Texan Theater and the Reel Lounge at the Old Post Office on Kilgore Street to mingle, swap filmmaking stories and movie trivia while also queuing up to catch some film screenings.

In the Reel Lounge, screenwriter Shaun Ireland, from Nacogdoches, and Cameron McCasland, originally from Edgewood but now residing in Nashville, were engaged in a spirited conversation about film when they stopped to discuss the projects they had entered in RETFF.

“My screenplay is based on actual events,” Ireland said.

“It’s about two estranged brothers who are brought together during a family crisis to save the family farm and also this happened during the weekend of the space shuttle Columbia disaster. So they’ve got to save their family farm. These two estranged adult brothers discover that their stepfather has built a crystal methamphetamine shed in this timber track and the foresters are going to come out there the next week and they’re going to get rid of it. Then the space shuttle Columbia explodes directly over their property so now they’ve still got to get rid of this shed while finding out that every federal, state and local law enforcement agency in the country is descending on their rural community.”

Ireland had just arrived from Nacogdoches Friday evening for his first-ever visit to RETFF. He said he was looking forward to the live reading of his screenplay the following day.

“I’m going to do that and watch some other local short films.”

“My movie is a documentary about Dr. John Kline, who was a member of the Harlem Globetrotters. He played from 1953 to 1959. After his basketball career was over, he kind of got lost in the ‘60s drug addiction,” McCasland said.

“In the 1970s, he came back clean and sober, went back to school and got a doctorate and started saving people from drug and alcohol addiction. From there, he started a foundation called the Black Legends of Basketball and was instrumental in getting the first Harlem Globetrotters in the Basketball Hall of Fame.”

McCasland, who also participated in RETFF’s first year in 2017, was particularly proud of the fact part of his documentary was filmed in Kilgore.

“We shot part of it in Kilgore at the Texas Broadcast Museum,” he said.

“One of the things that I think is special for me this time around is, when I was here two years ago, Chip had talked to me about trying to get movies to come to Kilgore. I grew up in East Texas and I wanted to help do that so one of the things I did was I went to him and said ‘Hey, I’ve got this footage of the Harlem Globetrotters. Can we run it at the Texas Broadcast Museum, film it and run it new?’ We were able to do that. I don’t know if anyone has made a movie here from the first year. It was only a small part but it was cool to be in the room where they had done part of that. We’re on year three now and the thing he set out to do in year one, one way or another got accomplished.”

The club has made one previous movie but this marks their first entry into the festival scene.

“It was really a great chance to get to see other films, get to see other projects at different levels as our own. That was very educational for us. It infused a lot of excitement into the group, getting to interact. The most interesting part to us was really getting to talk afterwards to people that have been involved. We really liked the summations at the end, the question and answer, and hanging out at the lounge.”

Jones’s strategy was to use his time at the festival to learn as much as he could from other filmmakers and directors to help his own club, which was founded in 2017.

“We tried to focus more on seeing as many films as we could, getting a lay of the land. Here we are, a new club,and we’re stepping through our levels of quality as we go up. We were really interested in that. The question and answer period lets you get a little bit of discussion right there. There was time afterwards when you could talk privately with (other filmmakers).”

He added his favorite part of the festival was its flexible schedule.

“There was enough flexibility between the question and answer sessions and the gap right after and then the lounge. You really got a chance to talk with folks and get their experience.”

His favorite film at this year’s RETFF was “Flow”, a story about a young runner and his brother helping him train following the death of their father.

“It brought a tear to my eye, it was that good.”

For the future, Longview Film Club has already set a new film project in motion for 2020 and are holding auditions in December and January. RETFF helped the club set a target to aim for in terms of production quality, Jones said.

“Every time we do a film we target a quality level and we’re shooting to double our quality once more from ‘Werebeast.’ A lot of what we learned from the film festival was, where are the films with the best cinematography, with the best acting? It really helped us set our levels for next year. We love the festival.”

Jones added the club is casting locally and hiring local film crew members. He encouraged anyone interested in becoming part of the club to visit the group’s website, www.LongviewFilm.club.

For a full list of winners from the festival, see online.