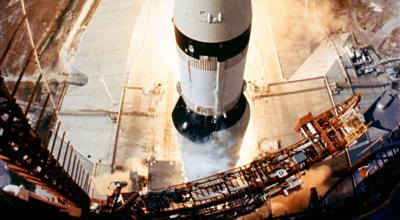 Alan Wylie grew up in Kilgore but had his sights set far beyond East Texas.

Growing up at the dawn of the Space Race, Wylie dreamed of working on the technologies that would propel men to the stars.

Now, 50 years after the Apollo 11 moon landing, Wylie shares the story of his role in America’s ascent into space with a hometown crowd. In April, he gave a presentation to Kilgore Lions Club and his fellow Rotarians at Kilgore Rotary Club.

“I just loved growing up here in Kilgore. It’s such a fantastic place to grow up in, to get educated in. We have such great teachers in our school,” Wylie said, joking that the Kilgore High School speech teacher who instructed him in 1961 was in the audience listening to him recount his years with National Aeronautics and Space Administration.

In those formative years, Wylie, like millions of Americans, turned his eyes upward to watch in fascination as the first men began to travel past Earth’s atmosphere.

“The space program started back in 1957 with the Sputnik satellite. I remember my neighbor, Mr. Dial, his son Hal Dial is a good friend of mine. Mr. Dial would get his telescope out and he and I would look at the Sputnik aircraft flying over.”

Russia, then the Soviet Union, made the first foray into space with the launch of Sputnik 1, Earth’s first artificial satellite, in Oct. 1957.

They also put the first human into space, cosmonaut Yuri Gagarin, who piloted Vostok 1 into Earth orbit in April 1961.

The Americans weren’t far behind, however, and Wylie soon had American astronaut heroes to look up to.

In May 1961, astronaut Alan Shepard flew a suborbital mission.

“It was quite an achievement. When he got back down, New York City gave him a ticker-tape parade,” Wylie said.

“A few years later, John Glenn completed three orbits around the Earth. John, after he flew, he was an icon and they did not want to put him back into space because they were scared of losing an icon, an American hero.”

An interest in science and a fascination with space travel propelled Wylie to a college education and a job at NASA’s Houston center.

The Space Race continued, culminating with the 1969 moon landing. Wylie told Rotarians and Lions of the role he played in its progress.

“I was in what was called the Mission Planning and Analysis Division: Math/Physics Branch. Our role was navigation and navigation is basically knowing where you are because, if you want to get to some place in particular, first you have to know where you are and then you compute the maneuvers to get where you want to be.”

Wylie explained his group used the most advanced computers of the time, some of which could fill an entire room, to compute positioning and maneuvers from the ground station in Houston and also from the onboard computers of space vehicles. Using broadcasting stations, spaced across the globe to stay in constant communication with orbiting vehicles, Wylie and his team precisely calculated the position of space vehicles to keep them on course.

Throughout the Apollo program, he worked on the navigation for the ground computer. The computer he and his team used was an IBM 360 Model 75, which held less memory than some modern cell phones.

Despite the limits of their technology and the difficulty of the task at hand, they got the job done.

And, he says with a hint of pride, they were the best at what they did.

“In the organization I was, we were the navigation experts. We did all the analysis. So, anytime anyone had a question about navigation, they came to us.”

He and his co-workers became flight controllers, analyzing data with such precision they could detect the waving motions of antennas outside space vehicles as the crafts rotated through the void of space.

Their navigation data and analysis was vital throughout every flight phase, from takeoff to lunar orbit and the descent to the lunar surface.

Wylie’s job was not all technicalities and data-crunching. He knew that the missions he worked on represented the highest aspirations of humanity.

He told a story about Frank Borman, a NASA astronaut who orbited the moon on the Apollo 8 mission in Dec. 1968. This was the mission which captured the now-legendary photograph “Earthrise.”

Wylie said Borman had been told he should find something poignant to say as the craft orbited the moon and re-emerged to see the Earth. Someone suggested he read a Bible passage and Borman’s wife recommended the Old Testament.

“So, he read ‘In the beginning, God created the heavens and the earth,” Wylie said, his voice becoming choked with emotion.

“They said that had a profound effect on everybody across the world.”

Wylie also recounted the tragedies of the American space program, from the Apollo 1 capsule fire to the Challenger and Columbia explosions.

“When you meet people like these astronauts at the store, they don’t talk to you like they’re superior to you. They have conversations with you. And so, these are all, again, American heroes.”