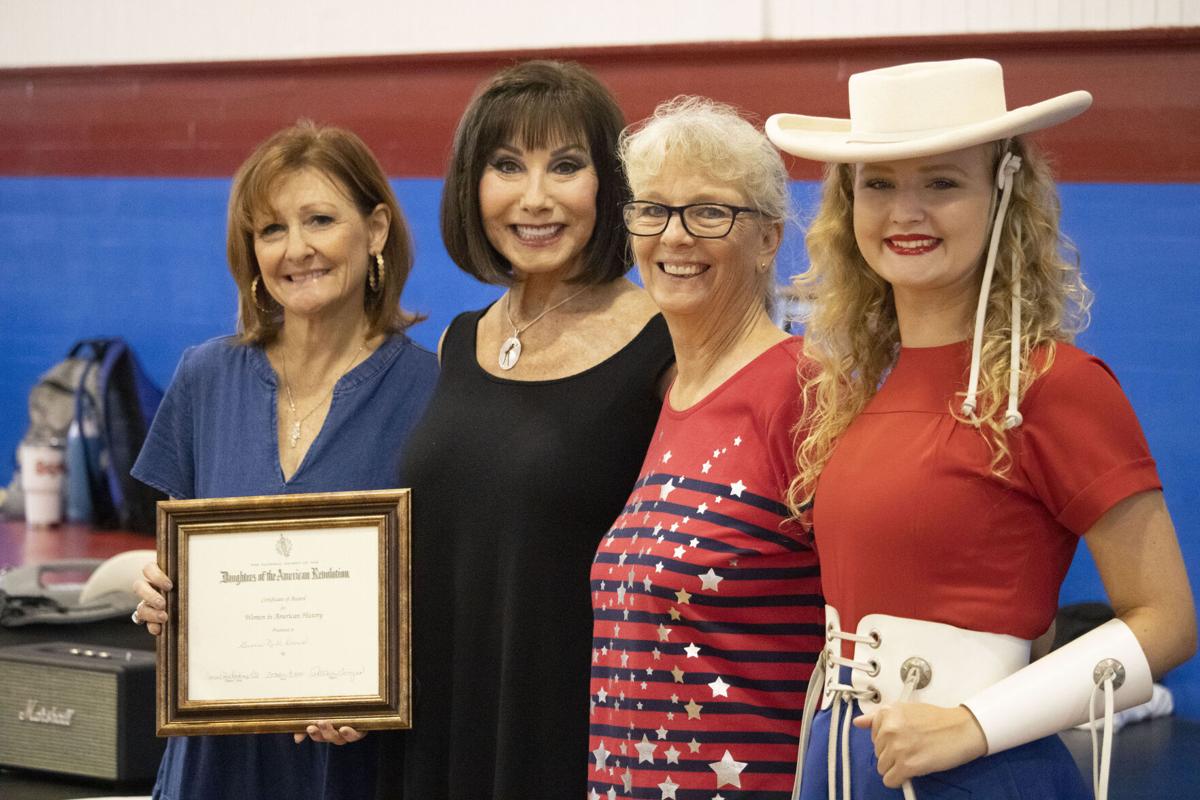 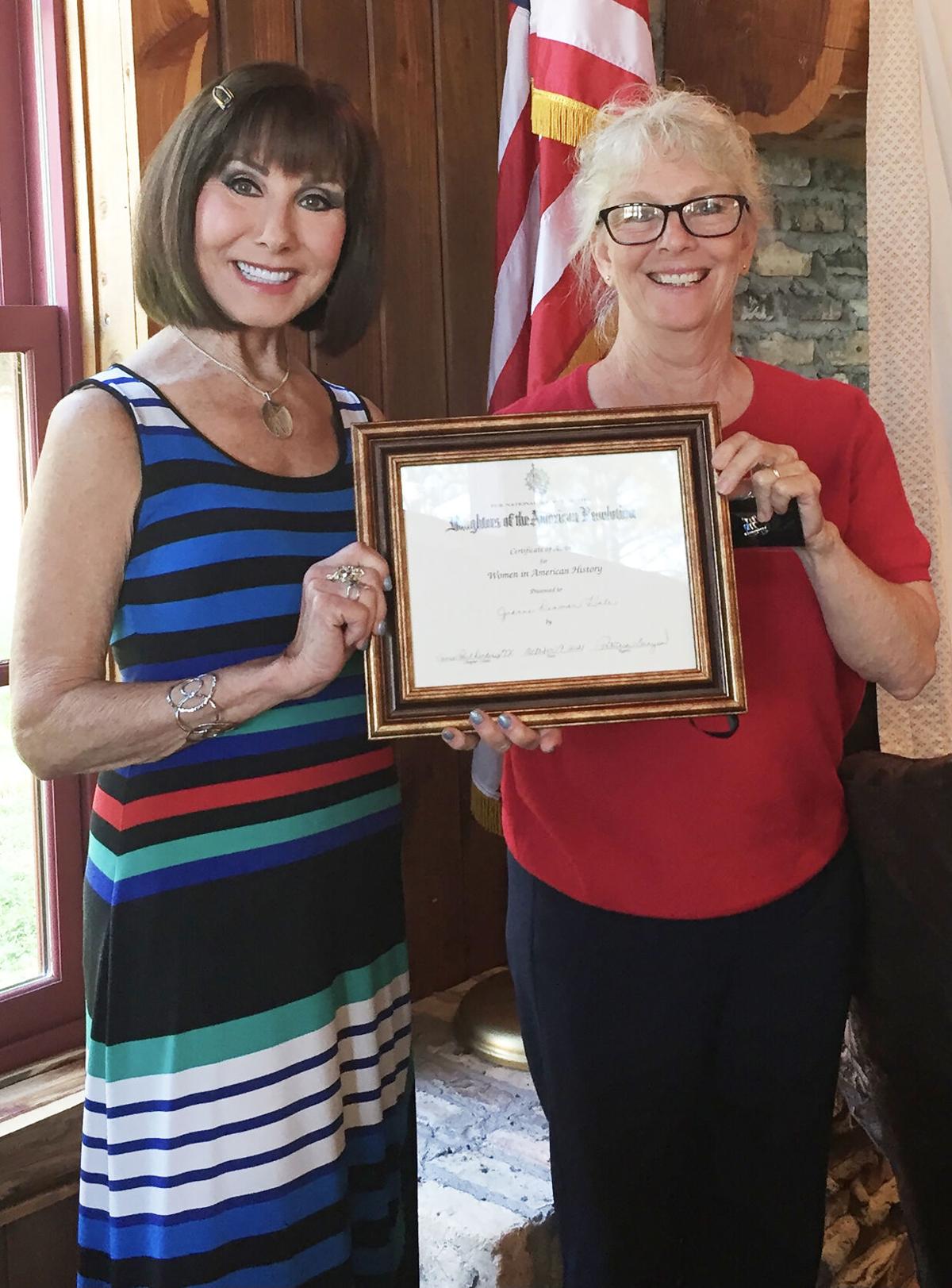 Martha Deen accepts a posthumous Women in American History award, given to her mother Jeanne Denman Hale, from Patti Cunyus. 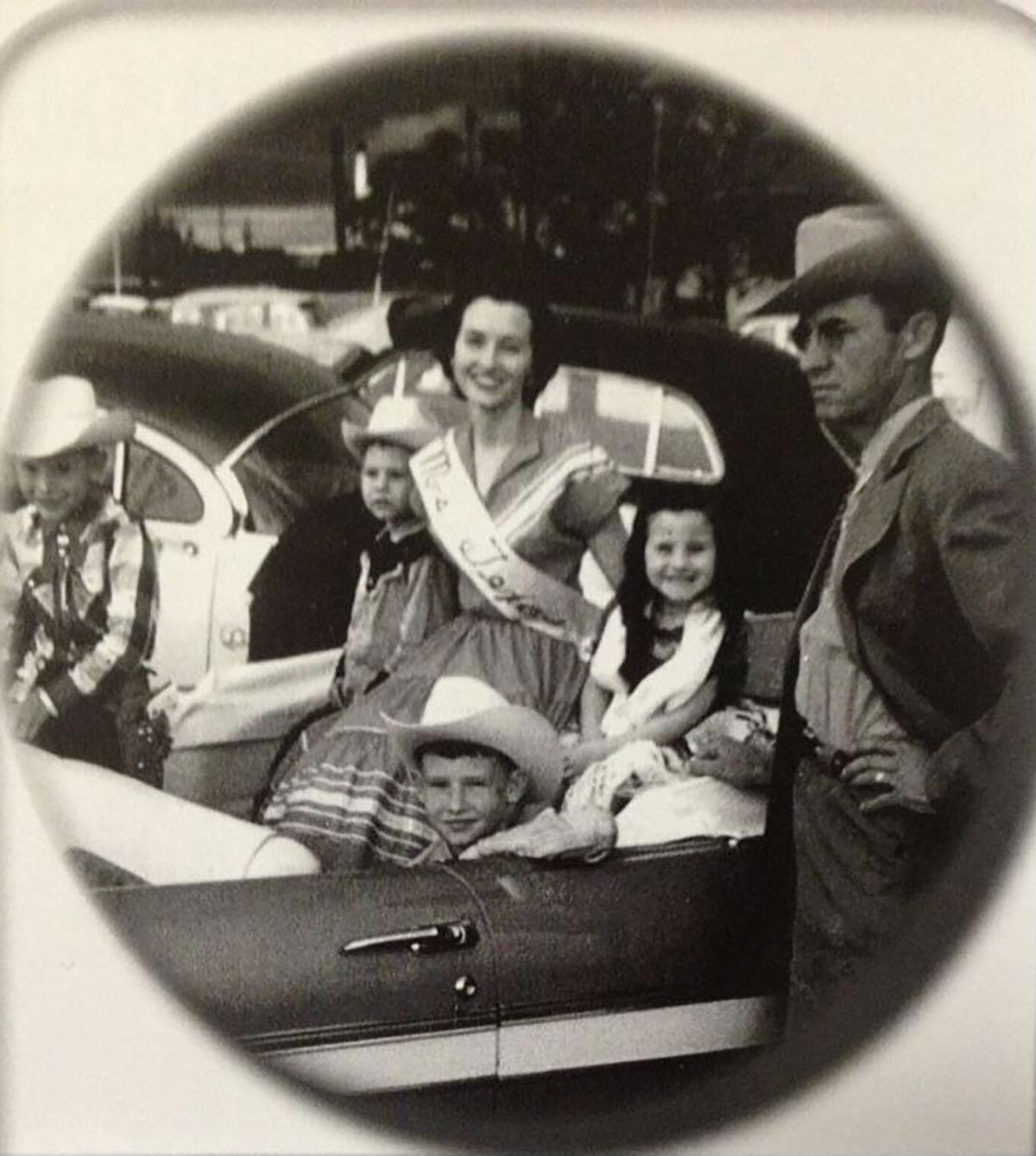 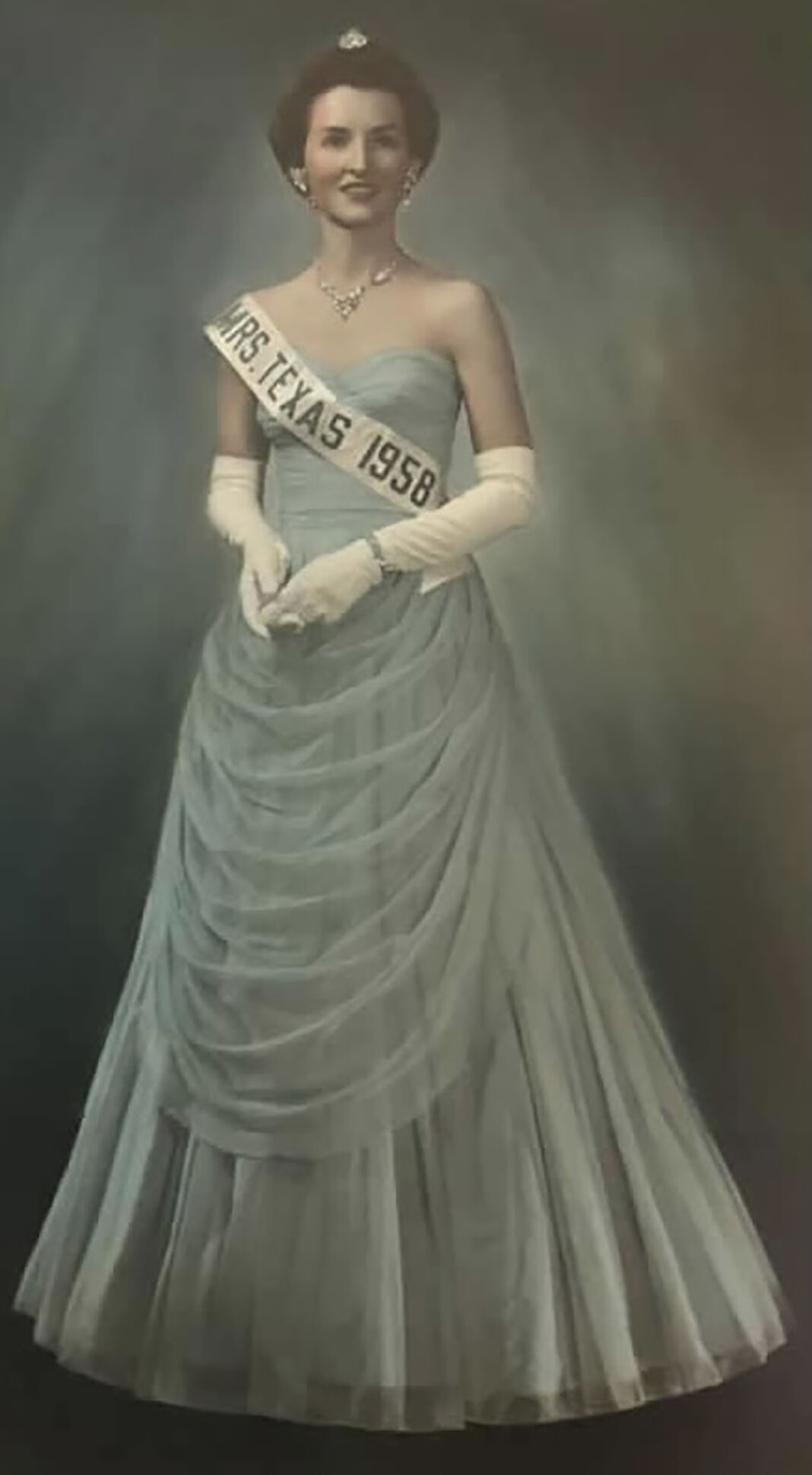 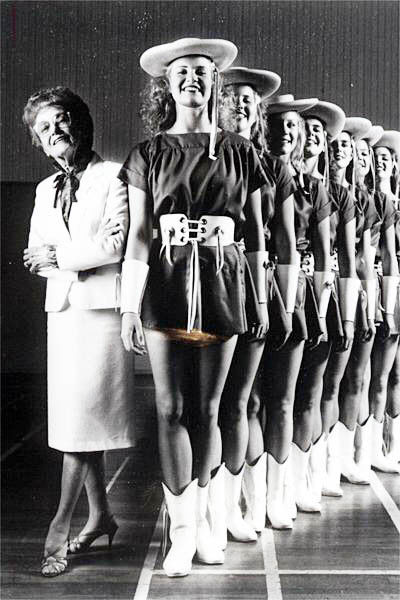 Martha Deen accepts a posthumous Women in American History award, given to her mother Jeanne Denman Hale, from Patti Cunyus.

KILGORE — Two women instrumental in the Rangerettes program were honored by the Samuel Paul Dinkins chapter of the Daughters of the American Revolution this past weekend.

The Kilgore DAR chapter presented posthumous Women in American History awards to Gussie Nell Davis, founder and first director of the Rangerettes, and Jeanne Denman Hale, who, in addition to many other accomplishments, founded Rangerettes Forever, the first alumni group of its kind.

The National Society of the Daughters of the American Revolution is a service organization that is passionate about serving our community, preserving history, educating our children, and honoring and supporting those who serve our nation.

The Paul Dinkins Chapter says Gussie Nell Davis was honored for “her exciting innovation that has covered the globe.”

“On November 4, 1906, in Farmersville, a star was born — a star whose brilliant beam would skyrocket across Texas, the United States, and across the globe. Throughout her life, Gussie Nell Davis was often compared to a “ball of fire” and she would indeed blaze a shining new art-form, the dance-drill phenomenon.

Dr. B.E. Masters, dean of Kilgore Junior College, was known for his expectation of excellence. He had heard from a friend about a dynamic young woman who directed Greenville High School’s pep squad, which under her direction, performed drills and a few dance steps on the football field, and she had named them the Flaming Flashes. Dr. Masters asked Gussie Nell Davis to come to Kilgore, and he told her that he wanted her to form a group of girls that would fulfill three goals:

1. Equalize the boy/girl ratio at the college, which was then 6-1

3. Provide a half-time show at football games which would entertain the fans enough to keep them in the stands instead of slipping out to have a “nip” of whiskey.

When Miss Davis asked him if he wanted a drum and bugle corps, he laughed and said “No! I wouldn’t have one!!” When she asked what he had in mind, he said, “Well, that’s up to you — that’s why I’m hiring you!”

So, she combined her knowledge of military drill and her love of dance, to create a unique halftime entertainment unlike any other in the country — even in the world. It was only later that a new definition had to be devised to describe it — the term “Precision Dance/Drill,” and her group, to be called the Kilgore College Rangerettes, would be the world’s first dancing girls on a sports field!

Miss Davis was employed after football season was over, so during the spring semester of 1940 she immersed herself in the P.E. department, instituting a variety of enjoyable activities for the female students. She introduced dance, archery, badminton, table tennis and shuffleboard. She also soon became known for teaching not only P.E. skills, but also the personal life skills which would ultimately enhance the lives of thousands of young women.

There were no try-outs for that first group in 1940. Gussie Nell chose all her girls from her P.E. classes. Her first criterion was physical coordination and a sense of rhythm. A trim figure ran a distant second, and facial beauty was almost never a consideration...

Under the leadership and training of Miss Gussie Nell Davis, the Rangerettes became known for their exquisite high-kicks, their incomparable precision and their exciting showmanship. Television sports announcer Red Grange was the first to nickname them the “Sweethearts of the Nation’s Gridiron.” A writer for the Chicago Tribune labeled the ‘Rettes “the gals with the misbehaving shoulders” after they captivated a record crowd of 96,000 at Chicago’s Soldier Field.

But Gussie Nell was not just content to direct a perfect line of dancers. She was a motivator long before the era of motivational speakers. She used her dynamic enthusiasm to infuse each young lady with the importance of standing tall, not only physically, but psychologically; to approach life with discipline and determination, even in the face of pain and/or obstacles; to believe in yourself and to use your God-given talents and skills to give 100 percent plus to any endeavor. Every Rangerette remembers “Beauty Knows No Pain!” She taught her girls that they would get the most out of life if they put the most into it!”

Jeanne Denman Hale, meanwhile, was honored for her many accomplishments, the chapter said.

“Jeanne Denman Hale, my mother, was born on October 31, 1924, exactly one year after her parents met at a Halloween party,” according to a biography provided by Martha Deen. “My grandmother was wearing a backless dress, and her sister had painted a black cat on her back. My grandfather told a friend, “I want to meet that girl with the cat on her back.” Well... they met, they married, and they had my mom the next Halloween!

“When my mom graduated from TSCW (now TWU) with a degree in speech, drama and journalism, she moved to New York City with hopes of becoming an actress. To pay the rent while she went to auditions during the day, she took a job as a chorus line dancer at night. But she was fired when the owner found her reading a book in the dressing room between performances. He told her she was supposed to be out front, drinking with the customers. She told the owner, ‘I was hired to dance, not to drink!’ Then, she decided to try out for the Radio City Music Hall Rockettes, and she made it. But she tore a groin muscle in rehearsal and went back to Henderson to recuperate. She met my dad, who was just home from World War II, and that was that!

“They raised cows and kids, four of them, including twins, my brother and I... She owned a dance studio in Overton for several years, and was Sandy Duncan’s first dance teacher! When I was 5, she was Mrs. Texas, and she was in the top 10 in the Mrs. America contest.

“When we were a little older, Mom went back to teaching, first at Kilgore Junior High, then Kilgore High School, and then at Kilgore College, where she eventually became the director of public relations and alumni relations. In that position, she directed several trips that the Rangerettes and Ranger Band made, to Venezuela, Romania and Hong Kong. She also had a bombshell of an idea... She created an alumni group whose goals were to support current members, foster camaraderie among years of members and raise money for scholarships… This alumni group became known as Rangerettes Forever. It was the first of its kind, and now Rangerettes Forever have raised well over a million dollars in scholarship funds.

“My mother was active through the years in church, scouting, PTA and community service. She authored a speech textbook and a couple of unpublished novels. She was a member of Mensa and also Intertel, which is the 10 percent of Mensa members with the highest IQs. At First Christian Church, she began the Young Adults Sunday School Class and taught it for 30 plus years. Along the way, they finally had to change the name to Young Adults Forever Sunday School class.

“She became a docent for the East Texas Oil Museum, where she used her computer skills to produce two cookbooks, as fund-raising activities. She also put together a cookbook for Rangerettes Forever called From Kicking to Cooking. She was an active member of the Guild of The Texas Shakespeare Festival. In recognition of her many civic accomplishments and contributions, she was named First Lady of Kilgore in 2000.”

Should Norfolk enforce a vaccine mandate?