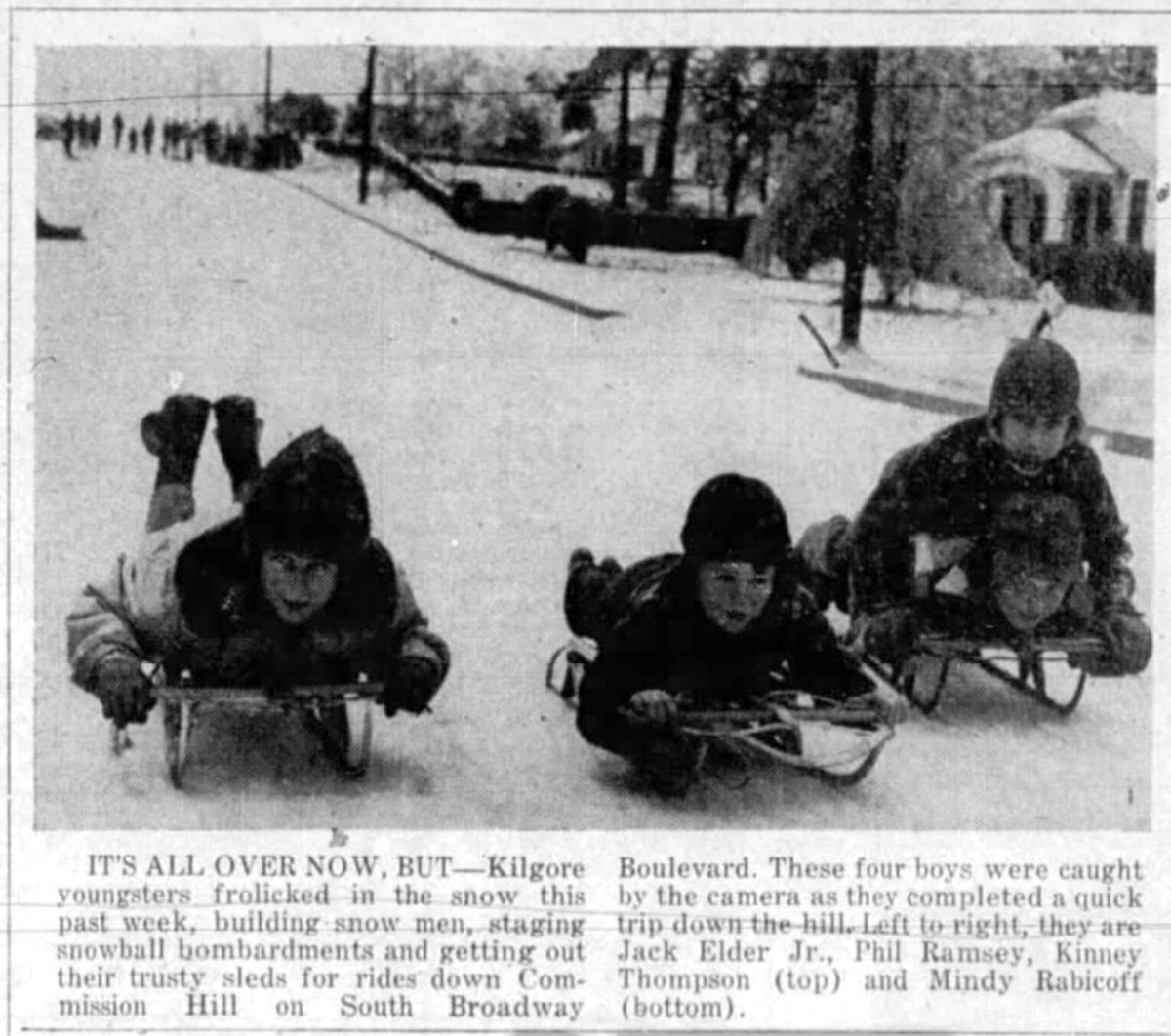 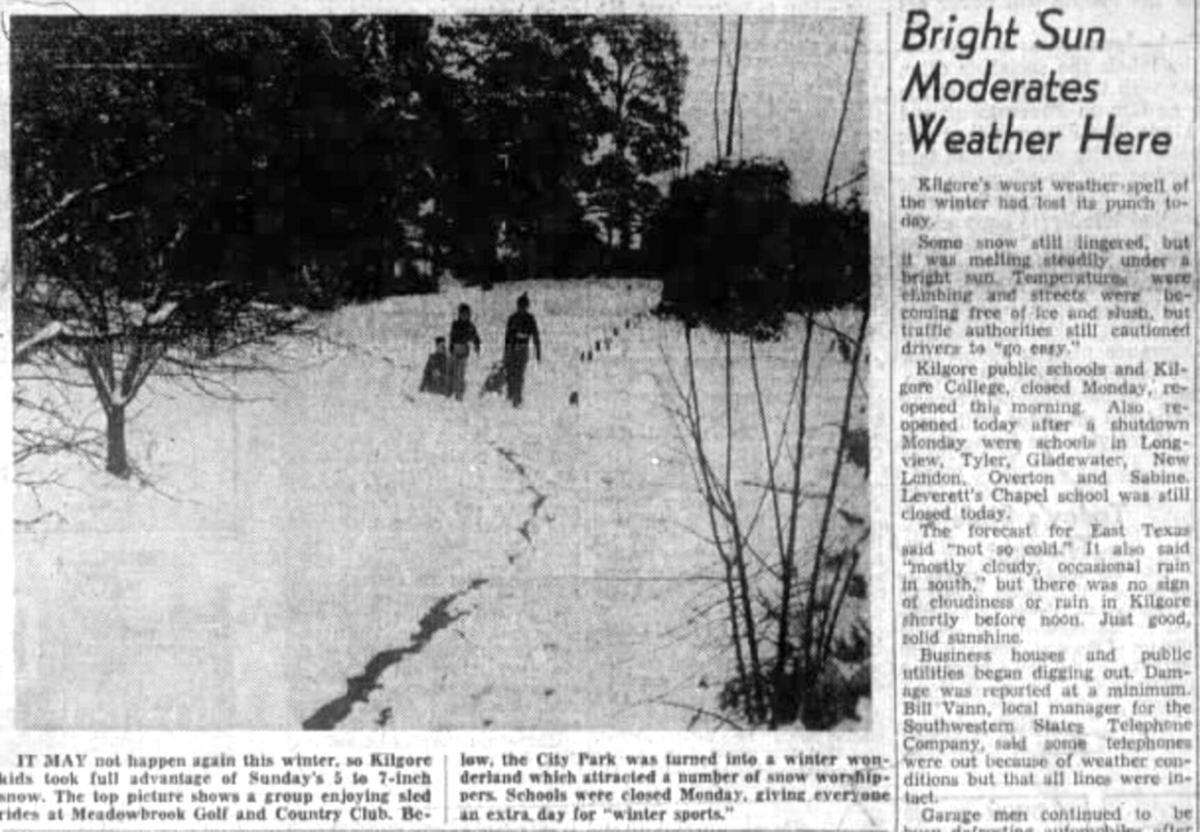 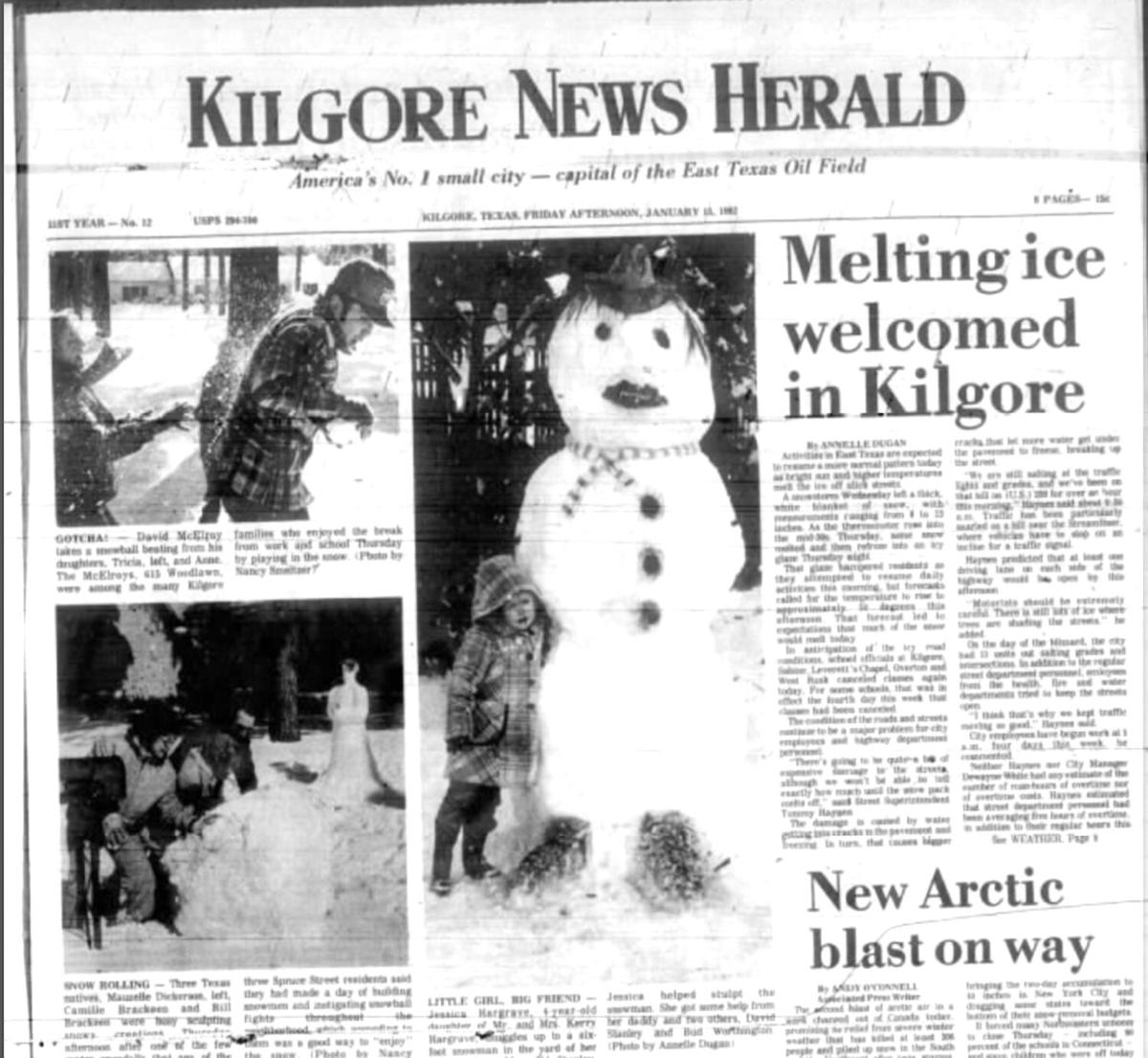 This week’s icy, frigid weather is not the first time Kilgore has been besieged by Jack Frost — even when it comes to longevity.

We decided to look back through the News Herald archives to see what Kilgoreites were up to during some of the coldest or snowiest days on record in East Texas.

Most of what the newspaper reported is the stuff we’ve been reporting this past week: Weather forecasts, school closures, city officials urging people to stay off the roads and lots of snow photos.

“Sleet and snow, borne on a wave of frigid arctic air, swept into Kilgore about 5:30 a.m. today, creating hazardous driving conditions and covering the city with a blanket of white.

Temperatures dropped rapidly in the wake of the cold wave. Gregg County Airport reported a reading of 43 at 1 a.m. and by 11 a.m. today it had plummeted to 24 degrees. More than an inch of snow had fallen in open places by noon and snow was still falling at noon.

The Feb. 4, 1951 reported the city had been laboring under freezing temperatures and snow, ice and sleet for about a week, exactly about how long this storm is supposed to be.

OLD SOL STILL DE-ICING CITY reads the headline. The storm that week hit Sunday and ended Saturday, with temperatures cracking 32 degrees at the Gregg County Airport for the first time after five days of snow.

January 1982 saw 8 to 13 inches of snow during one storm, and photographer Nancy Smeltzer was outside to capture a group of snow miscreants.

Mauzelle Dickerson, Camille Brackeen and Bill Brackeen sculpted snowmen “after one of the few major snowfalls that any of the trio had ever experienced. The three Spruce Street residents said they had made a day of building snowmen and instigating snowball fights throughout the neighborhood, which according to them was a good way to ‘enjoy’ the snow.”

“Kilgore’s worst weather spell of the winter had lost its punch today” the News Herald reported on Feb. 1, 1949.

“Some snow still lingered, but it was melting steadily under a bright sun. Temperatures were climbing and streets were becoming free of ice and slush, but traffic authorities still cautioned drivers to ‘go easy.’”