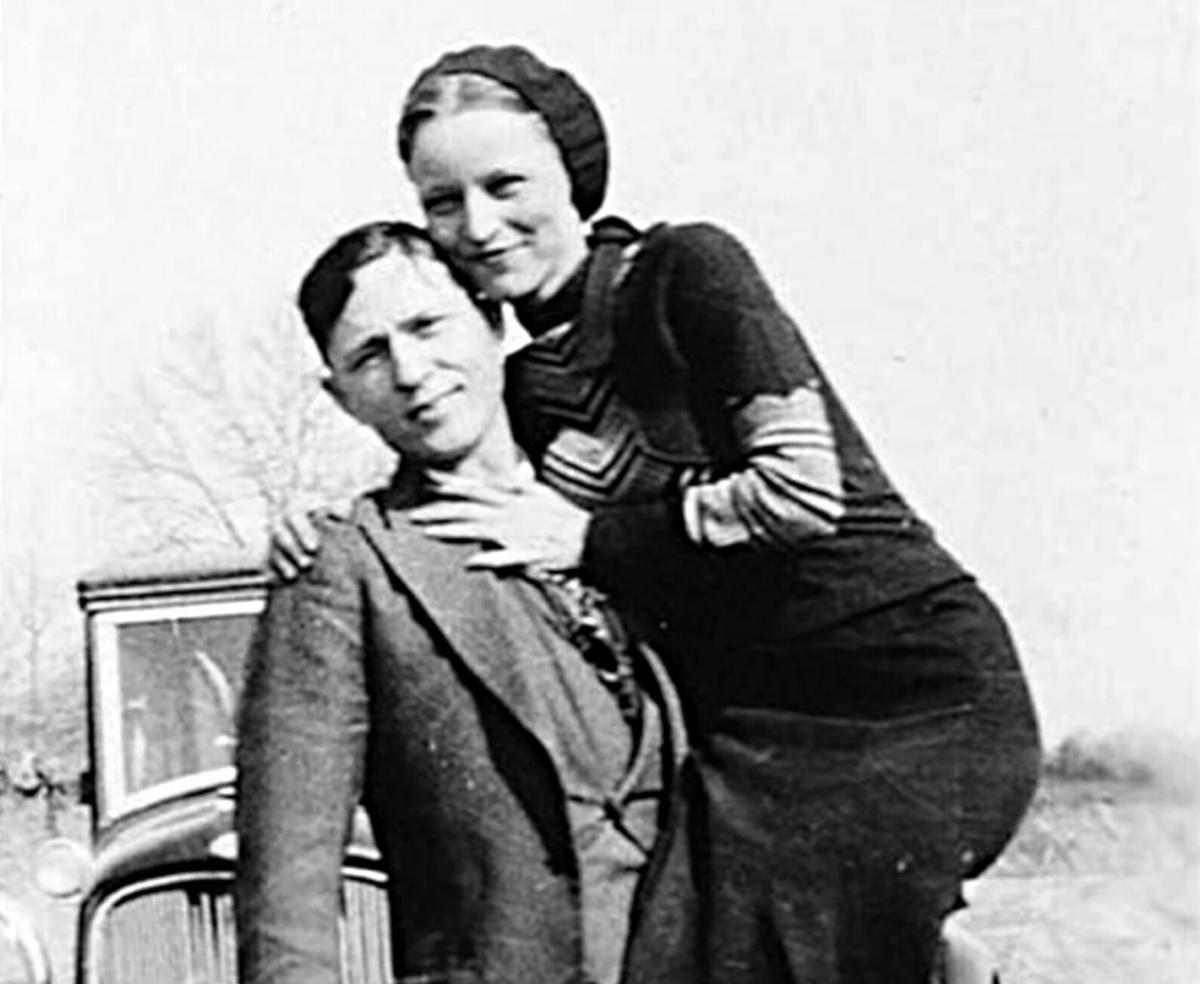 Clyde Barrow and Bonnie Parker are pictured in 1933. 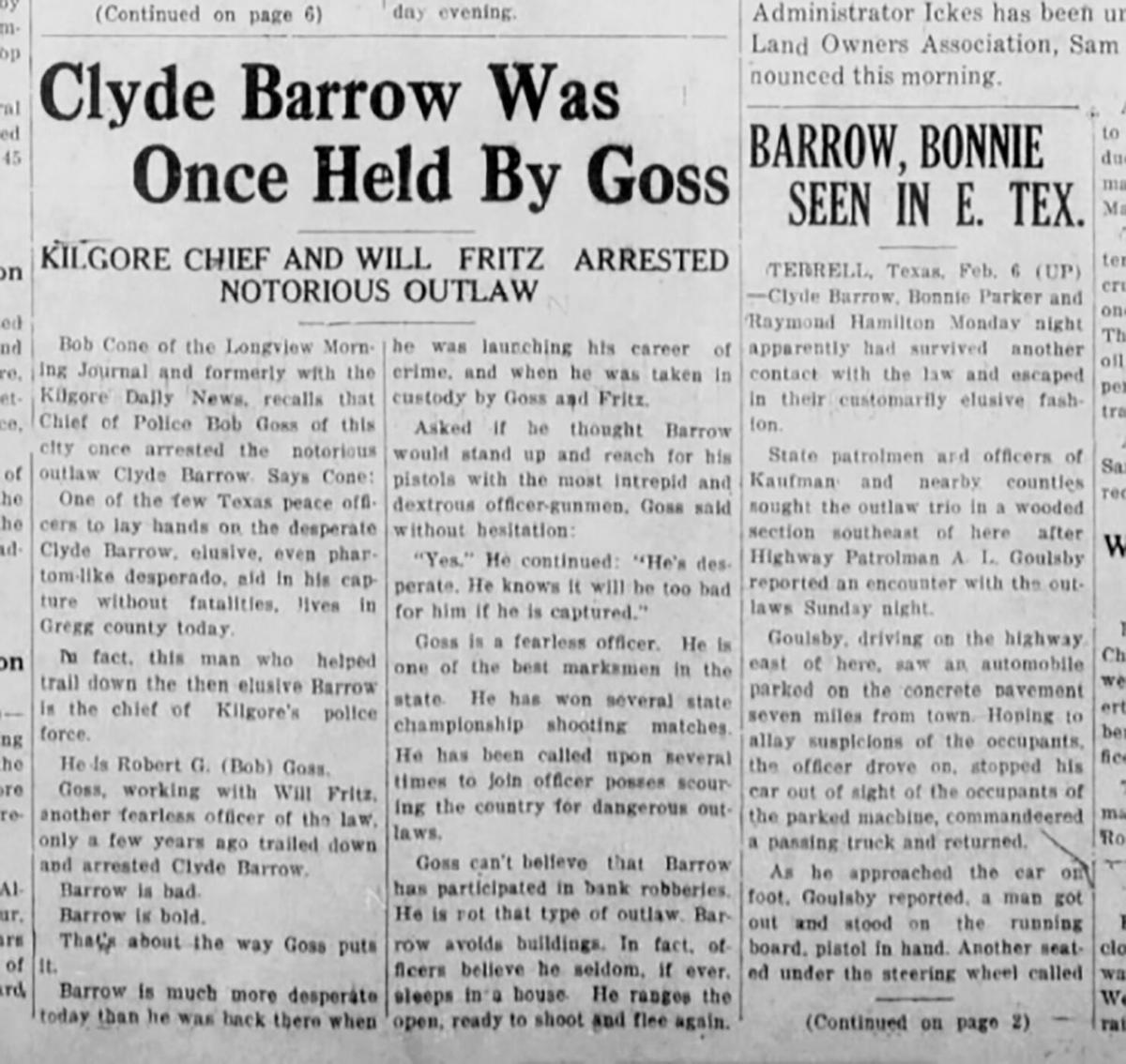 Clyde Barrow and Bonnie Parker are pictured in 1933.

Editor's Note: Hour Glass is a historical look at past Kilgore News Herald headlines that runs in Etcetera Magazine.

Look through any Texas newspaper in the early 1930s, and you'll see stories about the infamous Bonnie and Clyde. The Barrow Gang had no shortage of headlines, and everyone place to have their own story of a connection to the lawbreakers.

There are two interesting stories in the News Herald about Bonnie and Clyde, both from 1934. The first, on Feb. 6 a few months before the pair were killed by lawmen in Louisiana, details how Police Chief Bob Goss and a man named Will Fritz once arrested Clyde Barrow. The story sits next to another headline from that day: "BARROW, BONNIE SEEN IN E. TEX."

"Barrow is bad. Barrow is bold. That's about the way Goss puts it," the story reads. "Barrow is much more desperate today than he was back there when he was launching his career of crime, and when he was taken in custody by Goss and Fritz."

"Asked if he thought Barrow would stand up and reach for his pistols with the most intrepid and dexterous officer-gunmen, Goss said without hesitation: 'Yes,' He continued: 'He's desperate. He knows it will be too bad for him if he is captured.'"

Things did go too bad for the duo. And on the same day the pair were killed, May 24, 1934, the News Herald printed another story from Bob Cone detailing how a man in the Gregg County Jail was supposed to meet Bonnie and Clyde.

J.A. Nichols "melted only momentarily Wednesday when hew as told through the bars of his cell in Gregg county jail that the desperate pair had met the fate which they have meted out to probably a dozen persons during their long reign of terror throughout the Southwest," Cone wrote. "Himself a man whose admitted wrong-doings have placed him in the position of the hunted, Nichols merely dropped his head and stood thinking. He said nothing. He turned stole and stern and reticent.

"Nichols admitted nothing to newspapermen — until they told him the background of their stories — his information to officers. Then he said, and emphatic enough, 'Everything you heard is true!'"

Nichols had apparently stolen a car in Dallas to deliver guns or ammo or both to Barrow at his parent's farm near Quitman following a prearranged signal. Nichols was later arrested in Gladewater by law enforcement after they learned of a possible meeting — with officials believing that Nichols' arrest and some other information caused Bonnie and Clyde to flee Quitman to Louisiana, where they would later perish.

"The Longview incident is considered by officers to have direct, and strong, bearing on the final outcome of the long Barrow hunt."

Meredith Shamburger serves as the regional editor for Carthage and Kilgore. She has previously worked at the Longview News-Journal, the Marshall News Messenger and The Dallas Morning News. Meredith graduated from Southern Methodist University in 2011.