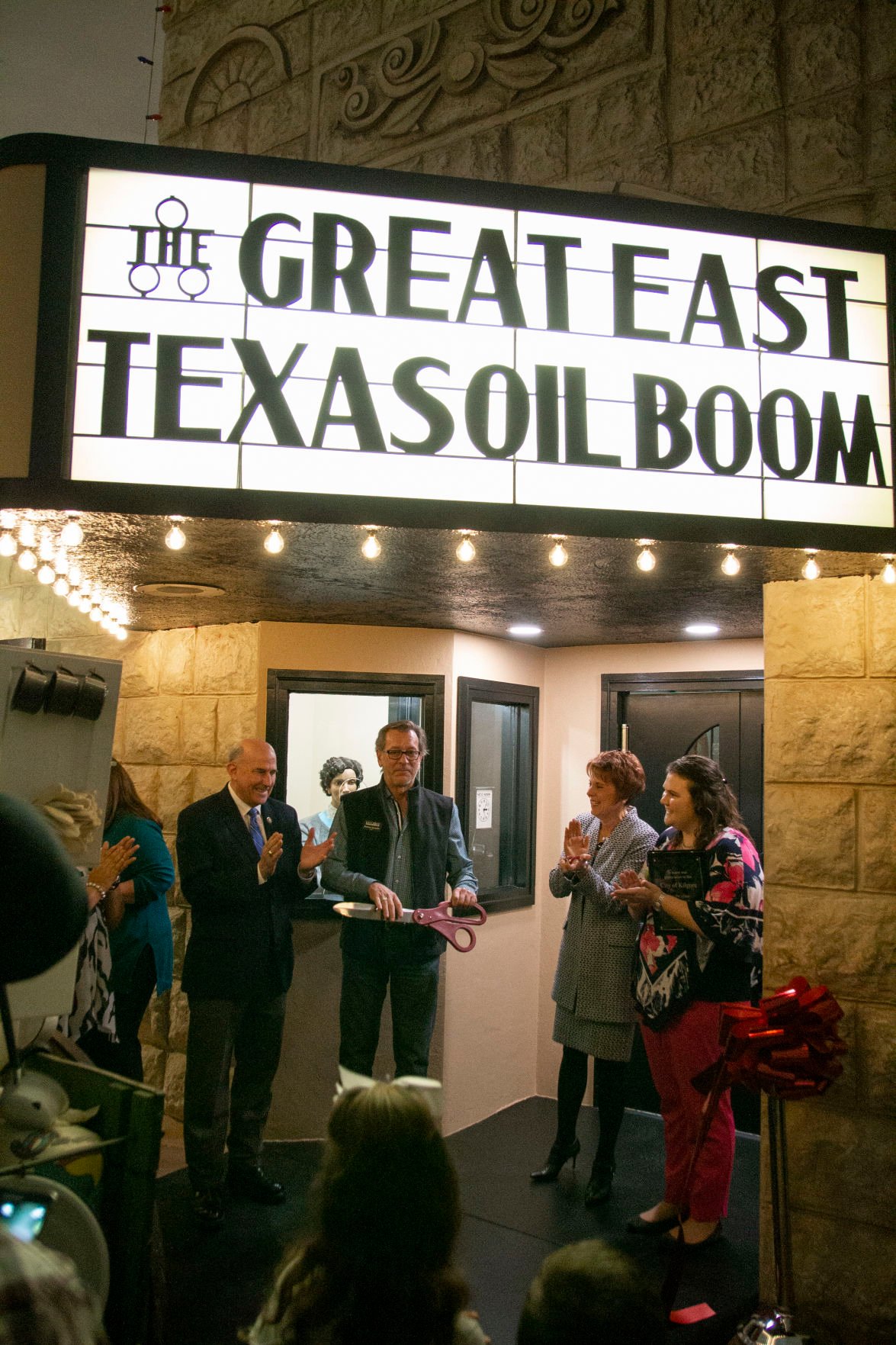 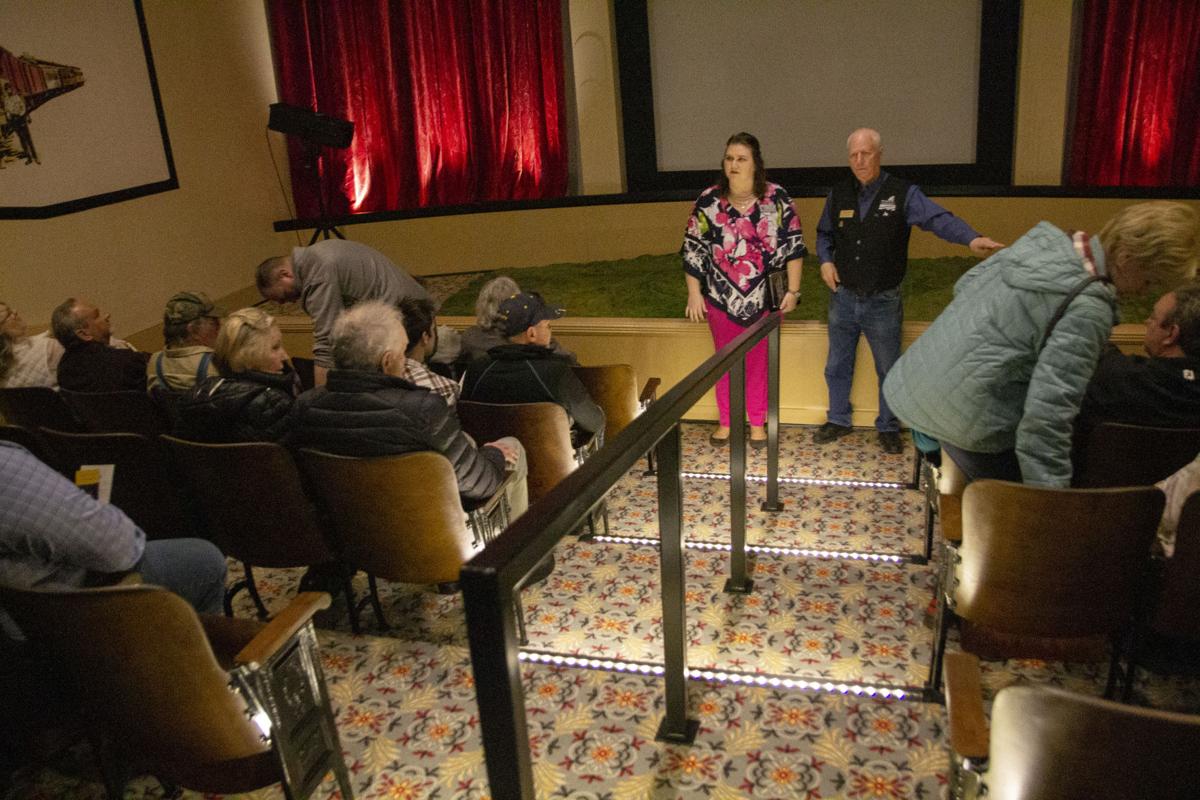 ETOM Manager Olivia Moore and volunteer docents directed guests to their seats in the renovated Boomtown Theater during its grand reopening Saturday, Feb. 1. Guests laughed and applauded the film, which includes 90-year-old archival footage of the East Texas Oil Boom.

ETOM Manager Olivia Moore and volunteer docents directed guests to their seats in the renovated Boomtown Theater during its grand reopening Saturday, Feb. 1. Guests laughed and applauded the film, which includes 90-year-old archival footage of the East Texas Oil Boom.

Before the ribbon-cutting, Kilgore College President Dr. Brenda Kays welcomed guests to the event in the museum’s conference room. The room was filled to capacity, with nearly all seats taken, and special spots reserved for Kilgore Mayor Ronnie Spradlin and U.S. Congressman from Texas District 1, Louie Gohmert. Also in attendance were members of the KC Board of Trustees and Board of Directors.

“Since the East Texas Oil Musuem’s inception in 1980, one of its most popular attractions has been the Boomtown Theater,” Kays said.

“Thousands of visitors over the years have learned about the rich history of the East Texas Oil Boom, a history that took place right here in our backyard by watching ‘The Great East Texas Oil Boom’, a movie in the theater. Now, that movie has been digitized and it will last from this point forward into a state-of-the-art production and the theater has received major upgrades and renovations to improve the experience of our guests to the museum.”

Kays noted the theater improvements were one part of a two-year ETOM renovation project which has “really enhanced the experience” for museum visitors. The project also included new paint and carpeting in the museum and will, in the future, improve the exterior of the museum as well. Much of the renovation has been overseen by ETOM Manager Olivia Moore.

Kays said the renovations to ETOM were first envisioned by former museum manager and current city council member Merlyn Holmes, as part of the college’s celebration of the museum’s 40 years in operation. Holmes’ passion, Kays said, was carried on when Moore was named the new ETOM manager in spring 2019 when Holmes moved to KC’s Institutional Advancement Department.

“She was able to pick up Merlyn’s vision and run with it while adding her own special touches and personality,” Kays said.

Kays acknowledged and thanked the city of Kilgore for their financial support of $140,000 towards the renovation project and announced Moore would hang a commemorative plaque in Boomtown Theater memorializing the date of the reopening.

Following the comments in the conference room, Kays, Spradlin, Holmes, Moore and Congressman Gohmert took up their places at the entrance to the Boomtown Theater in the renovated Boomtown exhibit. Spradlin raised an oversized pair of scissors to cut the red ribbon and let in the ticket-holders who would enjoy the very first showing of the digitized and improved film.

The film, and the presentation preceding it, is largely unchanged from its original form. The most significant changes to the film are improved picture and sound quality, thanks to the digitization process, as well as a new and improved ending. Moore said longtime ETOM patrons need not worry; the new ending preserves the original audio narration, as well as the special “surprise” which accompanies the end of the film.

The museum is open Wednesday-Saturday from 10 a.m. to 5 p.m. Normal admission is $8 for adults, $5 for children ages 3-11 and KC students and employees. Children 2 and under get in free.

For more information, call the museum at 903-983-8295. ETOM is located at 1301 S Henderson in Kilgore and is currently hosting a special exhibit on the history of the Big Inch Pipeline, which began in Texas and played a pivotal role in the Allied effort in World War II.