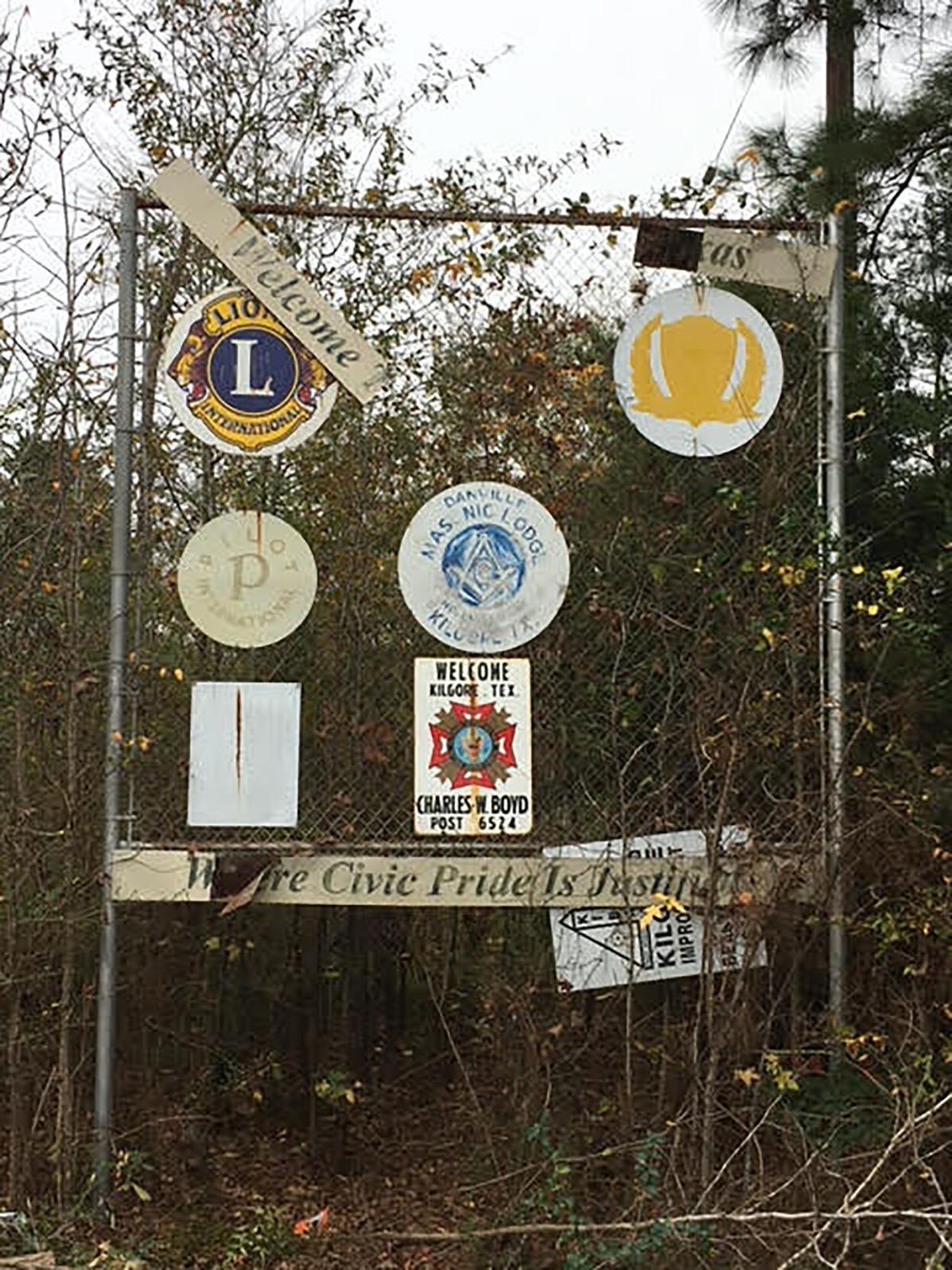 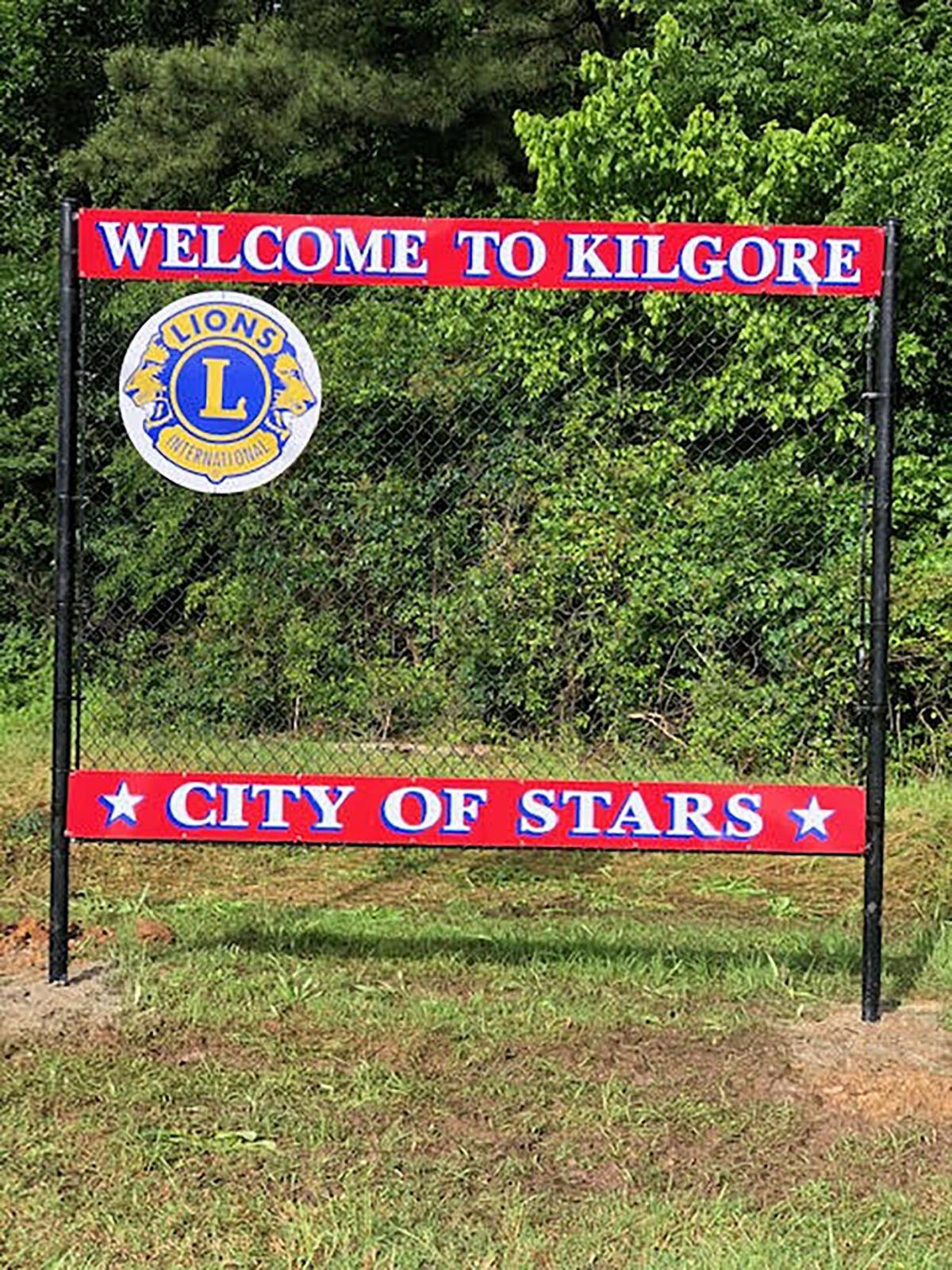 Randy Renshaw replaced old welcome signs with his own. 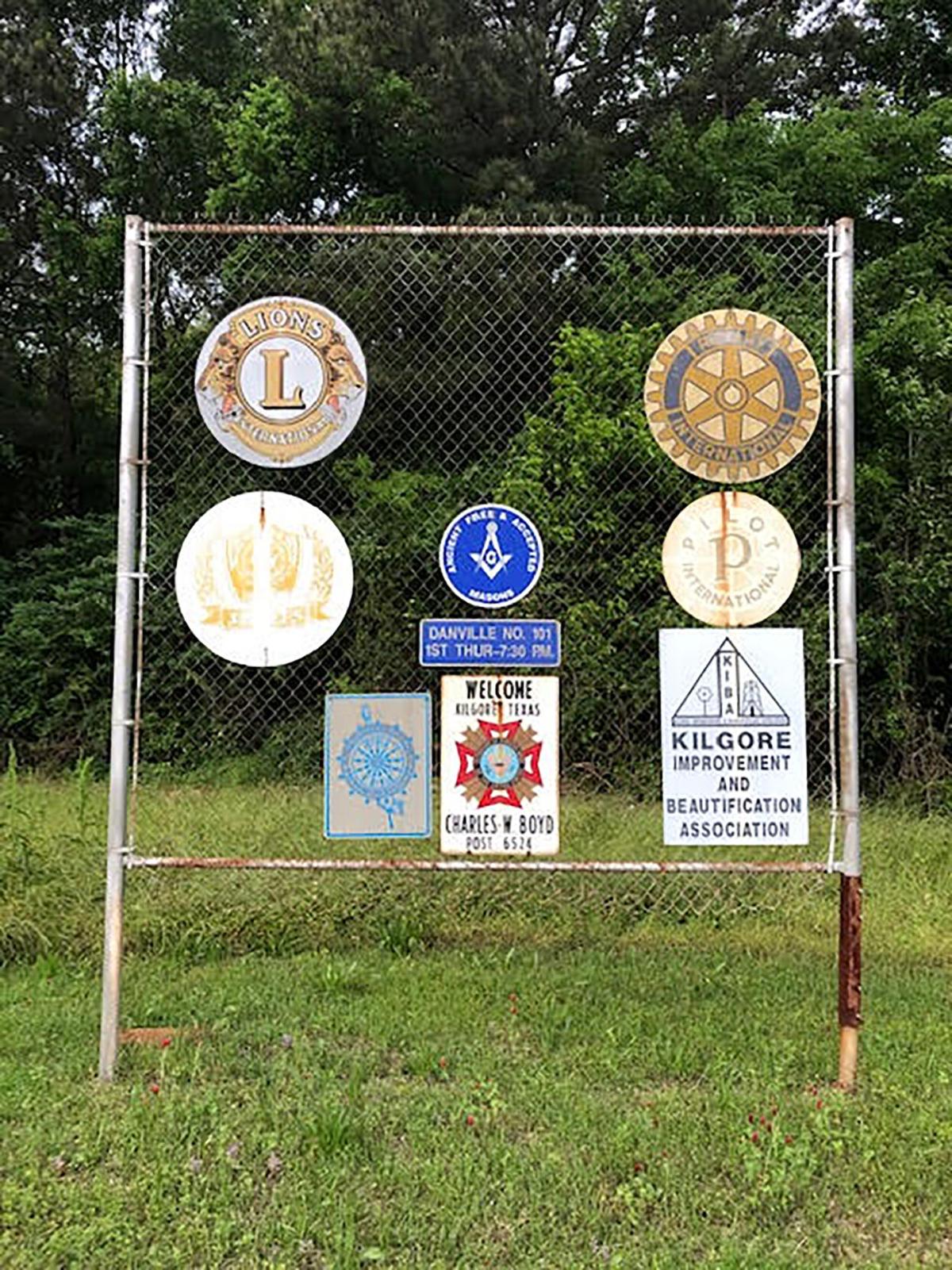 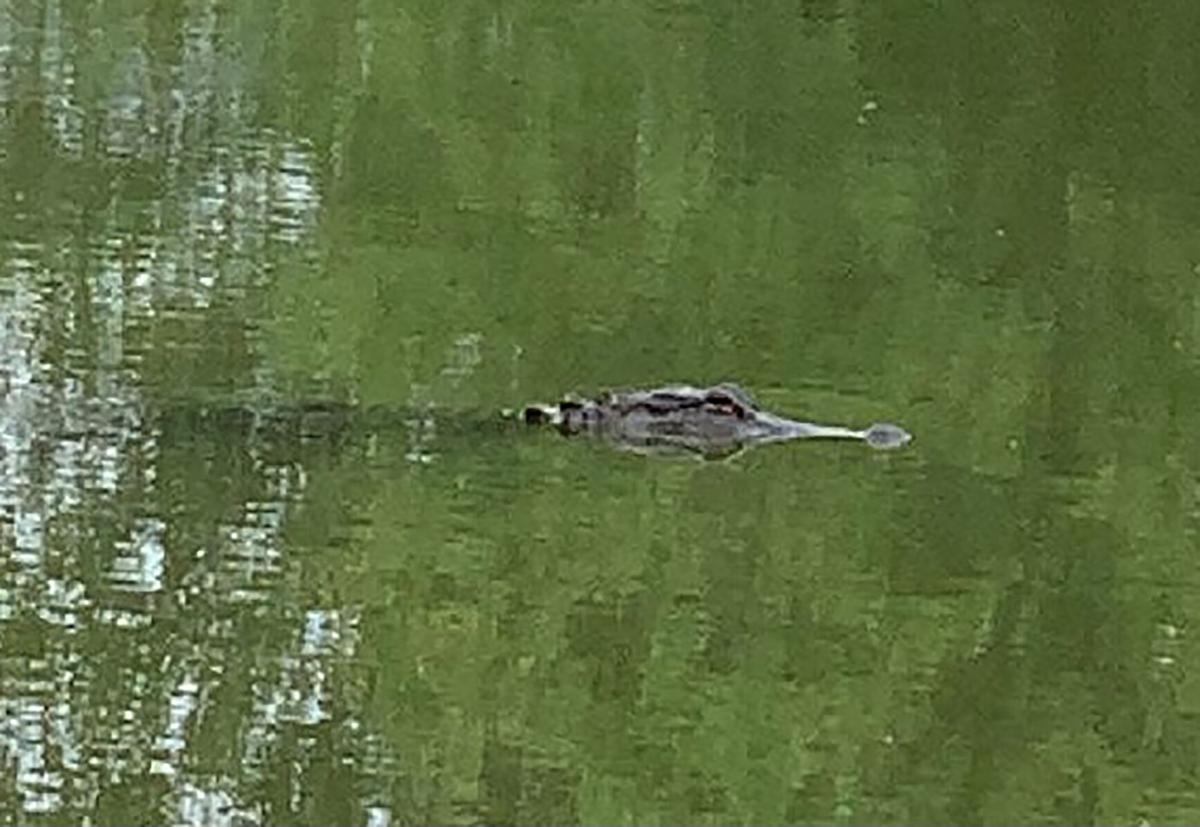 An alligator found on a farm pond belonging to Don and Diana Ponder off of Texas 31 is seen deciding to have a Memorial Day picnic of his own.

Randy Renshaw replaced old welcome signs with his own.

An alligator found on a farm pond belonging to Don and Diana Ponder off of Texas 31 is seen deciding to have a Memorial Day picnic of his own.

Signage is an integral part of any city, as it lays the groundwork on what visitors and those looking to relocate can expect to find within the perimeters of the community.

“Welcome to Kilgore” and “Where Civic Pride is Justified” (Kilgore’s former motto) were the signs on the top and bottom of chain link panels that displayed the emblems of Kilgore’s civic, fraternal and veterans organizations according to Randy Renshaw, a Lions Club member for 42 years and a 9-year councilmember for the City of Kilgore.

“There were at least four of the displays that I recall: Highway 259 North, Highway 259 South, Highway 31 East from Tyler and Highway 42 South,” he said. “They had long since deteriorated, became overgrown and the welcome signs rotted away. It is not clear who initially installed the signs. Perhaps it was the Chamber of Commerce or some civic-minded group. The original emblems on this sign were Lions International, Rotary International, Jaycees, Danville Masonic Lodge, Pilot International, DAR, VFW and KIBA.

“About 5 years ago, a project to restore the sign panels was presented to the Kilgore Lions Club Board of Directors. The proposal was discussed, but no action was taken and the project lay dormant. However, I proceeded to obtain several bids to replace the chain link panels, but nothing was accomplished.

Then, in 2019, the idea resurfaced and I asked Rick Williams with Rick’s Sign company to design new signs for the panels “Welcome to Kilgore” and “City of Stars.” He did an excellent job and the signs were quite impressive. However, interest in the project waned again and nothing was started on the project.

Since the first time this project was discussed, when I would drive by the sign just south of Kilgore Tire, I was embarrassed by the condition and thought what a bad example it set for Kilgore’s civic organizations. Recently, I became more frustrated with the lack of action by the Lions Club and decided to take on the project myself.

Not counting the Loop or the By-Pass, there are at least seven other entrances that would benefit from the Welcome signs including Highway 259 South, Highway 42 North and South, FM 2204 (Stone Road), FM 349, Highway 135 South and Highway 31 East from Tyler. The Lions Club is currently talking about refurbishing the one on Highway 31.”

One caveat, he points out is the signs must be on private property as they cannot be located on state right-of-way.

“Stimulus, stimulus, stimulus! It seems that’s the buzz word at the present time,” Randy continued. “Perhaps this will “stimulate” other civic groups or non-profit organizations to “adopt” a highway entrance and donate a new panel.”

KILGORE, the “City of Stars” and Where Civic Pride is Still Justified!”

DIANA AND DON PONDER are known for the uniqueness of “critters” found at their Kilgore residence, but this last weekend they were at their farm working when they discovered an alligator had taken over their pond. It was a real one and not the stone one you may have seen at the “in-town” home. They didn’t know what to do about getting the alligator out and called the game warden. It seems he wasn’t too anxious to wrestle with it and just suggested it might wander back off.

“The gator did vacate the premises on Sunday evening,” Diana said. “Thank goodness! There is no telling how much of my fish he devoured before leaving. The warden did say it is mating season; the alligator may have gone to higher ground looking for one! Those who live off Highway 31 and County Road 3791 may need to be on the look-out for a wandering alligator.”

DON’T YOU JUST LOVE IT when someone says, “you kind of needed to be there?”

That happened recently when we received a call from Dale Hedrick, the brother of Bill. It seems Bill had shared a story that struck Dale so funny he was laughing so hard he could barely tell me “just call Bill,” and that we did.

“You just had to have been there,” he said. “My Cousin David Ligon and I were best buddies. We would play together growing up, hunt together, fish together, you name it and we did it. David was all the time trying to come up with ways to make money. When we were about 9- or 10-years-old, he had this hair brained-idea for us to paint house numbers on the curbs. He found out you could get paid $5 per house to paint the number on the curb, and we got to thinking how much money we would earn.

“Keep in mind we were young and we didn’t know anything about paint, whether or not it was oil-based, water-based, outside or inside paint — paint was paint. I rummaged around in Dad’s garage and found black paint and white paint. Then we went to Whackers or Duncan’s dime store and found stencils and paint brushes. Eureka! We were in business.

“Off we went to the Parkview area where there were a lot of houses and we were told “No, thank you” many times after knocking on the doors. But, we did find one old man that said, ‘Sure, go ahead.’

“We march out to the curb and unloaded; held that stencil to the curb and painted the square. We waited and waited for the paint to dry but it stayed sticky. After all, we had seen this dozens of times in the movies — you just slap that paint right on and you are set. So, I held the stencils for the numbers and he slapped that paint on it and it was an awful mess. I ran to get rags to clean up the smeary mess and we repainted the square white.

“David said, ‘follow me,’ and he went to the door and told the man, ‘due to the humidity and what-not the paint is taking much longer than we expected. Can we have half of the money now and come back later to finish it?’ The old man finally agreed and gave us half of the money.

“As we were riding off on our bikes, I asked David when were going back. He said, “are you kidding me?” We rode off and never did go back. Years later, you could drive by that house and there was that white block with no numbers on it. I always felt real bad about it, but was kind of afraid to approach the man after a length of time. If I knew the man was still alive today, I would go back and paint those numbers on that square.

“One thing for sure, that was it — no more painting curbs for me!”

BY THE WAY, according to Bill’s mother, he was the first paper delivery boy to come up with the idea of providing envelopes for people to send their newspaper payment in. His Sunday School teacher Rue Taylor helped him design the envelopes. It worked for him on his route and others later picked on it and gained the credit to his dismay.