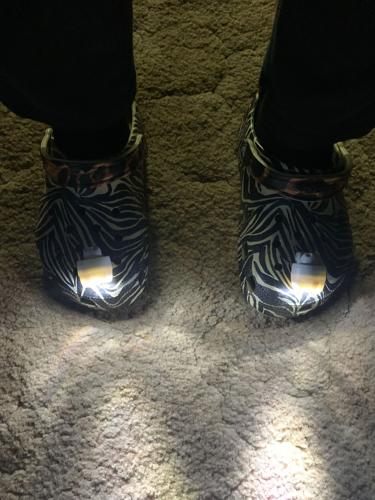 We have all heard the phrase “it’s a crock,” which in our neck of the woods mean you are full of it — otherwise silly or filled with foolishness. The term was kind of revived when in 2002 the Crocs Company introduced a shoe made of a revolutionary material called Croslite. The Croslite technology held unique characteristics that allowed it to perform on both land and in water, which was new to the footwear industry. The company was named Crocs after the amphibious nature of crocodiles, and their goal was to provide fun, innovative and comfortable footwear for a variety of lifestyles. Their simple design, versatility and colorful array have lead them to have now sold over 100 million pairs of the shoes.

For Kilgoreite Diana Ponder, there is no better shoe made that can provide the comfort she gets for wearing them. She does not mind telling people “It’s a Croc!”

Such was the case a couple of weeks ago when she and her husband Don went to their favorite watering hole (Circle Café) for their lunch.

She said, “As we were going to our normal table, we passed by a booth that had Mayor Ronnie Spradlin and City Manager Josh Selleck eating their lunch. I had on this kind of wild zebra print Croc, and Ronnie told me he liked them. Then he told me I needed the Croc lights to go with them. I thought he was teasing with me until he informed me I could get them off Amazon.

“He must have known I am not a computer person, as a few days passed and I came home to find a small box from Ronnie on my door step. Now, I have headlights for my Crocs! They are super cool!” she laughingly said. “They slip through the holes near the toes and look like tiny headlights …and they blink off and on from a slow to fast pace! My Croc lights are just so much fun!”

Diana has eight screws and a plate in her foot. She said, “Everyone that really knows me understands that Crocs are the only comfortable shoe I can wear and I have no other brands in my closet.” She claims to have dozens of them. During the holidays, her grandson Dakota was in Dallas at a Croc store and called her. He walked up and down the aisle showing her the shoes on the phone and buying the ones she didn’t have in her collection. It may be a Croc; it gives her comfort and fun, and she will gladly tell you headlights or footlights it is well worth the laughter and it’s not the first time Ronnie has provided the “help” when needed.

KICKING RIGHT ALONG is the Kilgore High School Class of 1959, who meet every first Monday of the month. For years, the meeting took place at McKay’s Ranch House but a change of pace took place and now it is held in the meeting room at The Back Porch.

Bob Barbee said, “Sometimes there are a few and sometimes there are many that come to the meeting. This month, I was sitting there with just two or three others for the longest and was beginning to be a little sad that was all that was there, but before it was over 15 from our class had arrived.”

Several come from the Longview area and one comes from Gilmer, but one couple makes a turnaround trip each month from Fredericksburg. That couple is Rogers and Haazra Mays.

Rogers said, “Yes, we make the drive each month,” said Rogers. “We’re getting pretty old and want to stay in touch with all the people we know.”

“We want to visit with the kind hearts there,” said Haazra.

The couple rises at 4:30 a.m. and starts their journey to Kilgore by 5:30 a.m. After the meeting, they head back home all in the same day.

The couple has had two accidents in their trips to Kilgore. “We hit a deer and totaled our car in the first accident, and this month we were rear ended in Athens and received $3,500 worth of damage to the car,” said Rogers. “But, yes, weather permitting we do plan on going to the February meeting.”

Rogers has been an engineer in the aerospace industry most of his life and he met his lovely wife Haazra while working in the Netherlands.

“They are a lovely couple and close friends,” said Charlene Hellen Moore. “My late husband and I have been on trips with them and had a great time. We may all be 80, 81 or 82 years old, but we are still kicking and planning to keep on kicking.”

We hope you do just that.