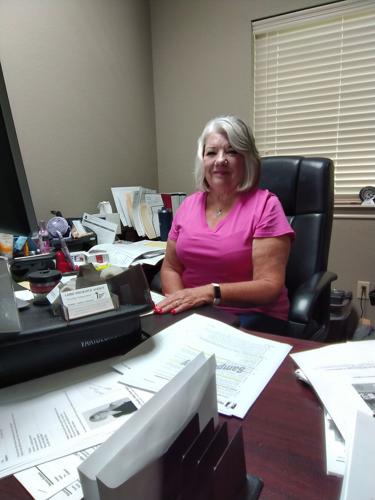 Norma Caskey-Graham started her lifelong career at Laird Insurance Agency in 1972 and is celebrating 50 years with them.

Norma Caskey-Graham started her lifelong career at Laird Insurance Agency in 1972 and is celebrating 50 years with them.

The year was 1972, a time when the No. 1 song was American Pie, “The Godfather” was the box office hit and gas prices reached a soaring $1.59. It was also the year Norma Caskey-Graham began a lifelong career that has now lasted 50 years and holding.

That home for her is Laird Insurance Agency in Kilgore.

A native Texan, she was born in Gregg County to the parents of Raymond and Jean Marie Denmon and was the next to the youngest of three sisters Margie, Sandy and Paula.

Norma graduated from Sabine High School in 1971 and graduated in 1972 from the Bish Mathis Institute and Nancy Taylor Finishing Course. Norma said, “I went out immediately and started filling out applications. When I dropped an application off at Kilgore Insurance Agency, they told me it was nice and would keep it on file, but they were not hiring. They didn’t know at the time one of the ladies was leaving, and I was hired by J.B. Downs two days later. That was June 1972, and I have been here ever since.”

“There were no computers at the time,” she continued. “Helen Baker and I did all of the insurance forms. She wrote them out by hand and I typed them. We also did all the ratings and everything by hand and mailed all of the applications into the company. If accepted, they would mail the policy back to us. There were no computer generated forms and immediate online acceptance, “ she reiterated. “At the end of the every month, the bookkeeper and I would pull out a ledger and type out statements to customers. Times have definitely changed — today, most people would not know how to act without computers.”

Kilgore Insurance Agency and Laird Insurance Agency merged in 1993. Norma worked as a clerical/typist until 2010 before getting her insurance license in personal line property and casualty, operating as an independent agent for the company.

“We moved to our present location on Stone Road in 2004. We do shop around to help customers out to find the lowest prices for their needs. Our older customers do not like apps and do prefer to come in and discuss things face to face.”

At present, Norma has no plans for retirement. “As long as I can get up in the morning, come into the office and be active, I don’t want to retire,” she said. “That active part may change.”

She was married to the late Will Graham. She has a stepson living in Michigan and a daughter living nearby in Sabine. She enjoys working in her yard and watching her 14-year-old grandson play baseball. She likes parties and has made special plans for her upcoming 70th birthday with her daughter, Caroline Hardee and friends.

Fifty years at Laird Insurance Agency not a problem for Norma. “It’s a Christian family. We say our prayers before each meal, we have fun at Christmas parties and if you have to take off for personal reasons, they don’t say a thing other than ‘Do what you need to do’ and your work will be covered,” she said.

Robbin Hedrick, office manager said, “When it comes to insurance, she definitely knows her stuff, shows up on time and is loyal to the company.”

Bobby Beane and Harvey McClendon echoed those sentiments when saying, “We are very proud and fortunate to have Norma here with us. She has reached a fabulous milestone. Step in and help us celebrate her work anniversary on Wednesday, June 15 from 2 to 4 p.m.” Laird Insurance Company is located at 2700 Stone Road. Help them make Norma’s party even better than their Christmas parties.

THE DANVILLE CEMETERY ANNUAL PICNIC has been scheduled for 11 a.m. June 23. There will be a covered dish luncheon, short business meeting and a short service, according to Morris Hollowell. “Everything short except the eating time,” he said. Guest speaker will be David Hamilton. See you under the pavilion!