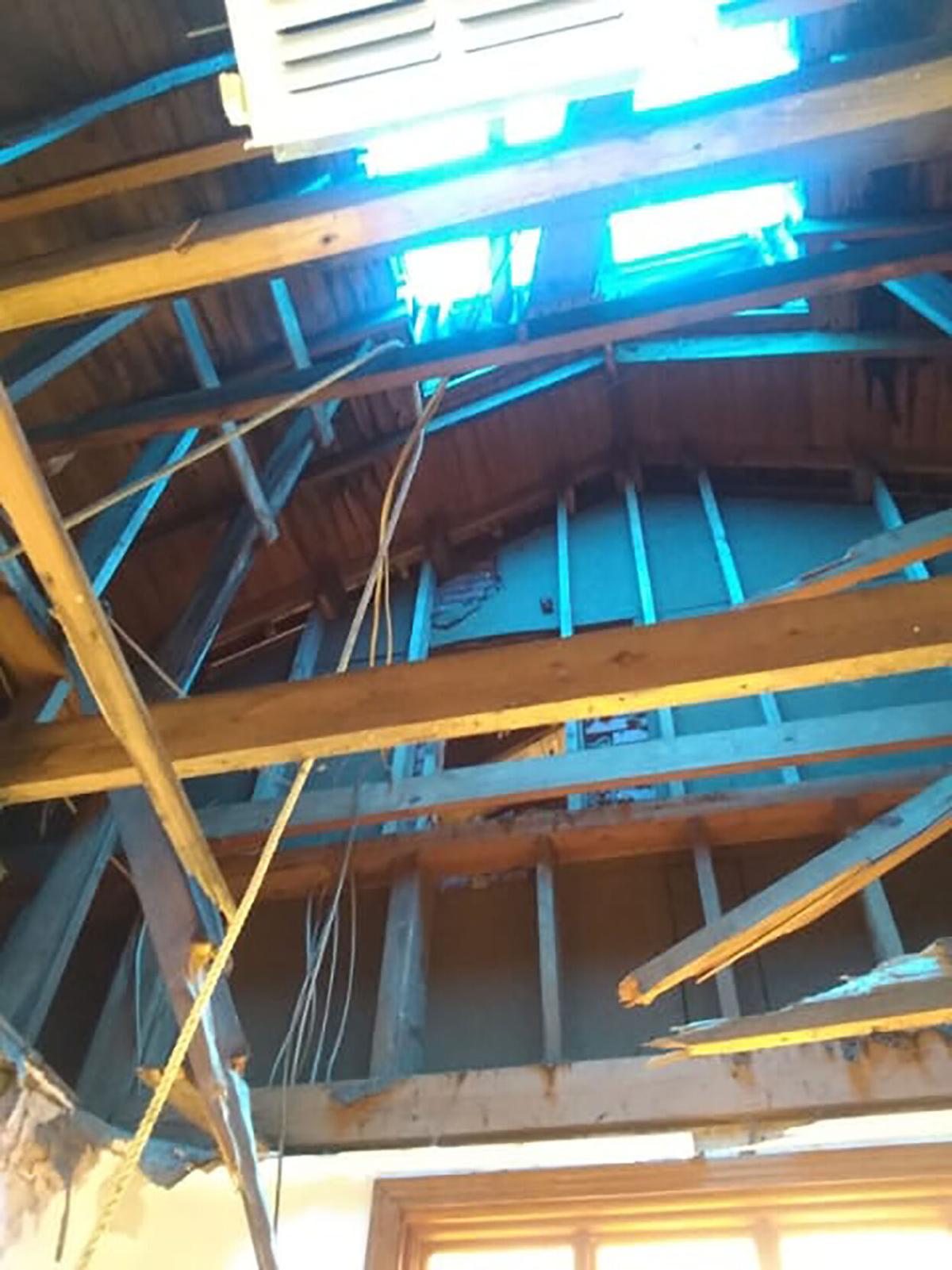 The church’s steeple was torn off and tossed to the ground beside the church. The bell tower at Mt. Enterprise FUMC collapsed during the tornado. 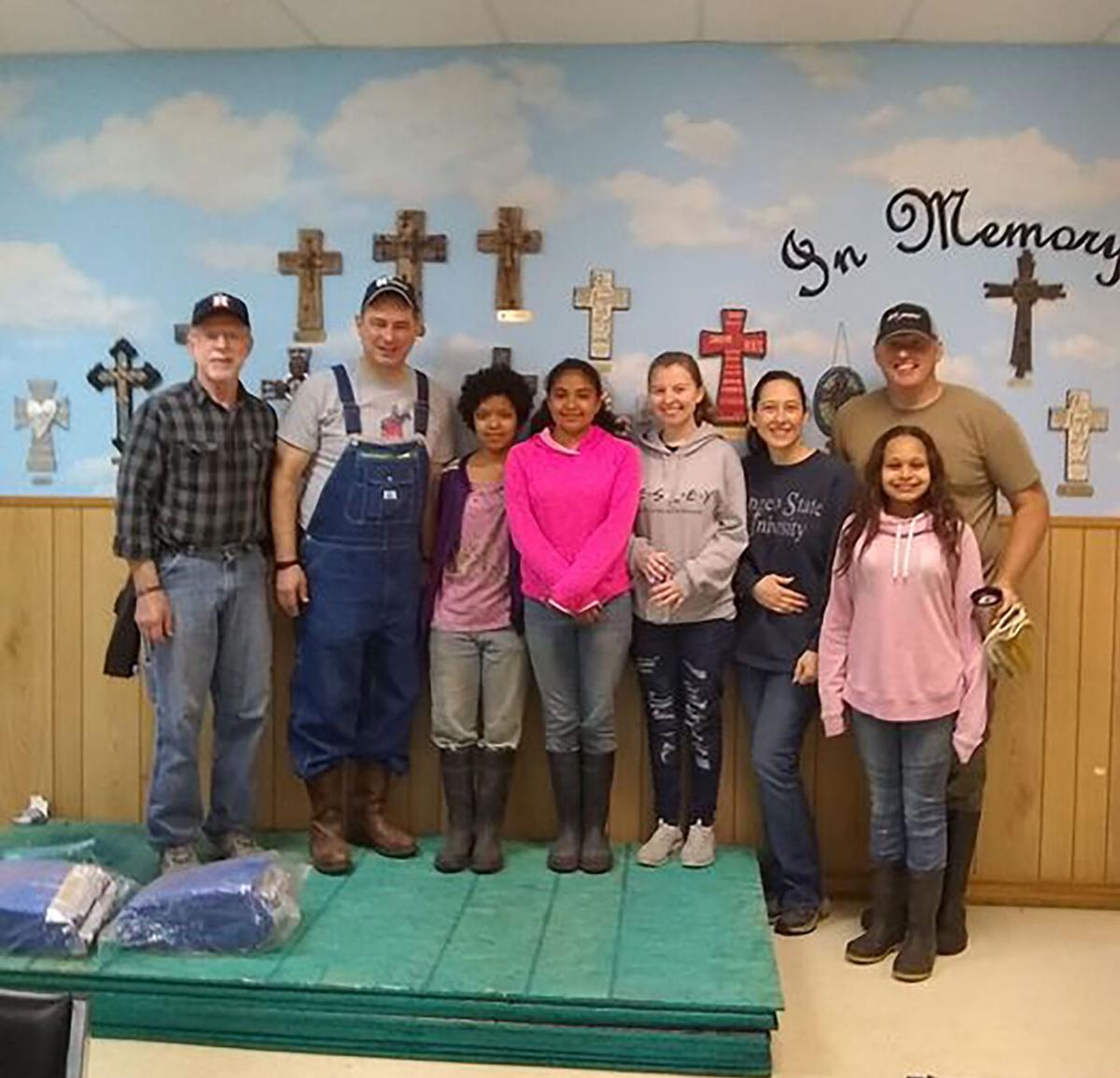 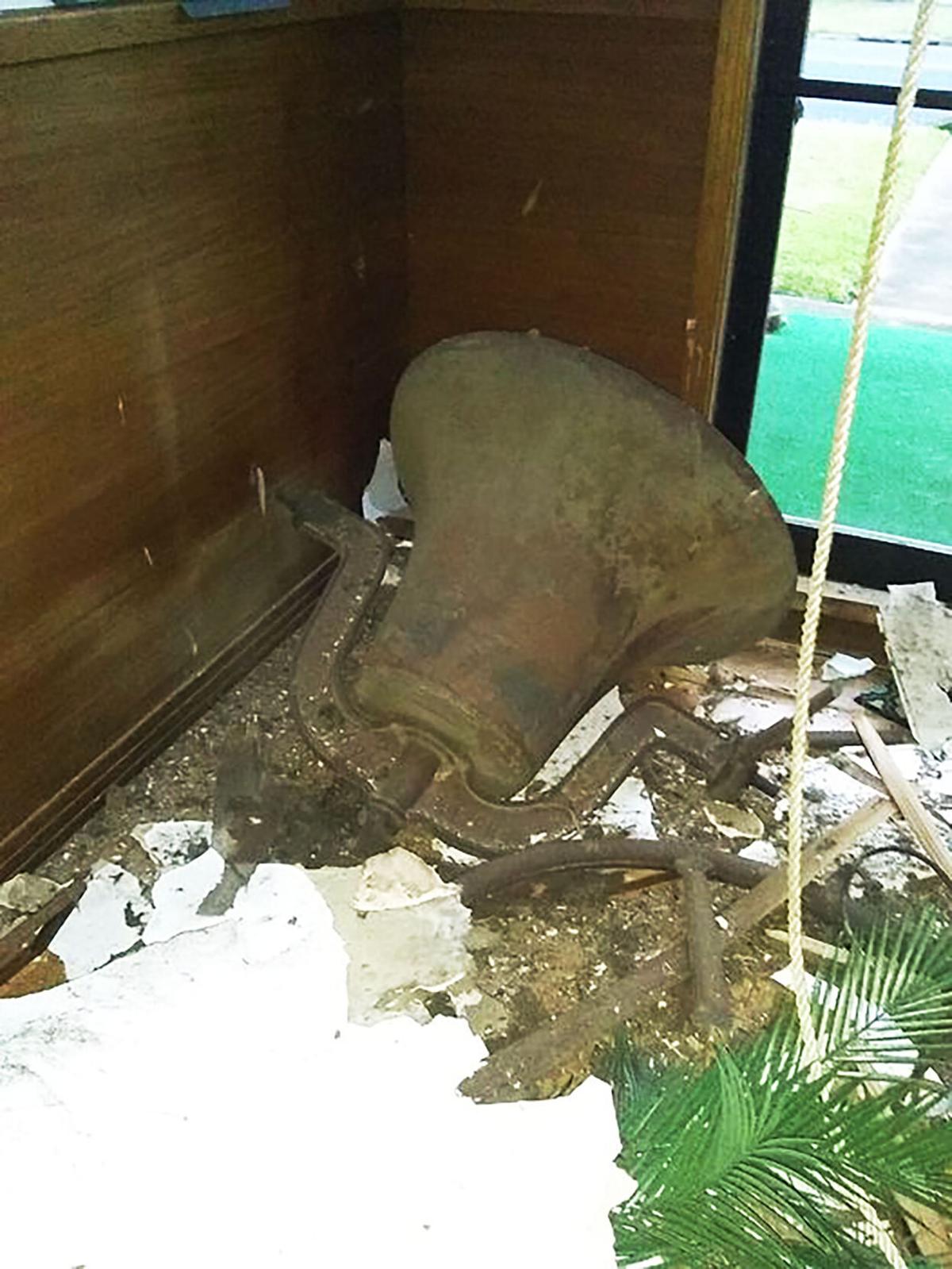 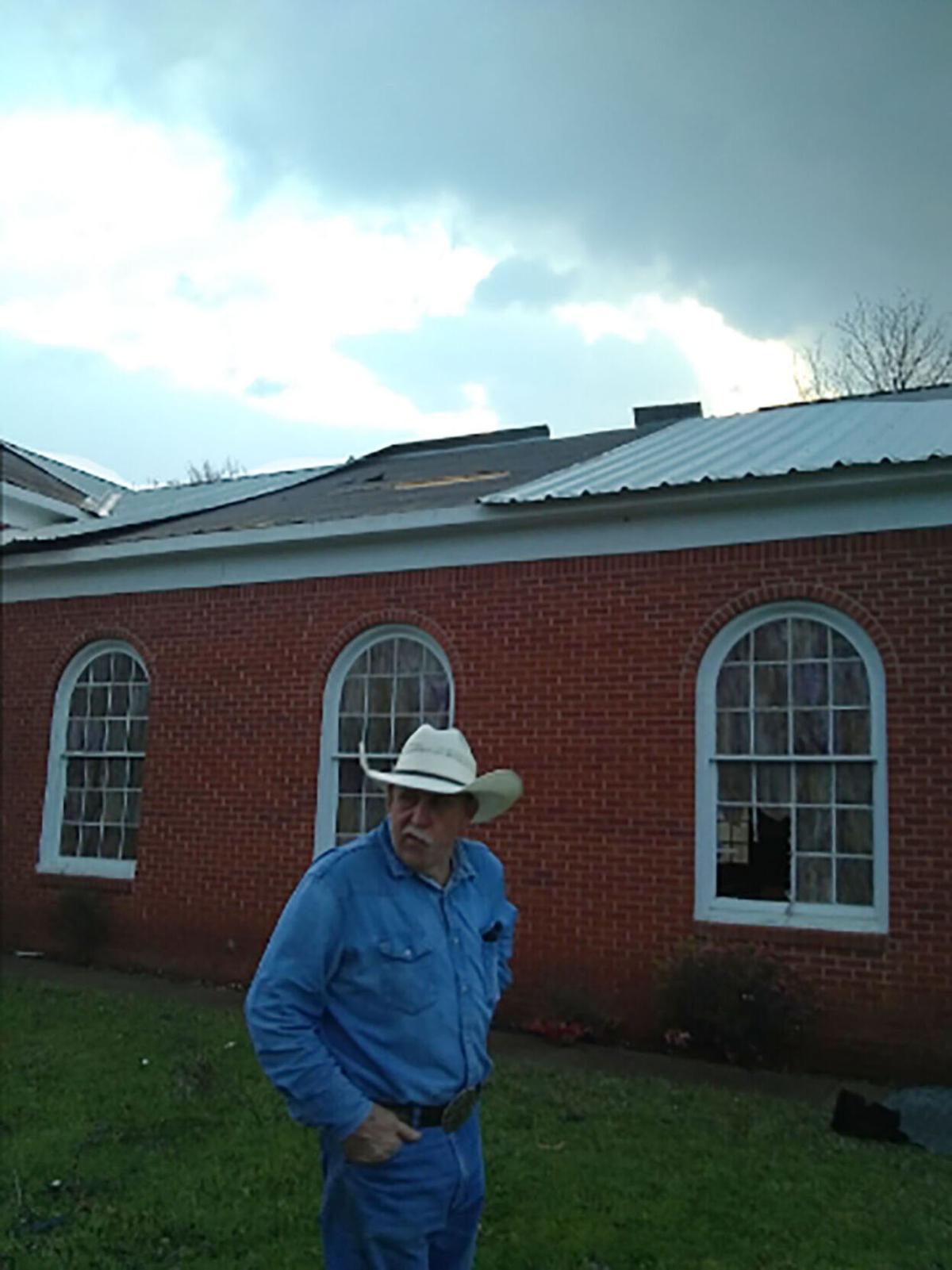 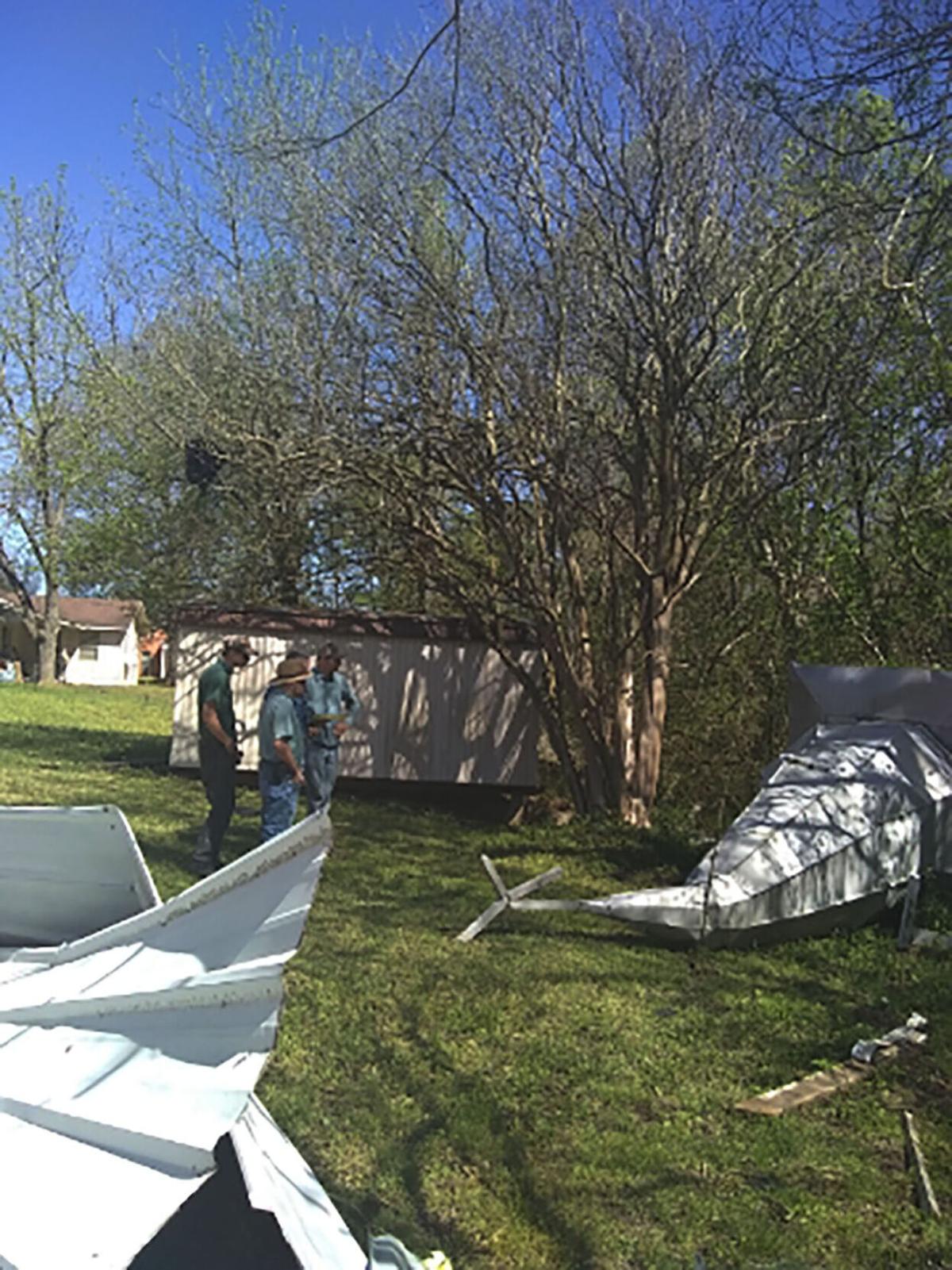 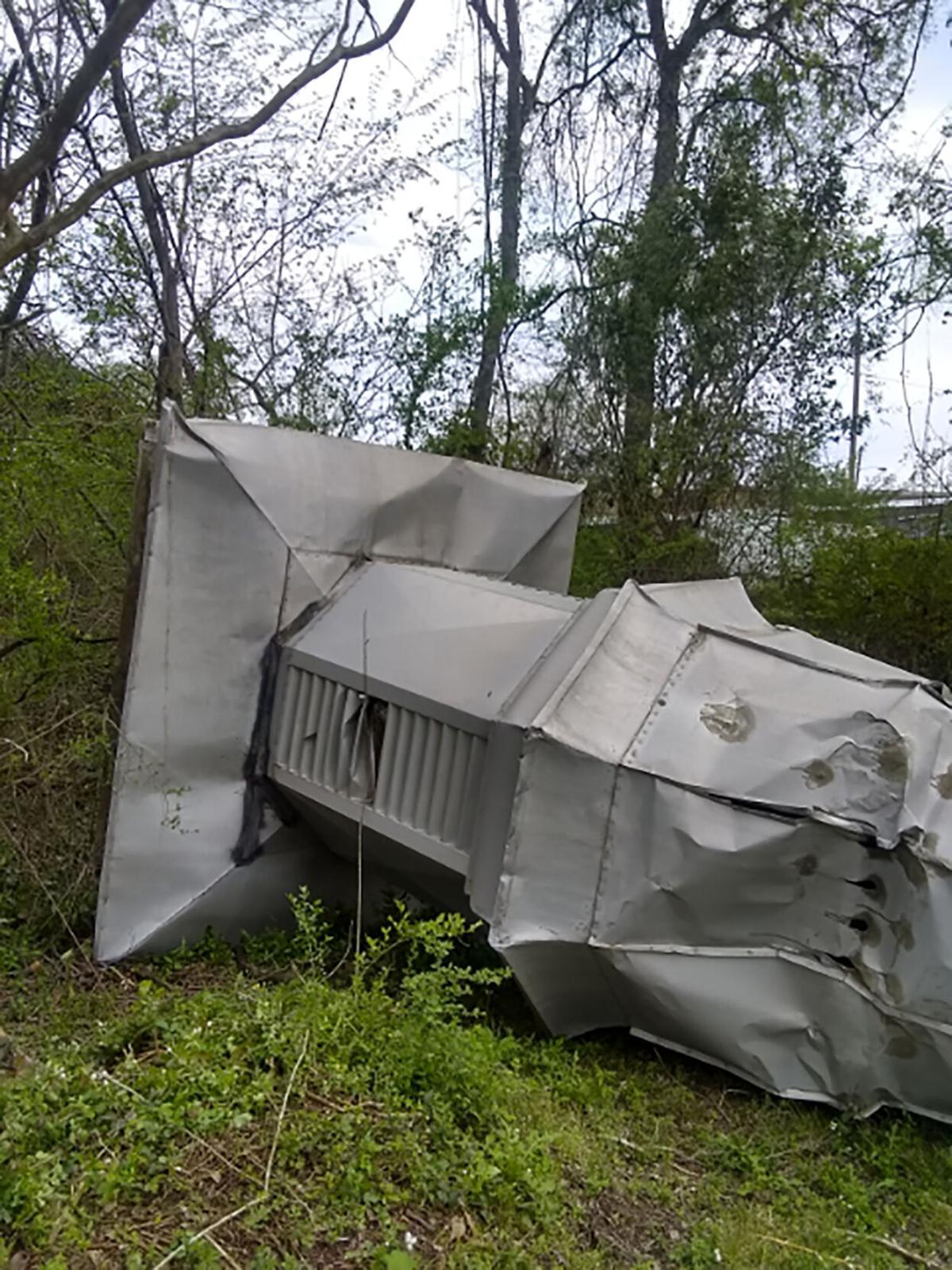 The church’s steeple was torn off and tossed to the ground beside the church. The bell tower at Mt. Enterprise FUMC collapsed during the tornado.

When help was needed after his Mt. Enterprise church was severely damaged by a tornado, Brother Billy Bledsoe said God provided it.

It came the very night the tornado hit.

“God sent us somebody to start putting tarp over this huge open place in this steeple where the bell tower collapsed, and then we started putting blue tarp on — it’s no easy task when the rain was coming back in on us,” Bledsoe said. “And then it starting getting dark and we don’t have electric. The Mt. Enterprise Volunteer Fire Department gave us portable lights to shine up there so we could do that. Some of the people did not even leave after 1 a.m. that Saturday night.”

Bledsoe and 15 other members of the First United Methodist Church in Mt. Enterprise were holding a Passover service on March 27 when a a line of storms and tornadoes swept through East Texas.

The group was in the church’s Family Life Center, across the street from the sanctuary, when a member of the Mt. Enterprise Volunteer Fire Department got an alert for a tornado coming down U.S. 84. It was headed straight for them.

“There’s a large pantry, and there were 16 of us that hunkered down in the pantry,” he said. “So big thunder boomed, just extremely loud, and the lights went out. I just started praying fervently.”

The darkness was complete, Bledsoe said, but they could feel and hear the tornado coming over them. Bledsoe and the firefighter made sure to count how many people they were with just in case the worst happened.

When it was over, Bledsoe said another member walked out of the pantry and looked out of the little windows on the center’s doors, saying “Well Brother Billy, we have a little work to do on the church.”

“The long and the short, I looked up and a lot of the metal roof was gone on the west side, and then we have a two-story in the back for Sunday School classes,” Bledsoe said. “It’s all one red-brick building... I looked and I was just numb.

“Jesus, where’s our steeple? It’s this tall steeple with a cross on top, and I didn’t see it.”

The tornado had come south and then straightened up west to east — and a porch at the church had gone the same way.

“You could literally see with the visible eye it moved all four columns west to east not quite an inch but almost an inch,” Bledsoe said. “And of course it moved the whole porch.”

The tornado also damaged the church’s double glass doors and toppled its bell tower. The actual bell, weighing about 1,000 pounds and original to the 1954 building, was on the ground inside the church. The church’s stained glass windows were, as Bledsoe describes it, physically shredded and strewn about the sanctuary.

Bledsoe didn’t find the steeple until he walked around the building.

“This tornado took this tall steeple and took it to the back of the church and the only reason it stopped is because a copse of trees and it uprooted the trees,” Bledsoe said.

Many of the church’s members have been there for 40 or 50 years, and Bledsoe said they can’t recall anything happening like this ever.

Bledsoe is a lay minister at both Mt. Enterprise FUMC and Concord United Methodist Church about seven minutes down the road. For now, while they wait for church repairs to be done, Concord is hosting both services at 11 a.m.

“I think it’s just interesting how people want to help, how people do help,” Bledsoe said.

Bledsoe’s spiritual advisor is Pastor Kevin Otto at First United Methodist Church in Carthage, and Otto has been helping Bledsoe respond to the storm. FUMC Carthage sent a team of volunteers to the church to help clean-up.

“They came down and we took each pew cushion and turned it over to get debris and shredded stained glass windows out one by one. And then we took all the hymnals, Bibles and everything behind the pews, shook them out and stored them in the pastor’s study,” Bledsoe said.

The church already has a contractor and is waiting on their insurance company to complete their claim. But Bledsoe says insurance won’t cover the entire cost of the rebuild, so they’ve started a fundraising effort.

There are two ways to donate:

A GoFundMe has been set up

“We really need the love offerings, the donations, because our insurance is not going to cover everything,” Bledsoe said.

Among all the destruction, Bledsoe says his congregation also sees hope. That Palm Sunday the day after the tornado hit, they still had services — though Bledsoe jokes they had to do it without the pianos and organs that Methodists love so much.

“There’s a refreshing among the people and people are drawing closer to each other as well as to our heavenly father,” he said. “The thing that I would add is we’re looking at it like God is bringing beauty from the ashes.”

Meredith Shamburger serves as the regional editor for Carthage and Kilgore. She has previously worked at the Longview News-Journal, the Marshall News Messenger and The Dallas Morning News. Meredith graduated from Southern Methodist University in 2011.