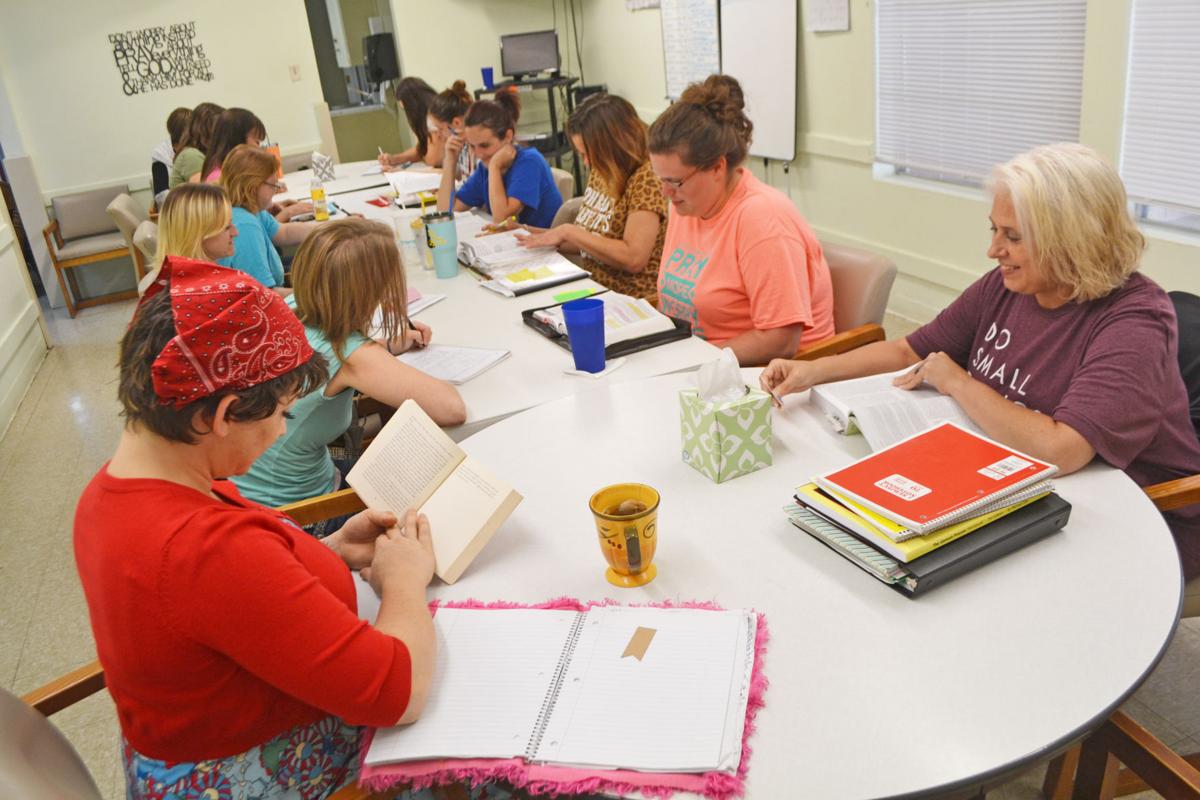 Decorative lighthouses throughout the Son Shine Lighthouse Ministry facility remind residents of the new light on their paths. 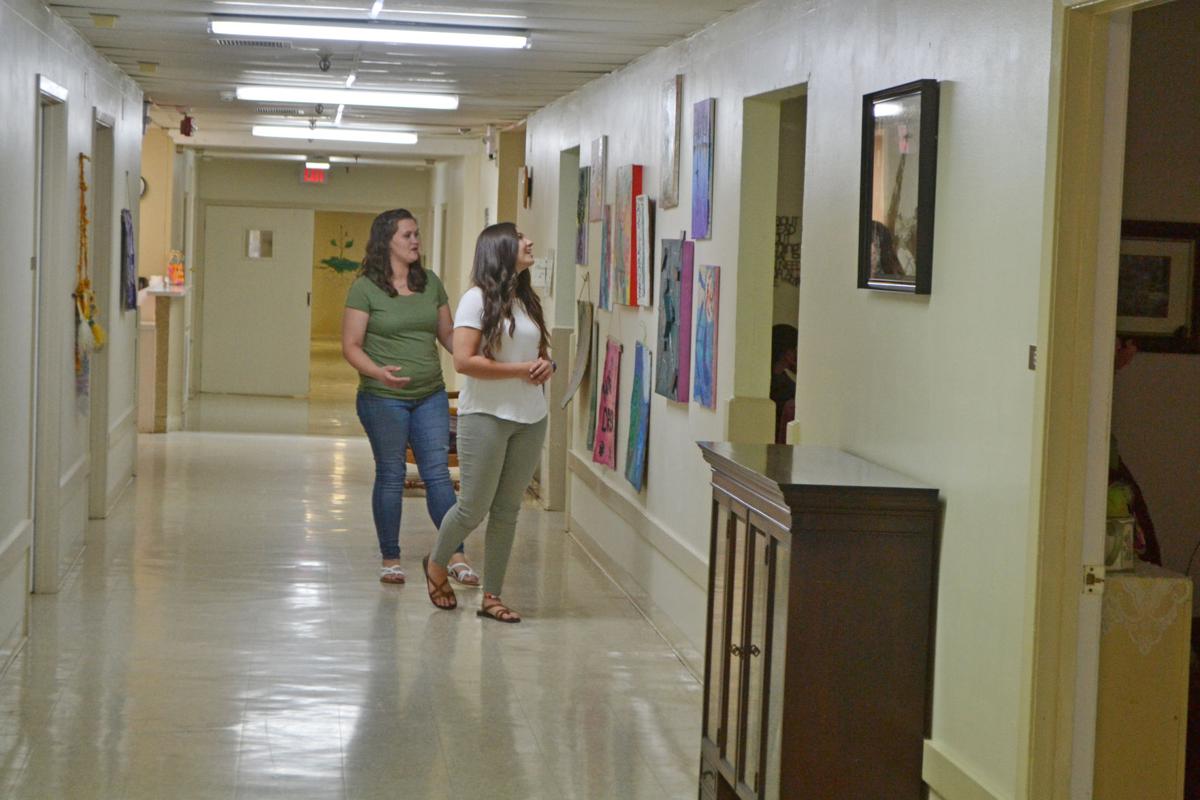 Jessica Dunnavant (left) and Serenity Jones lead a tour of the Son Shine Lighthouse facility. After completing their one-year program, the two grads are staying on for another year as they move forward in life. 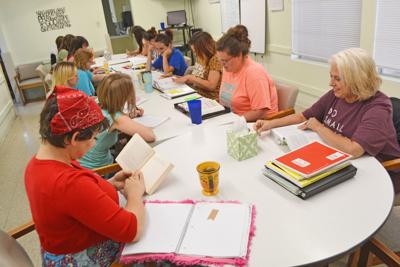 Decorative lighthouses throughout the Son Shine Lighthouse Ministry facility remind residents of the new light on their paths.

Jessica Dunnavant (left) and Serenity Jones lead a tour of the Son Shine Lighthouse facility. After completing their one-year program, the two grads are staying on for another year as they move forward in life.

A year ago, Jessica Dunnavant struggled to envision today, but she’s seen things happen the past year she’s never thought possible. It’s no leap forward, though: there were many, many steps in-between, guided by Son Shine Lighthouse Ministry.

Now, there are many more steps ahead, sure ones: “It’s given me a new outlook on life.”

Women come to the New London facility in crisis, escaping violence, addiction or a number of other issues that drag them down. In the converted nursing home, they find faith-based care and, when necessary, frank wisdom, sternness, whatever is needed to set a straight path.

“The women who work here really have a heart for this,” Dunnavant added, “even when it hurts, because sometimes it hurts to get better.

“I think that’s one of the hardest parts of this program: you have to look at yourself and accept that and own that.”

On Saturday, the 29-year-old joins Serenity Jones and Tera Mullins in their official graduation from the one-year program. It’s set for 4 p.m. at First Baptist Church of Kilgore as the ministry celebrates its sixth anniversary.

“We’ve had 38 graduate from the program,” she said, which is funded by donations from churches, individuals and grants. Any contribution helps transform lives: “They come in feeling very defeated and feeling they’ll never amount to anything.

“I see the end-product and the potential. That’s where we try to get their mind connected, to their ability through the Lord. Once they start believing in themselves and walking through recovery, the sky’s the limit.”

The ministry is focused on the personal, the practical, the potential in serving its clients.

“By the time they leave, they just have a whole new mindset. It’s very exciting to see them come in, to see where they were and to see the finished product. It’s exciting to watch that transformation.

According to Jones, the transitional home takes women as they are, whatever they’re facing.

“It’s obviously voluntary,” the 27-year-old added. Women call in for two weeks to get on the intake list, showing their initiative and desire to be a part of the program. Ultimately, “They bring us in for an interview.”

In mid-August, there were 13 women enrolled in the program with space for more. Residents have their own rooms, decorated by different women from the community. A tour through the facility stops first at the residents’ classroom space and leads on to their workout room, a space for family visits, a counseling area, library, dining room, kitchen, the prayer room, an art space and a children’s play area.

“Some women have their children or they get them back,” Dunnavant said.

According to Jones, “They’ve been separated from their children for one reason or another. It’s reunification.”

“We’ve had some ladies in their 50s,” Dunnavant said. “There is no typical age range.”

On a typical day, after waking up, straightening up and having breakfast, the residents gather by 8 a.m. for praise and worship until 9 a.m. followed by an hour-long Bible study. Chores follow (“We all pitch in and clean a different section of the house,” Jones said) or classes such as ‘Safe People,’ ‘Battlefield of the Mind,’ ‘Boundaries’ or another focus.

“It’s anything from a spiritual class to a practical life-application class,” Jones said, “maybe things we hadn’t learned along the way.”

It is life-changing, she agreed, and the facility’s guides invest their lives in making the residents’ lives better.

After lunch come more classes taught by volunteers or staff members then free time till 5 p.m. and dinner.

“Some nights we go to recovery meetings. Sometimes we have them here,” Jones added. Before homework and relaxing for the night, the women may attend different events in the area such as ‘Doing Life Together’ at Green Acres Baptist Church in Tyler, “Fellowshipping with other believers and just being involved with our community.”

Faith in Christ is the facility’s cornerstone, Dunnavant said, grateful for that eternal transformation in her life.

“I have a little history, but along my journey up until this point nobody had told me about Jesus.”

Since finishing the program, Mullins has put down new roots in Mt. Pleasant. It’s a stark difference from where she was a year back.

“In all honesty, I had been in drug addiction for a long time, on-and-off. I had a 2-year-old at the time, and CPS had taken her, due to my drug use,” she said. “At that point, I knew something had to change.”

An East Texas native from the Longview area, Mullins began her stint at the lighthouse ministry Aug. 3, 2018.

With the year behind her, staffers helped Mullins find a new program, one for single mothers, out on their own – but not quite.

“You have to be enrolled in college full-time and work full-time. They help you get out on your own, but slowly, so you’re not just thrown back out there,” she said. College starts next week, focusing on medical billing and coding. Life is still changing, in the best ways – the 32-year-old has been reunited with her child, and she credits Son Shine for the progress. “They helped me deal with my root problems and learn things, honestly, I should have learned as a child but I didn’t.

“I would tell anyone, go to Son Shine. It’s a hard program. It’s not easy by any means. It’s very difficult at times. It’s a struggle,  but it’s worth it.”

“It’s an extension of our stay here,” Jones said. “It helps you build your foundation on Jesus. It’s the practical side as well as the spiritual side,” extended for a year, two or more, depending on the individual.

Classes at Kilgore College start Tuesday for both Dunnavant and Jones.

“I’m not from this area,” Dunnavant said, “so starting my life over in this area is so important.”

“And having this support system,” Jones added. “That’s an unexpected by-product of this program, too. You’re not just thrown out there in the world like a minnow in a shark tank.”