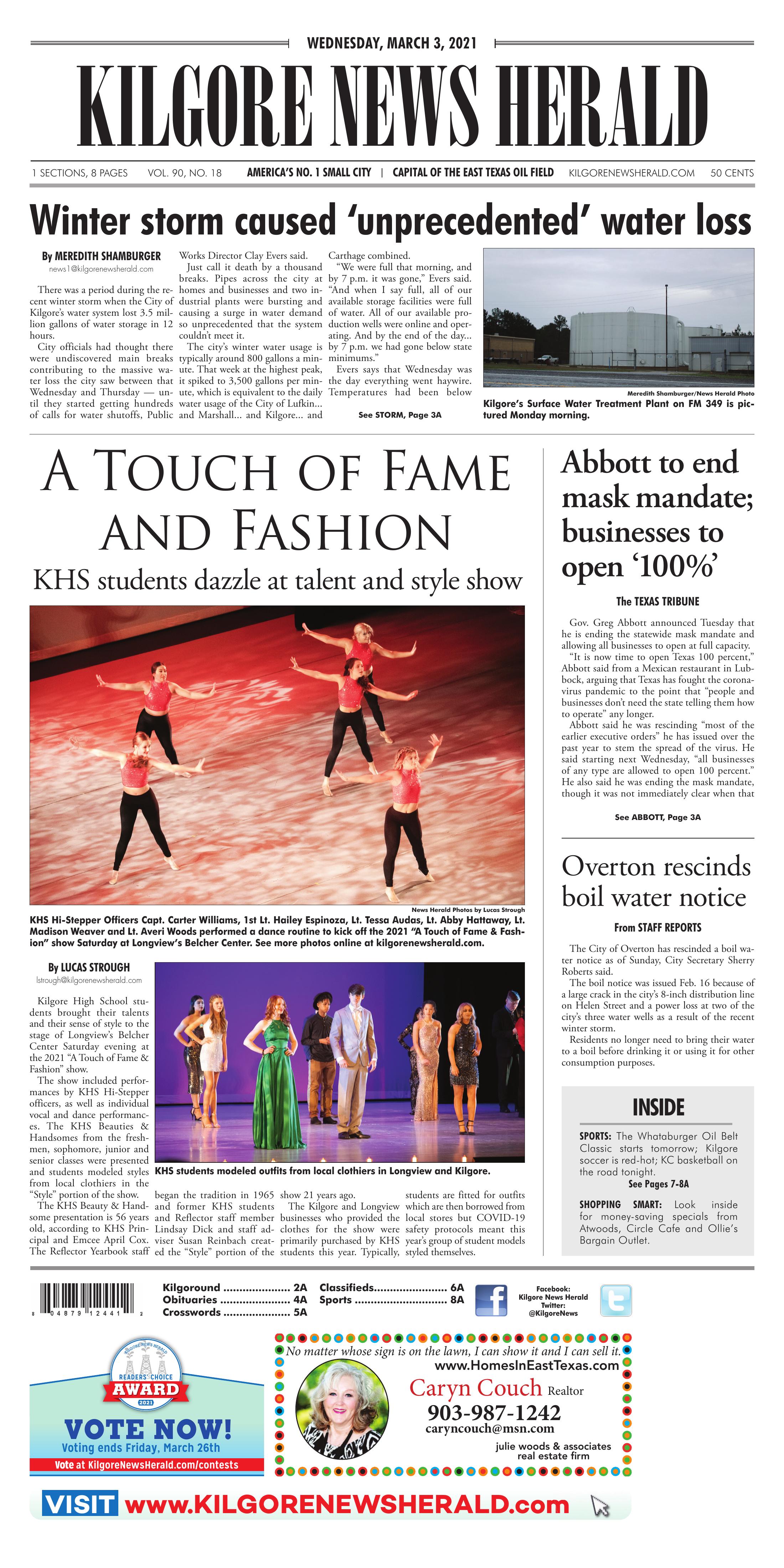 There was a period during the recent winter storm when the City of Kilgore’s water system lost 3.5 million gallons of water storage in 12 hours.

City officials had thought there were undiscovered main breaks contributing to the massive water loss the city saw between that Wednesday and Thursday — until they started getting hundreds of calls for water shutoffs, Public Works Director Clay Evers said.

Just call it death by a thousand breaks. Pipes across the city at homes and businesses and two industrial plants were bursting and causing a surge in water demand so unprecedented that the system couldn’t meet it.

The city’s winter water usage is typically around 800 gallons a minute. That week at the highest peak, it spiked to 3,500 gallons per minute, which is equivalent to the daily water usage of the City of Lufkin... and Marshall... and Kilgore... and Carthage combined.

Evers said two of industrial facilities in the city had large breaks in addition to the many residential and business breaks. Between seven and 10 city employees went out throughout the city to help shut off water, while roads were still hazardous.

“It was just constant shutoffs even though the night,” Evers said. “We had dispatch, we were finding homes also that were vacant, for sale, businesses that hadn’t gone and checked their water for the whole week that had experienced breaks.”

As connections were turned off, Evers said it was apparent that there was no big main break. It was all the little breaks adding up.

“The sheer number of personal water main/water system breaks inside their homes and inside businesses: you add all of those up, and that is an enormous amount of water that far exceeded our storage capacity and our ability to meet that demand,” Evers said. “We saw demands well in excess of four, five, six, seven times our highest peak demands.”

The city still doesn’t have an exact number of water breaks, Evers said, because often while responding to one call, employees would see other breaks and shut off more water connections. The city is reconstructing that number as they get calls to turn water back on.

The city itself had 11 water main breaks between Feb. 17 and Feb. 23, when the boil notice was rescinded, most of them 2-inch lines and a handful of larger lines. One of the water system’s wells also had a frozen valve, which prevented it from coming on as demand increased; city officials had to build fires underneath the valve to break it lose.

The city also brought its water treatment plant online, which draws surface water from the Sabine River, to help replenish its empty wells. Normally the plant is not in operation in winter because the demand is not there.

“All in all, what our experience was in that particular moment over those few days was that our demand, our water loss far exceeded our storage supplies and production capacity that was available to us at that time,” Evers said. “Given the sheer number of water shutoffs, all signs point to that it was series — just a volume of people’s pipes freezing and thawing loose.

“The volume of water loss was just unprecedented in my 20-year career. I’ve never seen anything like that,” Evers said.

Rylee Moore performs a dance solo at the 2021 “A Touch of Fame & Fashion Show” at Longview’s Belcher Center.

KHS students modeled outfits from local dress and suit shops at during the style portion of the show.

KHS students modeled formal and casual designs from shops in Kilgore and Longview, including Everything that Blings, Calamity Jane’s, Stage and others.

Layla Spalding sings “Rescue” by Lauren Daigle at the 2021 A Touch of Fame & Fashion Show.

Kilgore High School students brought their talents and their sense of style to the stage of Longview’s Belcher Center Saturday evening at the 2021 “A Touch of Fame & Fashion” show.

The show included performances by KHS Hi-Stepper officers, as well as individual vocal and dance performances. The KHS Beauties & Handsomes from the freshmen, sophomore, junior and senior classes were presented and students modeled styles from local clothiers in the “Style” portion of the show.

The KHS Beauty & Handsome presentation is 56 years old, according to KHS Principal and Emcee April Cox. The Reflector Yearbook staff began the tradition in 1965 and former KHS students and Reflector staff member Lindsay Dick and staff adviser Susan Reinbach created the “Style” portion of the show 21 years ago.

The Kilgore and Longview businesses who provided the clothes for the show were primarily purchased by KHS students this year. Typically, students are fitted for outfits which are then borrowed from local stores but COVID-19 safety protocols meant this year’s group of student models styled themselves.

Gov. Greg Abbott in September meets with leaders in El Paso to discuss the coronavirus situation in the city and state.

Gov. Greg Abbott announced Tuesday that he is ending the statewide mask mandate and allowing all businesses to open at full capacity.

“It is now time to open Texas 100 percent,” Abbott said from a Mexican restaurant in Lubbock, arguing that Texas has fought the coronavirus pandemic to the point that “people and businesses don’t need the state telling them how to operate” any longer.

Abbott said he was rescinding “most of the earlier executive orders” he has issued over the past year to stem the spread of the virus. He said starting next Wednesday, “all businesses of any type are allowed to open 100 percent.” He also said he was ending the mask mandate, though it was not immediately clear when that would go into effect. Abbott first instituted the mask requirement last summer.

The news is not entirely unexpected. Abbott said Thursday that his office was looking at when it could lift all statewide coronavirus orders and that he would have announcements “pretty soon.” But it comes as the spread of the virus remains serious across the state.

The current trajectory of the virus has been difficult to measure in recent days due last month’s winter storm, which forced many large counties to close their testing centers and not report any cases. Daily confirmed cases and deaths are clearly down compared to a statewide peak in January. Hospitalization data has been less disrupted, though, and has shown a consistent decline since late January.

Still, 59 new deaths were reported on March 1. And only 6.5 percent of Texans had been fully vaccinated as of Sunday, though Abbott has been optimistic that the pace will pick up as more vaccines are made available to Texas.

Experts say Texas is a long way from reaching herd immunity. Hitting the 70 percent to 80 percent level that many estimate is needed would mean vaccinating some 22 million people, or nearly 100 percent of adults in the state, according to census numbers. The vaccines are currently not approved for children under 16, who make up about 23 percent of the population.

Scientists do not yet know for sure whether or how well the vaccines prevent the spread of the virus, though some preliminary research has suggested that some vaccines might be able to do so to some extent.

The Centers for Disease Control recommends that people who have received two doses of the vaccine continue to avoid crowds, stay at least 6 feet away from people who live outside their households, and wear masks to cover their nose and mouth.

Dr. Anthony Fauci, the nation’s top infectious-disease doctor, has repeatedly said that he does not know when Americans will be able to return to normal, but that they may still need to continue wearing face masks into 2022.

The City of Overton has rescinded a boil water notice as of Sunday, City Secretary Sherry Roberts said.

The boil notice was issued Feb. 16 because of a large crack in the city’s 8-inch distribution line on Helen Street and a power loss at two of the city’s three water wells as a result of the recent winter storm.

Residents no longer need to bring their water to a boil before drinking it or using it for other consumption purposes.