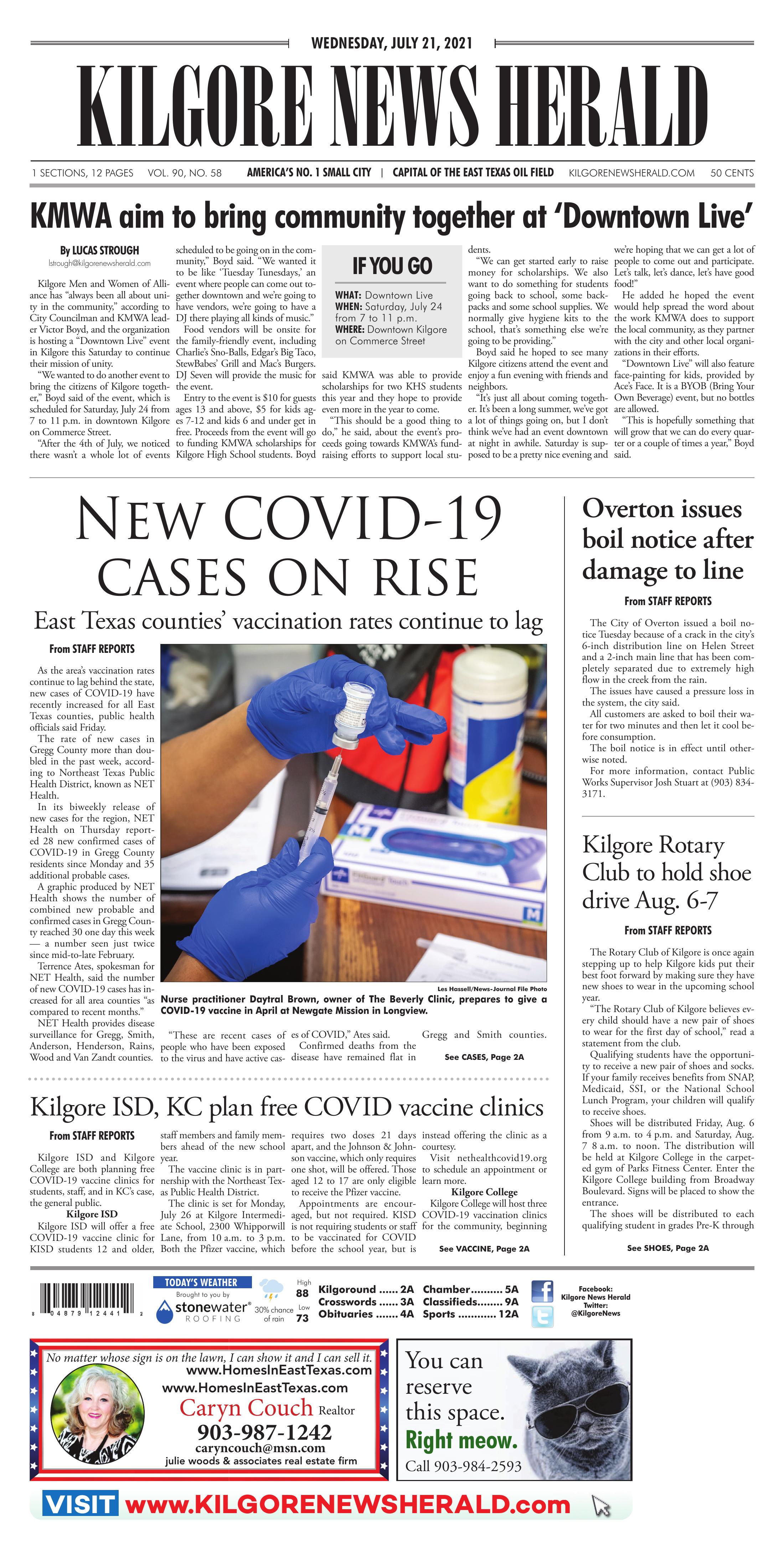 Kilgore Men and Women of Alliance are planning a “Downtown Live” event in downtown Kilgore Saturday, July 24, from 7 to 11 p.m. The event will feature face painting for kids, local food vendors and a DJ will be on hand to provide music.

Kilgore Men and Women of Alliance has “always been all about unity in the community,” according to City Councilman and KMWA leader Victor Boyd, and the organization is hosting a “Downtown Live” event in Kilgore this Saturday to continue their mission of unity.

“We wanted to do another event to bring the citizens of Kilgore together,” Boyd said of the event, which is scheduled for Saturday, July 24 from 7 to 11 p.m. in downtown Kilgore on Commerce Street.

“After the 4th of July, we noticed there wasn’t a whole lot of events scheduled to be going on in the community,” Boyd said. “We wanted it to be like ‘Tuesday Tunesdays,’ an event where people can come out together downtown and we’re going to have vendors, we’re going to have a DJ there playing all kinds of music.”

Food vendors will be onsite for the family-friendly event, including Charlie’s Sno-Balls, Edgar’s Big Taco, StewBabes’ Grill and Mac’s Burgers. DJ Seven will provide the music for the event.

Entry to the event is $10 for guests ages 13 and above, $5 for kids ages 7-12 and kids 6 and under get in free. Proceeds from the event will go to funding KMWA scholarships for Kilgore High School students. Boyd said KMWA was able to provide scholarships for two KHS students this year and they hope to provide even more in the year to come.

“This should be a good thing to do,” he said, about the event’s proceeds going towards KMWA’s fundraising efforts to support local students.

“We can get started early to raise money for scholarships. We also want to do something for students going back to school, some backpacks and some school supplies. We normally give hygiene kits to the school, that’s something else we’re going to be providing.”

Boyd said he hoped to see many Kilgore citizens attend the event and enjoy a fun evening with friends and neighbors.

“It’s just all about coming together. It’s been a long summer, we’ve got a lot of things going on, but I don’t think we’ve had an event downtown at night in awhile. Saturday is supposed to be a pretty nice evening and we’re hoping that we can get a lot of people to come out and participate. Let’s talk, let’s dance, let’s have good food!”

He added he hoped the event would help spread the word about the work KMWA does to support the local community, as they partner with the city and other local organizations in their efforts.

“Downtown Live” will also feature face-painting for kids, provided by Ace’s Face. It is a BYOB (Bring Your Own Beverage) event, but no bottles are allowed.

“This is hopefully something that will grow that we can do every quarter or a couple of times a year,” Boyd said.

Where: Downtown Kilgore on Commerce Street.

As the area’s vaccination rates continue to lag behind the state, new cases of COVID-19 have recently increased for all East Texas counties, public health officials said Friday.

The rate of new cases in Gregg County more than doubled in the past week, according to Northeast Texas Public Health District, known as NET Health.

In its biweekly release of new cases for the region, NET Health on Thursday reported 28 new confirmed cases of COVID-19 in Gregg County residents since Monday and 35 additional probable cases.

A graphic produced by NET Health shows the number of combined new probable and confirmed cases in Gregg County reached 30 one day this week — a number seen just twice since mid-to-late February.

Terrence Ates, spokesman for NET Health, said the number of new COVID-19 cases has increased for all area counties “as compared to recent months.”

“These are recent cases of people who have been exposed to the virus and have active cases of COVID,” Ates said.

Confirmed deaths from the disease have remained flat in Gregg and Smith counties. NET Health on Thursday reported 111 total confirmed deaths in Gregg County since the start of the pandemic and 211 in Smith.

Data from NET Health also shows seven-day rolling rates of new infections have increased in all of the seven counties served by NET Health with the rate more than doubling for Gregg County.

A graphic showing the metric for July 9 to Thursday shows a rate of 10.72 new confirmed cases in Gregg County compared with 4.5 the previous week.

The seven-day rolling rate is the average number of all positive cases from the previous seven days divided by the population of the county and then multiplied by 100,000.

According to NET Health, moderate community spread consists of between 10 and 35 new weekly cases per 100,000 residents and shows “sustained transmission with confirmed exposure within congregate settings and potential for rapid increase in cases.”

It is unknown if the recent numbers include cases caused by the Delta variant of COVID-19, which is considered to be more easily spread than the original virus.

Ates said recently that the district’s epidemiologists also have not received any confirmation of COVID-19 cases as being “specifically tested and confirmed as the Delta variant.”

However, the state also recently said the data is more likely an issue of gathering information about and reporting patients as having the variant. Also, most COVID-19 cases are not studied to determine if they were caused by the variant.

Meanwhile, Gregg and other area counties are far behind the state in COVID-19 vaccination rates.

The state on Friday reported just more than 59 percent of the state’s population of residents 12 and older have been fully vaccinated.

No area county is close to the state rate, with the highest being Smith at 38.68 percent of residents 12 and older being fully vaccinated. Gregg County trails slightly at 37.9 percent.

And the more rural the county, the fewer number of residents vaccinated.

Harrison, Rusk and Upshur counties show vaccination rates at 30.93 percent, 29.85 percent and 27 percent, respectively. Just more than 15 percent of residents age 12 and older in Panola County, which has the smallest population in the area, are fully vaccinated.

Christus Good Shepherd Medical Center in June shut down its weekly mass COVID-19 vaccine hub at the Longview Exhibit Center and transitioned to offering shots on weekdays at its clinics as the demand at the hub slowed to a trickle.

Christus Health continues to schedule vaccines through its website at vaccinate.christushealth.org. NET Health offers vaccines at its clinic on North Broadway Avenue by appointment. To make an appointment, visit NETHealthCOVID19.org.

Kilgore ISD and Kilgore College are both planning free COVID-19 vaccine clinics for students, staff, and in KC’s case, the general public.

Kilgore ISD will offer a free COVID-19 vaccine clinic for KISD students 12 and older, staff members and family members ahead of the new school year.

The vaccine clinic is in partnership with the Northeast Texas Public Health District.

Appointments are encouraged, but not required. KISD is not requiring students or staff to be vaccinated for COVID before the school year, but is instead offering the clinic as a courtesy.

Visit nethealthcovid19.org to schedule an appointment or learn more.

The other dates for the vaccine clinics are Monday, Aug. 9; Tuesday, Aug. 31; and Tuesday, Sept. 21. Appointments are recommended, but walk-ins will also be accepted.

“We are pleased to have the opportunity to partner with the Northeast Texas Public Health District to provide services designed to foster the health and safety of the college and our community,” Kilgore College President Brenda Kays said.

Both vaccines will be offered to people over 18 years of age. Those ages 12 to 17 are only eligible for the Pfizer vaccine, and they must be accompanied by a parent or legal guardian.

Face coverings are required inside the vaccination clinic.

Times can be scheduled by visiting www.NETHealthCOVID19.org using the specific portal, or by calling (903) 617-6404.

Those who have received another vaccination of any kind, including flu or Shingles, or who have recently tested positive for COVID-19, need to wait at least 14 days before receiving the first (or a second) COVID-19 vaccine.

The City of Overton issued a boil notice Tuesday because of a crack in the city’s 6-inch distribution line on Helen Street and a 2-inch main line that has been completely separated due to extremely high flow in the creek from the rain.

The issues have caused a pressure loss in the system, the city said.

All customers are asked to boil their water for two minutes and then let it cool before consumption.

The boil notice is in effect until otherwise noted.

Kilgore Rotarians measure KISD students for shoes at their 2019 Shoe Drive. Their 2021 Shoe Drive is coming soon. If your family receives benefits from SNAP, Medicaid, SSI, or the National School Lunch Program, your children will qualify to receive shoes. Shoes will be distributed Friday, Aug. 6 from 9 a.m. to 4 p.m. and Saturday, Aug. 7 from 8 a.m. to noon. The distribution will be held at Kilgore College in the carpeted gym of Parks Fitness. Center.

The Rotary Club of Kilgore is once again stepping up to help Kilgore kids put their best foot forward by making sure they have new shoes to wear in the upcoming school year.

“The Rotary Club of Kilgore believes every child should have a new pair of shoes to wear for the first day of school,” read a statement from the club.

Qualifying students have the opportunity to receive a new pair of shoes and socks. If your family receives benefits from SNAP, Medicaid, SSI, or the National School Lunch Program, your children will qualify to receive shoes.

Shoes will be distributed Friday, Aug. 6 from 9 a.m. to 4 p.m. and Saturday, Aug. 7 8 a.m. to noon. The distribution will be held at Kilgore College in the carpeted gym of Parks Fitness Center. Enter the Kilgore College building from Broadway Boulevard. Signs will be placed to show the entrance.

The shoes will be distributed to each qualifying student in grades Pre-K through 12th grade. Each child needing shoes should be present for measuring to ensure correct size.

Park in the Kilgore College parking lot directly in front of the Christ the King Catholic Church. There will be signs designating where to park.

Only one adult/parent will be allowed to accompany children from the same family group. Face masks are not required at this time. However, if the health conditions in our area change, then face masks may be required. Once inside the building, strict social distancing must be observed. Additional safety protocols, including hand sanitizer and disinfectant wipes, will be employed.

The annual Rotary shoe drive has become a much-appreciated event here in Kilgore, with as many as 500 pairs of shoes being given away at drives in previous years.