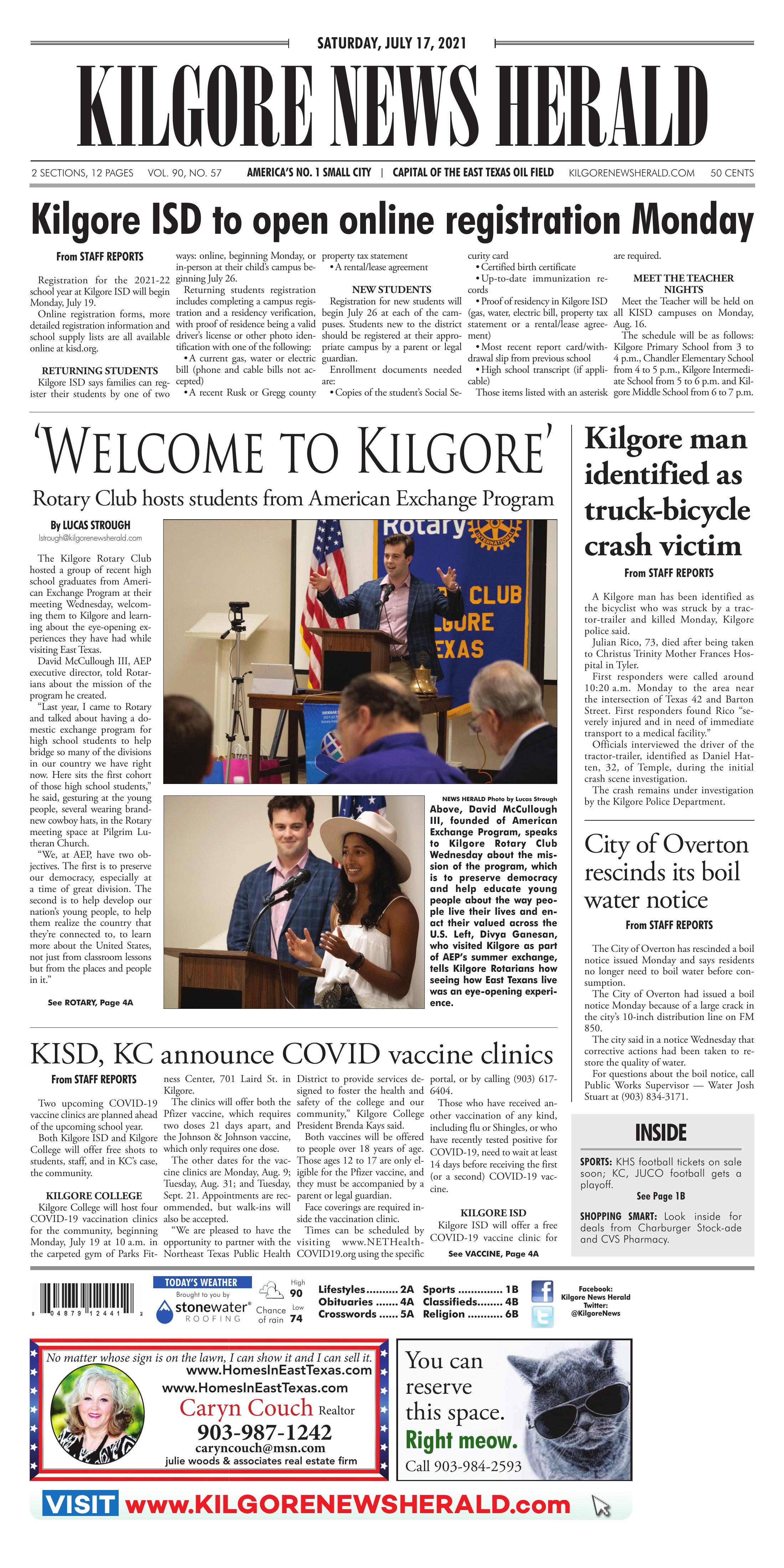 Registration for the 2021-22 school year at Kilgore ISD will begin Monday, July 19.

Kilgore ISD says families can register their students by one of two ways: online, beginning Monday, or in-person at their child’s campus beginning July 26.

Returning students registration includes completing a campus registration and a residency verification, with proof of residence being a valid driver’s license or other photo identification with one of the following:

Registration for new students will begin July 26 at each of the campuses. Students new to the district should be registered at their appropriate campus by a parent or legal guardian.

Those items listed with an asterisk are required.

Meet the Teacher will be held on all KISD campuses on Monday, Aug. 16.

Above, David McCullough III, founded of American Exchange Program, speaks to Kilgore Rotary Club Wednesday about the mission of the program, which is to preserve democracy and help educate young people about the way people live their lives and enact their valued across the U.S. Left, Divya Ganesan, who visited Kilgore as part of AEP’s summer exchange, tells Kilgore Rotarians how seeing how East Texans live was an eye-opening experience.

Veronika Lin, one of the recent high school graduates who visited Kilgore of part of AEP's summer exchange, tells Kilgore Rotarians about the things she learned on the trip, including how people from different areas of the U.S. can share similar values.

Kilgore Rotarians chat with students from the AEP's summer exchange. Students tried on cowboy boots and hats, fired a gun for the first time and visited local church services as part of their trip.

Matthew Murray, who recently graduated from Stamford High School in Stamford, Connecticut, said many of the things he assumed about life in Kilgore and the folks who live here were upended in the course of the trip.

Kilgore Mayor Ronnie Spradlin shows off a "Kilgore Proud" t-shirt to students who visited Kilgore as part of AEP's summer exchange. The shirt was one of many items in a gift bag given to each visiting student and the mayor also read a proclamation deeming "American Exchange Program Day" in Kilgore.

The Kilgore Rotary Club hosted a group of recent high school graduates from American Exchange Program at their meeting Wednesday, welcoming them to Kilgore and learning about the eye-opening experiences they have had while visiting East Texas.

David McCullough III, AEP executive director, told Rotarians about the mission of the program he created.

“Last year, I came to Rotary and talked about having a domestic exchange program for high school students to help bridge so many of the divisions in our country we have right now. Here sits the first cohort of those high school students,” he said, gesturing at the young people, several wearing brand-new cowboy hats, in the Rotary meeting space at Pilgrim Lutheran Church.

“We, at AEP, have two objectives. The first is to preserve our democracy, especially at a time of great division. The second is to help develop our nation’s young people, to help them realize the country that they’re connected to, to learn more about the United States, not just from classroom lessons but from the places and people in it.”

According to AEP’s website, McCullough was first inspired to found the exchange program after making a trip of his own to different locations across the country.

“In the summer of 2016, David McCullough III traveled from his family home in a suburb of Boston to study the impact of poverty on education in three communities in Texas, South Dakota, and Ohio. He spent two months on the road, speaking to hundreds of people. When he asked what is the greatest issue facing children in their communities, many said, ‘Our kids are growing up in bubbles, and they don’t have an opportunity to get out, to learn, and to grow.’”

A few years after his trip, McCullough’s students asked him about his experience traveling and expressed an interest in how they could do the same, by traveling the country and meeting folks from towns and cities far away and far different from their own.

This interest led him to found AEP and, on Wednesday, a group of the first students to take part in the program told Kilgore Rotarians what they had learned and how they felt after experiencing life in Kilgore.

This summer’s exchange was also led by Pastor Glenn Young of Kilgore’s First Baptist Church. Young has been a supporter of AEP’s mission since the organization’s founding in 2019.

Many of the young people visiting East Texas as part of the AEP program came from parts of the U.S. vastly different from Kilgore, in terms of attitudes about God, guns, politics and much more.

Matthew Murray, who recently graduated from Stamford High School in Stamford, Connecticut, said many of the things he assumed about life in Kilgore and the folks who live here were upended in the course of the trip.

“Coming to East Texas and specifically Kilgore, I had a lot of assumptions about how people would be, what I would see there, etc.,” Murray said.

“Meeting the people here and talking to them has been really taking those expectations and throwing them in the trash bin. The people here are so nice and so kind, so loving. They allowed us into their homes, onto their property, just so we can see how they live their lives. Things aren’t so cut and dried. For example, I know that the gun culture here is much bigger than it might be in Connecticut. We talked yesterday about how people in Texas see it differently. What I might have assumed would be a weapon of destruction, to others it might represent family or going on a hunting trip.”

Divya Ganesan, who recently graduated from Castilleja High School in Palo Alto, California, said she was thrilled to visit Kilgore and Kilgore Rotary Club. Her father, she said, earned a scholarship from Rotary International at the age of 17, allowing him to come from India to California, where he finished his final year of high school.

“I am so, so grateful for the generosity and the way that Kilgore has included us in your community. It showed us what you’re about,” she said. Along with her fellow AEP exchange students, Ganesan visited Cavender’s in Longview to try on cowboy boots and hats, fired a gun for the first time and learned about the ways Kilgoreites live, learn and worship.

Veronika Lin, a recent graduate of Milton Academy in Milton, Massachusetts, said she learned people from opposite sides of the country have more in common than they may realize, despite their differences.

“I’ve learned about similarities we have in terms of values,” she said.

“Where I come from, religion is not a center of community, but I see the same values of community and finding purpose and morality here. I’m very grateful for the attitudes we found here, that we had very open conversations.”

“This trip has allowed me to gain perspective that I couldn’t have if I didn’t come here. This experience has been all about seeing different places and seeing different things. For instance, I went to my very first church service with Pastor Glenn. It was a really enlightening experience for me. It has allowed me to see how different people live, even though we live in the same country, we’re really very different.”

Jake Merritt, Veronika Lin, Divya Ganesan, and Matthew Murray visited Kilgore as part of the AEP summer trip and now four students from Kilgore High School will spend one week of their summer exploring, learning and building personal and professional connections in other AEP towns.

Shelby Maring, who recently graduated from KHS, is leaving for Palo Alto today for her part in the program.

“I’m really excited. Coming from a small town, I’m a little bit jealous of the way y’all may live,” she said. “But seeing you come here and seeing what you guys are comparing to how we live daily, it’s made me more grateful for the small town feeling. It made me want to be more involved in a smaller community.”

McCullough summed up the goals of AEP succinctly: “We need to understand each other. It’s stuff like this that makes better tomorrows.”

Students pay no fees to participate in the program. To learn more about AEP and how students can participate, visit www.americanexchangeproject.org.

Two upcoming COVID-19 vaccine clinics are planned ahead of the upcoming school year.

Both Kilgore ISD and Kilgore College will offer free shots to students, staff, and in KC’s case, the community.

The other dates for the vaccine clinics are Monday, Aug. 9; Tuesday, Aug. 31; and Tuesday, Sept. 21. Appointments are recommended, but walk-ins will also be accepted.

“We are pleased to have the opportunity to partner with the Northeast Texas Public Health District to provide services designed to foster the health and safety of the college and our community,” Kilgore College President Brenda Kays said.

Both vaccines will be offered to people over 18 years of age. Those ages 12 to 17 are only eligible for the Pfizer vaccine, and they must be accompanied by a parent or legal guardian.

Face coverings are required inside the vaccination clinic.

Times can be scheduled by visiting www.NETHealthCOVID19.org using the specific portal, or by calling (903) 617-6404.

Those who have received another vaccination of any kind, including flu or Shingles, or who have recently tested positive for COVID-19, need to wait at least 14 days before receiving the first (or a second) COVID-19 vaccine.

Kilgore ISD will offer a free COVID-19 vaccine clinic for KISD students 12 and older, staff members and family members ahead of the new school year.

The vaccine clinic is in partnership with the Northeast Texas Public Health District.

Appointments are encouraged, but not required. KISD is not requiring students or staff to be vaccinated for COVID before the school year, but is instead offering the clinic as a courtesy.

Visit nethealthcovid19.org to schedule an appointment or learn more.

A Kilgore man has been identified as the bicyclist who was struck by a tractor-trailer and killed Monday, Kilgore police said.

First responders were called around 10:20 a.m. Monday to the area near the intersection of Texas 42 and Barton Street. First responders found Rico “severely injured and in need of immediate transport to a medical facility.”

Officials interviewed the driver of the tractor-trailer, identified as Daniel Hatten, 32, of Temple, during the initial crash scene investigation.

The crash remains under investigation by the Kilgore Police Department.

The City of Overton has rescinded a boil notice issued Monday and says residents no longer need to boil water before consumption.

The City of Overton had issued a boil notice Monday because of a large crack in the city’s 10-inch distribution line on FM 850.

The city said in a notice Wednesday that corrective actions had been taken to restore the quality of water.

Click and hold your mouse button on the page to select the area you wish to save or print. You can click and drag the clipping box to move it or click and drag in the bottom right corner to resize it. When you're happy with your selection, click the checkmark icon next to the clipping area to continue.