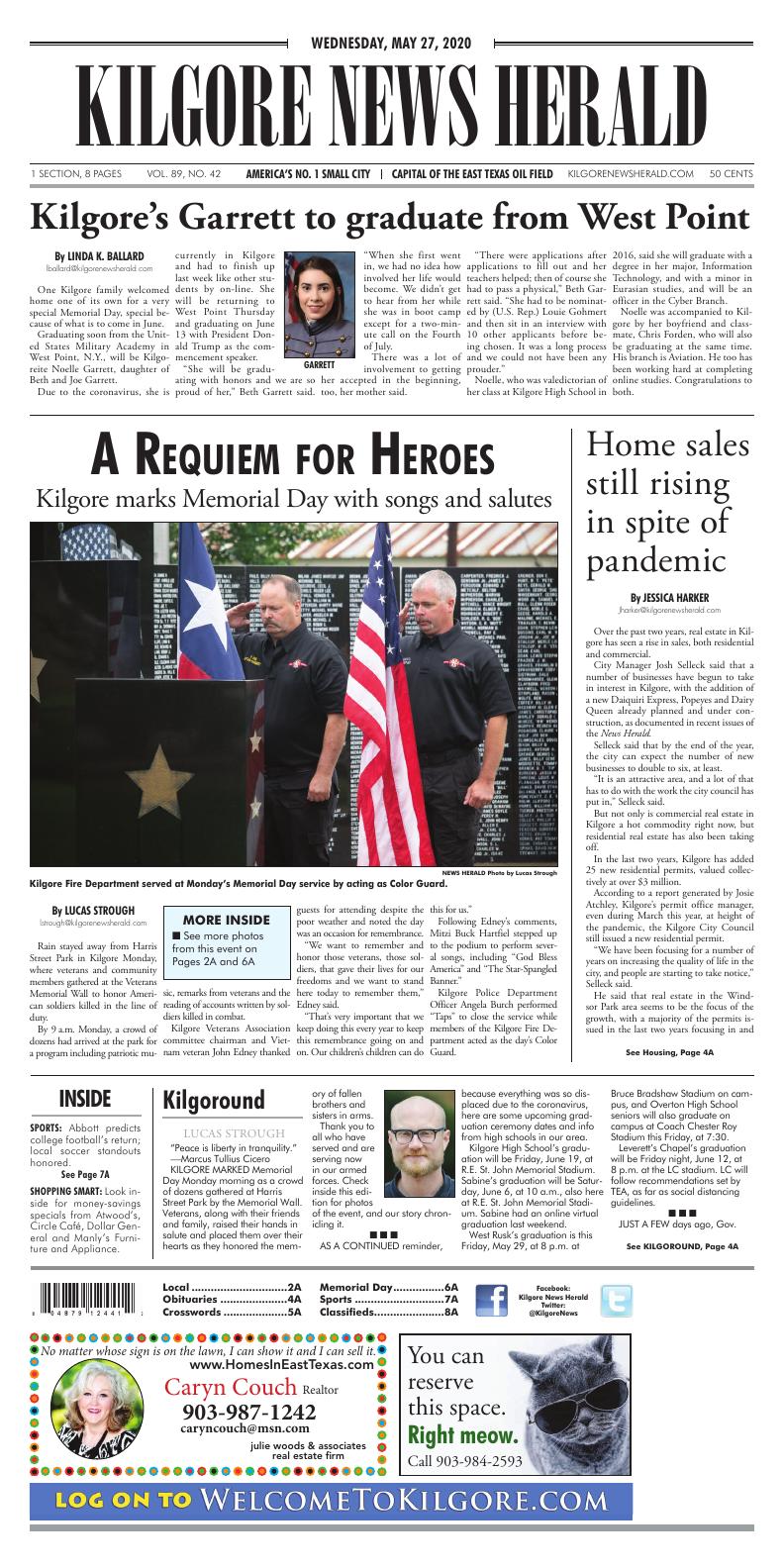 Kilgore’s own Noelle Garrett (above) will graduate in a couple of weeks from the U.S. Military Academy in West Point, N.Y. (Photo courtesy of GARRETT FAMILY)

Noelle Garrett (left), a former Kilgore High School valedictorian in 2016, told her graduating class in her address then that she planned to graduate West Point. Garrett will do just that in June. (Photo courtesy of the GARRETT FAMILY)

One Kilgore family welcomed home one of its own for a very special Memorial Day, special because of what is to come in June.

Graduating soon from the United States Military Academy in West Point, N.Y., will be Kilgoreite Noelle Garrett, daughter of Beth and Joe Garrett.

Due to the coronavirus, she is currently in Kilgore and had to finish up last week like other students by on-line. She will be returning to West Point Thursday and graduating on June 13 with President Donald Trump as the commencement speaker.

“She will be graduating with honors and we are so proud of her,” Beth Garrett said. “When she first went in, we had no idea how involved her life would become. We didn’t get to hear from her while she was in boot camp except for a two-minute call on the Fourth of July.

There was a lot of involvement to getting her accepted in the beginning, too, her mother said.

“There were applications after applications to fill out and her teachers helped; then of course she had to pass a physical,” Beth Garrett said. “She had to be nominated by (U.S. Rep.) Louie Gohmert and then sit in an interview with 10 other applicants before being chosen. It was a long process and we could not have been any prouder.”

Noelle, who was valedictorian of her class at Kilgore High School in 2016, said she will graduate with a degree in her major, Information Technology, and with a minor in Eurasian studies, and will be an officer in the Cyber Branch.

Noelle was accompanied to Kilgore by her boyfriend and classmate, Chris Forden, who will also be graduating at the same time. His branch is Aviation. He too has been working hard at completing online studies. Congratulations to both.

Rain stayed away from Harris Street Park in Kilgore Monday, where veterans and community members gathered at the Veterans Memorial Wall to honor American soldiers killed in the line of duty.

By 9 a.m. Monday, a crowd of dozens had arrived at the park for a program including patriotic music, remarks from veterans and the reading of accounts written by soldiers killed in combat.

Kilgore Veterans Association committee chairman and Vietnam veteran John Edney thanked guests for attending despite the poor weather and noted the day was an occasion for remembrance.

“We want to remember and honor those veterans, those soldiers, that gave their lives for our freedoms and we want to stand here today to remember them,” Edney said.

“That’s very important that we keep doing this every year to keep this remembrance going on and on. Our children’s children can do this for us.”

Following Edney’s comments, Mitzi Buck Hartfiel stepped up to the podium to perform several songs, including “God Bless America” and “The Star-Spangled Banner.” 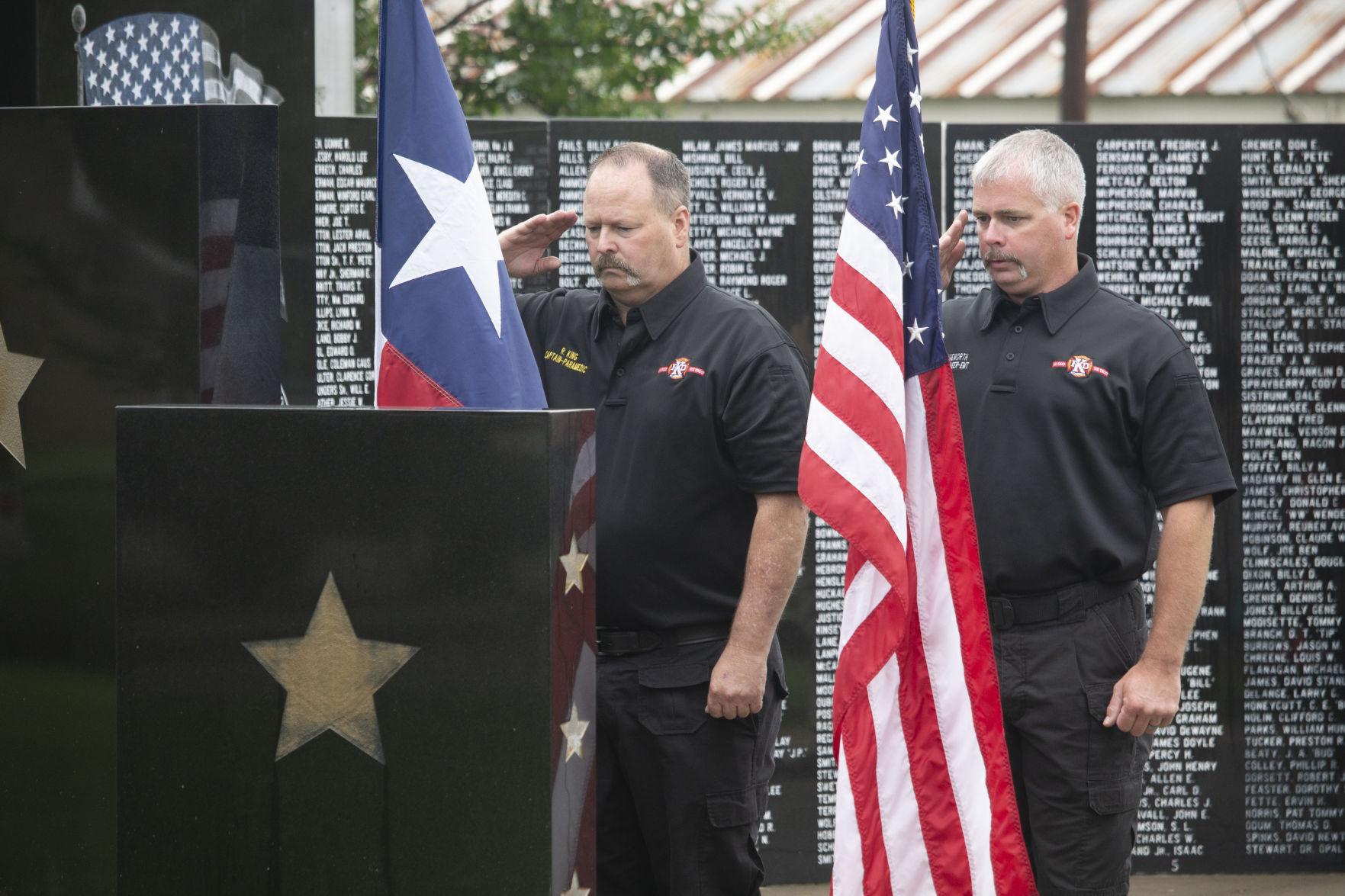 “Peace is liberty in tranquility.”

KILGORE MARKED Memorial Day Monday morning as a crowd of dozens gathered at Harris Street Park by the Memorial Wall. Veterans, along with their friends and family, raised their hands in salute and placed them over their hearts as they honored the memory of fallen brothers and sisters in arms.

Thank you to all who have served and are serving now in our armed forces. Check inside this edition for photos of the event, and our story chronicling it.

AS A CONTINUED reminder, because everything was so displaced due to the coronavirus, here are some upcoming graduation ceremony dates and info from high schools in our area.

West Rusk’s graduation is this Friday, May 29, at 8 p.m. at Bruce Bradshaw Stadium on campus, and Overton High School seniors will also graduate on campus at Coach Chester Roy Stadium this Friday, at 7:30.

Leverett’s Chapel’s graduation will be Friday night, June 12, at 8 p.m. at the LC stadium. LC will follow recommendations set by TEA, as far as social distancing guidelines.

JUST A FEW days ago, Gov. Greg Abbott issued further guidelines for reopening Texas. While not everything is back to normal quite yet, state legislators are gradually easing restrictions first put into place just two months ago in the midst of the COVID-19 pandemic.

Bars, restaurants and salons are some of the locations which are reopening, but it’s important to note these openings are conditional, and customers and staff are asked to abide by safety protocols.

Learn more from the Texas Dept. of Health and Human Services here: https://www.dshs.state.tx.us/coronavirus/opentexas.aspx.

FOR THOSE OF YOU with a green thumb in Kilgore, how are your gardens coming along?

We saw some rain over the Memorial Day weekend that is spurring on the growth of flowers, herbs and veggies. If this weather pattern keeps up, we may see a bumper crop of homemade salsa and pickles this fall.

“As we express our gratitude, we must never forget that the highest appreciation is not to utter words but to live by them.”

News
Housing market in Kilgore continues to rise, even during the pandemic
By JESSICA HARKER Jharker@kilgorenewsherald.com
05.27.20
Courtesy Photo from realtor.com

The Windsor Park area of Kilgore has been the area where the majority of residential permits in Kilgore have been issued in the last two years, Kilgore City Manager Josh Selleck said. Kilgore has seen an uptick in both residential and commercial business recently.

Over the past two years, real estate in Kilgore has seen a rise in sales, both residential and commercial.

City Manager Josh Selleck said that a number of businesses have begun to take in interest in Kilgore, with the addition of a new Daiquiri Express, Popeyes and Dairy Queen already planned and under construction, as documented in recent issues of the News Herald.

Selleck said that by the end of the year, the city can expect the number of new businesses to double to six, at least.

“It is an attractive area, and a lot of that has to do with the work the city council has put in,” Selleck said.

In the last two years, Kilgore has added 25 new residential permits, valued collectively at over $3 million.

According to a report generated by Josie Atchley, Kilgore’s permit office manager, even during March this year, at height of the pandemic, the Kilgore City Council still issued a new residential permit.

“We have been focusing for a number of years on increasing the quality of life in the city, and people are starting to take notice,” Selleck said.

He said that real estate in the Windsor Park area seems to be the focus of the growth, with a majority of the permits issued in the last two years focusing in and around that area.

“With all of the changes that the council has put in place over the past 10 years, it really is not surprising that our real estate continues to grow,” Selleck said.

Since the 2008 market crash, Texas is one of the few states that has seen a substantial come back in the last 12 years.

According to a study done by Apartmentguides.com, over 50 percent of the new residential housing units in the country were in the south in 2019, even though only about 31 percent of the country’s population lives there.

This boom, coupled with projects organized by the Kilgore City Council and other local organizations, have come together to create a positive financial impact within the city, even during one of the hardest economic situations within the past decade.

“This is not new. This is something we have been working on for a long time, even before I came here as city manager. The fact that we can get through the current situation as well as we have is a testament to that,” Selleck said. 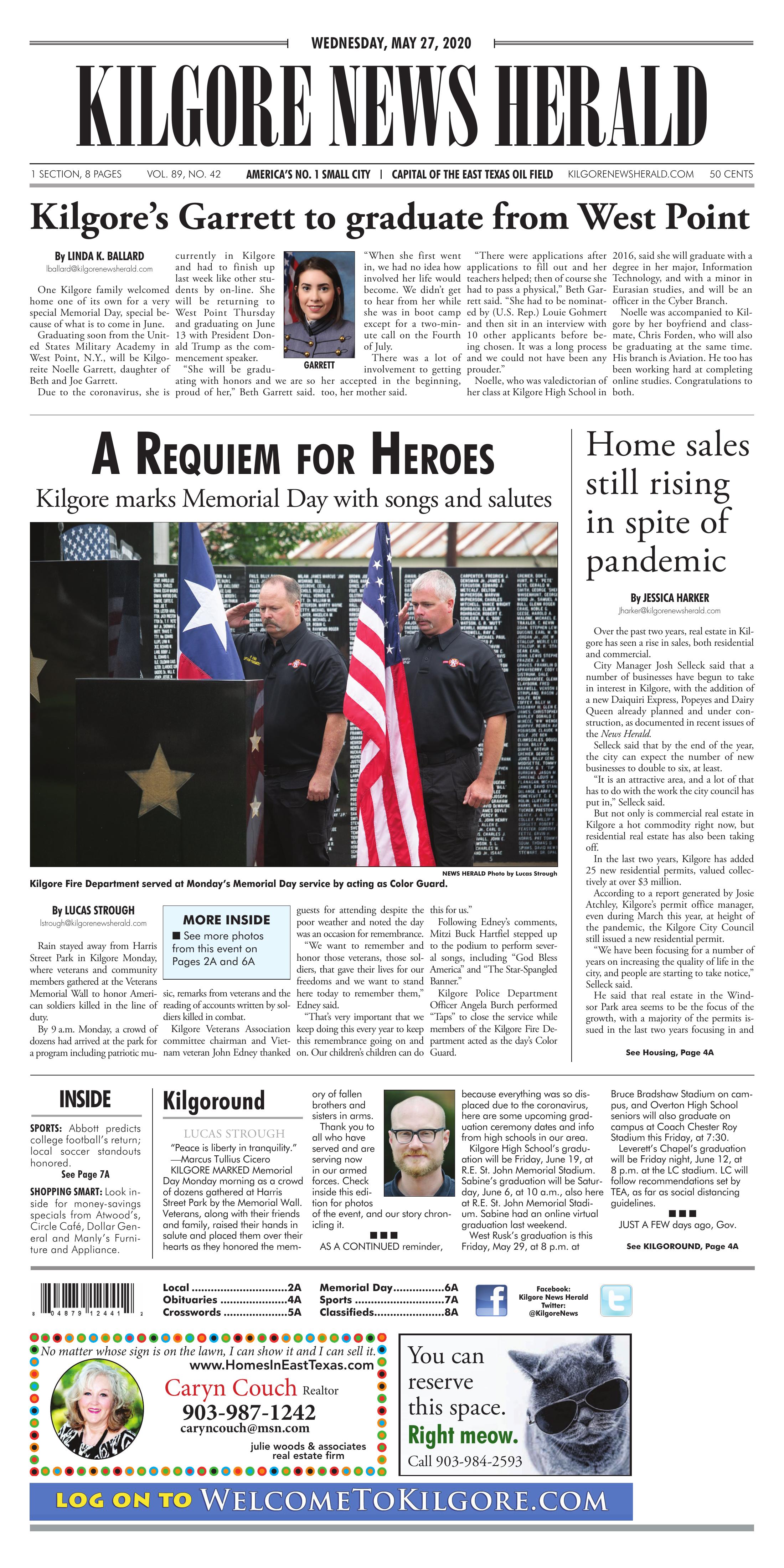