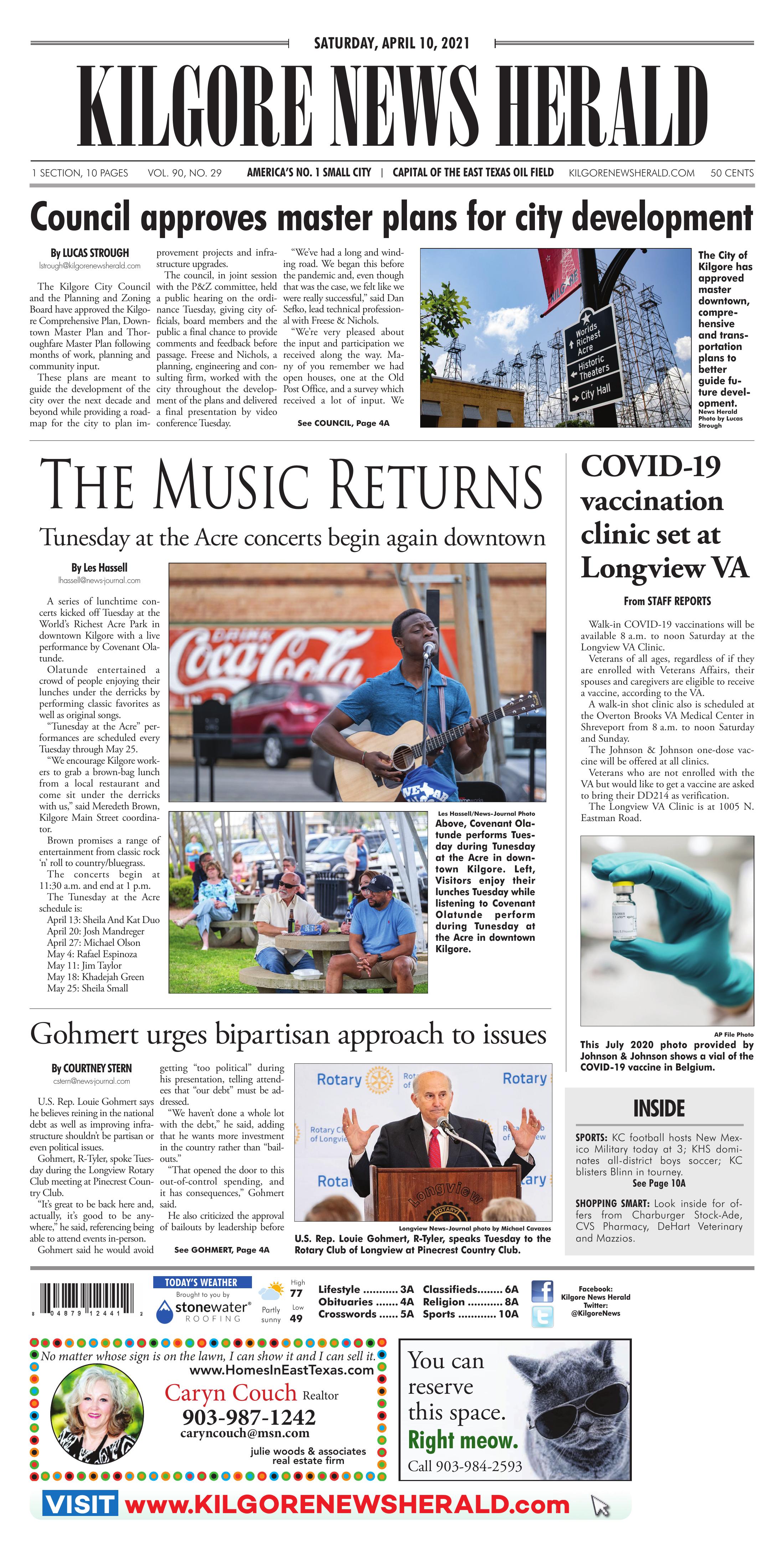 The Kilgore City Council and the Planning and Zoning Board have approved the Kilgore Comprehensive Plan, Downtown Master Plan and Thoroughfare Master Plan following months of work, planning and community input.

These plans are meant to guide the development of the city over the next decade and beyond while providing a roadmap for the city to plan improvement projects and infrastructure upgrades.

The council, in joint session with the P&Z committee, held a public hearing on the ordinance Tuesday, giving city officials, board members and the public a final chance to provide comments and feedback before passage. Freese and Nichols, a planning, engineering and consulting firm, worked with the city throughout the development of the plans and delivered a final presentation by video conference Tuesday.

“We’ve had a long and winding road. We began this before the pandemic and, even though that was the case, we felt like we were really successful,” said Dan Sefko, lead technical professional with Freese & Nichols.

“We’re very pleased about the input and participation we received along the way. Many of you remember we had open houses, one at the Old Post Office, and a survey which received a lot of input. We worked with the CPAC committee (Comprehensive Plan Advisory Committee), and they provided us wisdom and guidance through the process. We had open houses again to present the recommendations we prepared and we had joint workshops with P&Z and the city council. We worked very hard to make sure this is Kilgore’s plan and we feel like we’ve done that.”

The process began with an “Open House” at the Old Post Office in August 2019, which invited members of the community to attend and write down things they’d like to see developed in Kilgore over the next 10 years. Following this initial meeting, community responses were studied before moving on to interviews with key stakeholders in Kilgore, including business owners, residents and civic groups.

The objective most desired by the community, as determined by the community-wide study, is to encourage more activities and entertainment. Specifically, Kilgoreites want to see more frequent concerts to highlight local performers; more shopping and sit-down restaurants; to revitalize older facilities; a community center; and more clusters of activity.

Also desired are more housing options, including smaller homes, apartments and low-cost rentals. Going along with this desire is a request for the improvement of existing housing options and neighborhoods, with some community members noting Kilgore has affordable housing options but these are in poor condition and many of the neighborhoods are old and in need of upgrades and repair.

In regards to the Transportation Plan, which covers roads and thoroughfares in and around the city, residents wanted to see improvements to Synergy Park, improvements to Interstate 20 backage and frontage roads, I-20 interchange improvements, and improved access to the landfill.

Also included in the Comprehensive Plan is the Downtown Master Plan, which covers improvements to existing structures and potential new developments in Kilgore’s historic downtown district. According to the survey’s findings, the most desired improvements to the downtown area are:

An online survey conducted to bolster the findings of the study found that respondents most agreed with the statement “Vacant buildings in Downtown Kilgore deter or prevent me from visiting the area.”

In turn, they most disagreed with the statement: “There is adequate housing (apartments, lofts, townhomes, etc.) in or near Downtown Kilgore.”

“We’ve also dealt with wayfinding signage, a number of changes to our development processes that we heard from the community separate from the processes and also from Freese & Nichols during the process. This has been a very good process for Kilgore with a lot of immediate improvements, as well as long-term improvements.”

The Transportation Plan includes improvements to existing thoroughfares and roadways, as well as the construction of new roads. The Downtown Plan includes a new land use map, along with eight new projects, including proposed medium-density housing options, a park, and development of unused areas near Kilgore College.

“(The Downtown Plan) is where we saw the bigger changes at the last meeting,” Selleck said.

“We took some of the more specific projects and tried to generalize them so that they became representative of the overall goal of that type of project, rather than being so granular,” Selleck said. “It may not be possible to put a duplex on this specific tract, but we took an entire area and said this is far enough outside of the core so a medium-density housing development is more appropriate anywhere in this area. One of the other big changes is, in the downtown core, we got much more specific as to what we’re calling the ‘downtown core’ and the rigid rules that are associated with it.”

This T-shaped core, which follows Main Street and Kilgore Street, will be placed under strict development rules to preserve the appearance and character of this historic downtown area.

“That core is the area that must be most heavily protected and focused on first-floor commercial,” Selleck said. “Outside of that, we allow for more mixed uses and a bit more creativity in the live/work mix that is possible downtown.”

The city aims to use downtown development to make it easier for locals to live and work in the area, a goal which will benefit the city over time.

“The more people that live in close proximity to downtown and are able to depend on downtown for their daily needs, shopping, restaurants, etc., the better downtown will be,” Selleck said.

You can access additional information about the plan online at https://clients.freese.com/kilgore/.

Everly Whiteley, 4, dances to music while having lunch Tuesday with her mother, Angela, during Tunesday at the Acre in downtown Kilgore.

Covenant Olatunde performs Tuesday during Tunesday at the Acre in downtown Kilgore.

Everly Whiteley, 4, enjoys lunch with her mother, Angela, on Tuesday while listening to music during Tunesday at the Acre in downtown Kilgore.

Everly Whiteley, 4, plays on a oil derrick Tuesday in the World’s Richest Acre while listening to live music during Tunesday at the Acre in downtown Kilgore.

A series of lunchtime concerts kicked off Tuesday at the World’s Richest Acre Park in downtown Kilgore with a live performance by Covenant Olatunde.

Olatunde entertained a crowd of people enjoying their lunches under the derricks by performing classic favorites as well as original songs.

“Tunesday at the Acre” performances are scheduled every Tuesday through May 25.

“We encourage Kilgore workers to grab a brown-bag lunch from a local restaurant and come sit under the derricks with us,” said Meredeth Brown, Kilgore Main Street coordinator.

Brown promises a range of entertainment from classic rock ‘n’ roll to country/bluegrass.

The Tunesday at the Acre schedule is:

U.S. Rep. Louie Gohmert says he believes reining in the national debt as well as improving infrastructure shouldn’t be partisan or even political issues.

“It’s great to be back here and, actually, it’s good to be anywhere,” he said, referencing being able to attend events in-person.

Gohmert said he would avoid getting “too political” during his presentation, telling attendees that “our debt” must be addressed.

“We haven’t done a whole lot with the debt,” he said, adding that he wants more investment in the country rather than “bailouts.”

“That opened the door to this out-of-control spending, and it has consequences,” Gohmert said.

He also criticized the approval of bailouts by leadership before the Trump Administration.

“(Former President Donald Trump) did a marvelous job with the U.S. economy,” Gohmert said, adding that Trump did not, however, do much to address the national debt.

Gohmert believes infrastructure also should be a bipartisan issue.

“We do need a lot of help with infrastructure,” he said after his speech. “I was hoping that would be a bill that would be bipartisan.”

President Joe Biden’s American Jobs Plan, with a price tag of about $2 trillion, is focused on job creation as well as more traditional infrastructure spending.

“During the Trump administration, I thought, well, that’s certainly something both sides of the aisle agree we need, but the feeling of Speaker (Nancy) Pelosi was that she didn’t want Trump getting credit for a big infrastructure package that would help America,” Gohmert said. “I felt like that’s something that could be bipartisan back then, and I still think so, but what we’re seeing is anything that has infrastructure has so much other stuff.”

Biden’s plan also would include investments in other areas, such as childcare provision in the workplace and more.

He referenced Biden’s plan to increase taxes for corporations in order to offset spending from the bill over 15 years.

“It’s bad enough we’re giving future generations all this debt — we at least can give them good infrastructure,” Gohmert said. “I don’t want to be part of the generation that does that to them.”

He also talked about taking a trip to the border and the issue of children being detained.

Gohmert said he believes something much be done to address the issue, adding it was more under control under the Trump Administration.

The eight-term Congressman also discussed being attacked and the importance of defending himself from criticism.

“In politics, when somebody keeps attacking your honor, and you continue to choose not to defend it, eventually people will think you have no honor,” Gohmert said.

He said he believes the biggest mistakes of former presidents George H.W. Bush and George W. Bush include a mentality that they would not go out of their way to defend themselves from criticism, calling the latter “one of the most likable guys in the world.”

“Former President (George H.W.) Bush had a policy that he was not going to respond to outrageous attacks, and he was, in his words, not going to dignify crazy allegations with a response,” Gohmert said, adding, “I think it’s important for history’s sake to defend yourself when you’re in the right.”

With the recent death of his father, Gohmert said he had been in a time of reflection. He said God has been faithful to his family and that he is proud to serve East Texas.

“I’m just thrilled to get out and go to stuff again,” he said.

Walk-in COVID-19 vaccinations will be available 8 a.m. to noon Saturday at the Longview VA Clinic.

Veterans of all ages, regardless of if they are enrolled with Veterans Affairs, their spouses and caregivers are eligible to receive a vaccine, according to the VA.

A walk-in shot clinic also is scheduled at the Overton Brooks VA Medical Center in Shreveport from 8 a.m. to noon Saturday and Sunday.

The Johnson & Johnson one-dose vaccine will be offered at all clinics.

Veterans who are not enrolled with the VA but would like to get a vaccine are asked to bring their DD214 as verification.

The Longview VA Clinic is at 1005 N. Eastman Road.