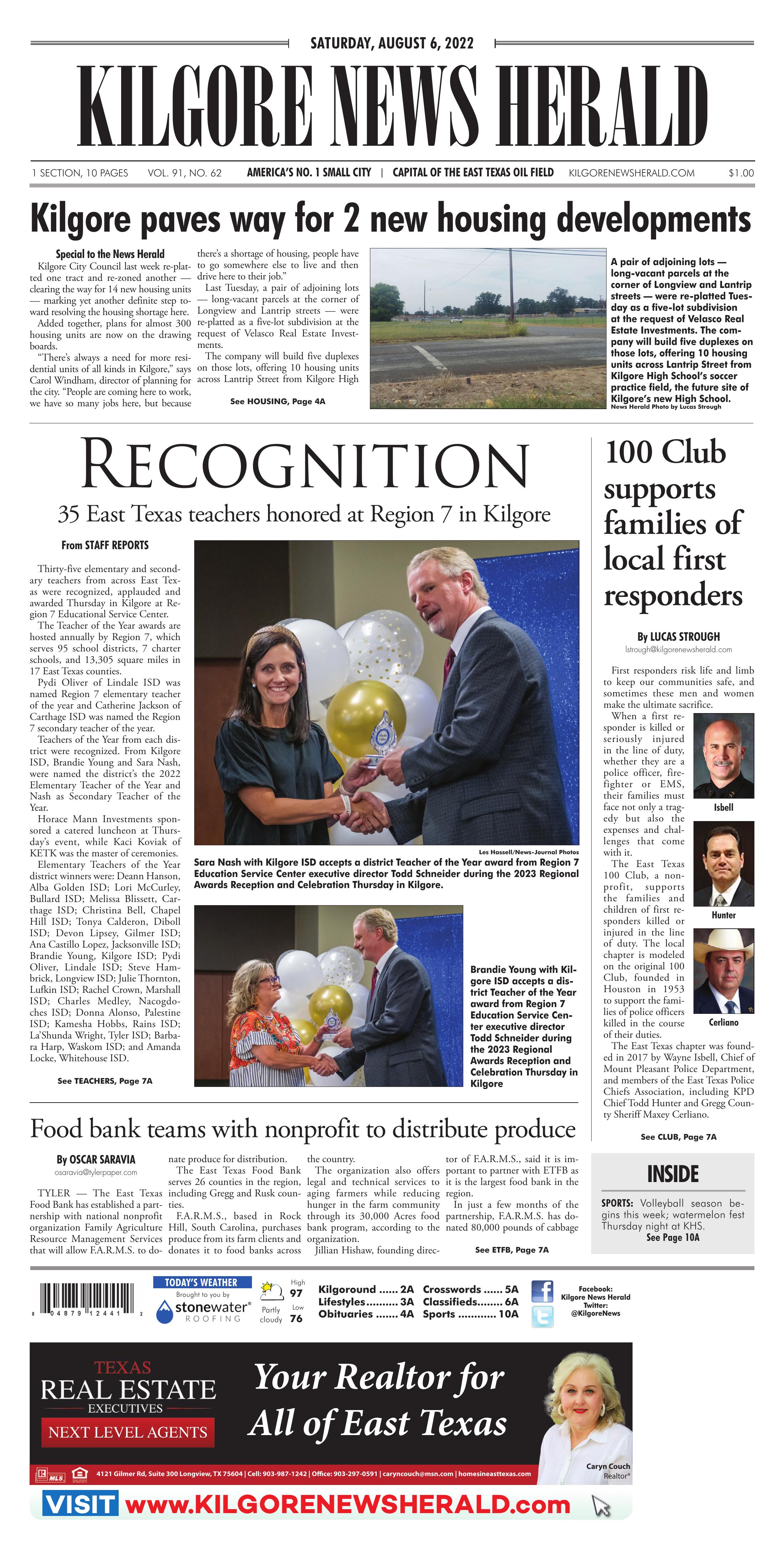 A pair of adjoining lots — long-vacant parcels at the corner of Longview and Lantrip streets — were re-platted Tuesday as a five-lot subdivision at the request of Velasco Real Estate Investments. The company will build five duplexes on those lots, offering 10 housing units across Lantrip Street from Kilgore High School’s soccer practice field, the future site of Kilgore’s new High School.

A large lot at the corner of Birdsong Street and Stone Road was re-zoned to a Planned Development from its longtime zoning status, Single Family Residential. Vasan Management of Longview intends to build four townhomes on that property — two units in each of two structures to be sold or leased.

Kilgore City Council last week re-platted one tract and re-zoned another — clearing the way for 14 new housing units — marking yet another definite step toward resolving the housing shortage here.

Added together, plans for almost 300 housing units are now on the drawing boards.

“There’s always a need for more residential units of all kinds in Kilgore,” says Carol Windham, director of planning for the city. “People are coming here to work, we have so many jobs here, but because there’s a shortage of housing, people have to go somewhere else to live and then drive here to their job.”

Last Tuesday, a pair of adjoining lots — long-vacant parcels at the corner of Longview and Lantrip streets — were re-platted as a five-lot subdivision at the request of Velasco Real Estate Investments.

Also Tuesday, a large lot at the corner of Birdsong Street and Stone Road was re-zoned to a Planned Development from its longtime zoning status, Single Family Residential. Vasan Management of Longview intends to build four townhomes on that property — two units in each of two structures to be sold or leased.

Arun Srinivasan told council members his company, Vasan, has built a number of similar units in Longview and that they have been “very well accepted.” The homes, contemporary in design and fronting on Birdsong, will be built of what Vasan describes as tightly sealed concrete walls promising energy efficiency as well as fire and storm resistance. Each will be 1,200 square feet with either two or three bedrooms and two baths.

Windham says a site plan has been approved for the Birdsong project. More detailed plans are expected soon for the Lantrip project, she says. With those plans “we approve setbacks, parking, water and sewer connections, drive approaches, that sort of thing.”

Both decisions come while other residential construction projects are at various stages of development.

In Remington North, four single-family homes are under construction. Farther east of town, on FM 2276, plans are being drawn for a residential subdivision on a newly annexed tract on FM 2276. A preliminary plat showing 29-lots owned by Danny Males Development has been submitted to city planners and site plans are still being developed.

At 901 Broadway Blvd., a dilapidated structure across the street from The Back Porch will be remodeled and modernized as an apartment building with eight to 10 units, while downtown the old bus station is being redeveloped with space for retail on the ground floor and two apartments upstairs.

Meanwhile, city staff recently met with the engineer for a firm planning an upscale apartment complex with 192 units, each with its own garage. That plan is still in early development stages.

“The past several years have seen unprecedented development activity in Kilgore with new restaurants, shopping opportunities and the current housing boom” said Josh Selleck, City Manager. “But what is most exciting is what this all means to the city.” Selleck explained that 15 years ago the City Council started down a path to improve the quality of life in Kilgore with new parks, improved roads and modern utilities. “We believe this extraordinary growth is the proof that the council’s plan has worked, and we couldn’t be happier to celebrate this success.”

Thirty-five elementary and secondary teachers from across East Texas were recognized, applauded and awarded Thursday in Kilgore at Region 7 Educational Service Center.

The Teacher of the Year awards are hosted annually by Region 7, which serves 95 school districts, 7 charter schools, and 13,305 square miles in 17 East Texas counties.

Horace Mann Investments sponsored a catered luncheon at Thursday’s event, while Kaci Koviak of KETK was the master of ceremonies.

A child holds chocolate milk provided by the East Texas Food Bank during a summer food program event June 7 at the Glass Recreation Center in Tyler.

Children take a bite and sip beverages June 7 provided by the East Texas Food Bank during a summer food program event at the Glass Recreation Center in Tyler.

The East Texas Food Bank serves 26 counties in the region, including Gregg and Rusk counties.

F.A.R.M.S., based in Rock Hill, South Carolina, purchases produce from its farm clients and donates it to food banks across the country.

The organization also offers legal and technical services to aging farmers while reducing hunger in the farm community through its 30,000 Acres food bank program, according to the organization.

Jillian Hishaw, founding director of F.A.R.M.S., said it is important to partner with ETFB as it is the largest food bank in the region.

In just a few months of the partnership, F.A.R.M.S. has donated 80,000 pounds of cabbage and potatoes to rural East Texans.

“ETFB is an ideal partner for F.A.R.M.S since many of the counties that receive services from their foodbank are rural,” Hishaw said. “This aligns with our mission as 90 percent of F.A.R.M.S. resources are exclusively devoted to rural farming communities.”

Part of the partnership’s goal is to cover the increasing cost of transportation to serve rural communities that are in need.

Due to rising costs and inflation, many food banks are unable to deliver food to certain areas. F.A.R.M.S. will aid the East Texas Food Bank with funds needed to cover transportation costs, according to the organization.

Cullinane said ETFB is excited to form the partnership as it will help the organization fulfill its long-term goal of maximizing food distribution.

“Our strategic goal is to increase food distribution to 32 million meals by 2025,” he said. “Providing healthy food like fresh produce to help our neighbors struggling with hunger is so important to our mission of fighting hunger in East Texas.”

The East Texas Food bank recently announced it will open a resource and fresh produce center in 2023.

The food bank encourages residents in need to visit the ETFB website, click on the find food button and look for the county of residence.

Smith County Sheriff's Deputy Lorenzo Bustos, 29, was killed in the early morning of Friday, July 29 after he was hit by an intoxicated driver while making a traffic stop on State Highway 155. Bustos is survived by a wife and children ages 4, 5 and 8, family and friends. East Texas 100 Club immediately wrote a $10,000 check to Bustos' family to help with costs and needs following the tragedy.

First responders risk life and limb to keep our communities safe, and sometimes these men and women make the ultimate sacrifice.

When a first responder is killed or seriously injured in the line of duty, whether they are a police officer, firefighter or EMS, their families must face not only a tragedy but also the expenses and challenges that come with it.

The East Texas 100 Club, a nonprofit, supports the families and children of first responders killed or injured in the line of duty. The local chapter is modeled on the original 100 Club, founded in Houston in 1953 to support the families of police officers killed in the course of their duties.

“At the beginning, as we were just getting it off of the ground, it was just for law enforcement,” Hunter said. “We began to move the program forward. What we wanted to do all the time was move it forward for all first responders, to include EMS and fire. We have since paid out benevolence funds to an EMS worker and a firefighter and several police officers.”

Bustos, 29, was killed in the early morning of Friday, July 29 after Smith County Sheriff Larry Smith said he was hit by an intoxicated driver while making a traffic stop on State Highway 155. Another deputy was injured in the crash. The driver has been arrested and will be charged with intoxication manslaughter.

Bustos is survived by a wife and children ages 4, 5 and 8, family and friends.

“As soon as we heard of (Bustos’ death), the committee was contacted and immediately the check was cut in the amount of $10,000. That’s our threshold,” Hunter said.

He explained the funds are specifically intended to be used by family members for immediate needs and costs following tragedies like these.

“We do know that the family could receive some state and federal benefits in time. But with bureaucracy, it often takes months for those things to come about. Meanwhile, there is a spouse there that has an immediate need. There may be someone they have to fly in, there may be a mortgage payment due or the car payment is due. They may need to buy clothes for the funeral. There are other expenses that she or he does not need to deal with at that time. This is an immediate check from citizens within the region that this public safety worker works in that is provided within 24 hours and they have some of those immediate needs taken care of,” he said.

The board of the East Texas 100 Club meets to discuss the use of benevolence funds in support of fallen first responders, such as in the 2019 death of Panola County Deputy Chris Dickerson, 28, who was shot and killed while conducting a traffic stop.

Hunter said the board has plans for the organization to grow over time and provide resources to local first responders in the form of training and equipment.

“It was started as benevolence in Houston but, over time, they were able to begin to provide equipment and training. So, as the association grew, they were able to provide more to law enforcement. With us, right now, our funds are low and all we can do is just support our fallen. But in time, that has been something we would like to incorporate into the program, when the funds are available.”

To learn more about how you can help support the families of local first responders killed or injured in the line of duty, visit www.easttexas100club.org/give. Donations can be made at an annual subscription level or at a lifetime subscription level. Donation options for both individuals and corporations are available. Members receive a sticker to show their support, listing on the 100 Club website and special thanks for lifetime memberships.

Click and hold your mouse button on the page to select the area you wish to save or print. You can click and drag the clipping box to move it or click and drag in the bottom right corner to resize it. When you're happy with your selection, click the checkmark icon next to the clipping area to continue.