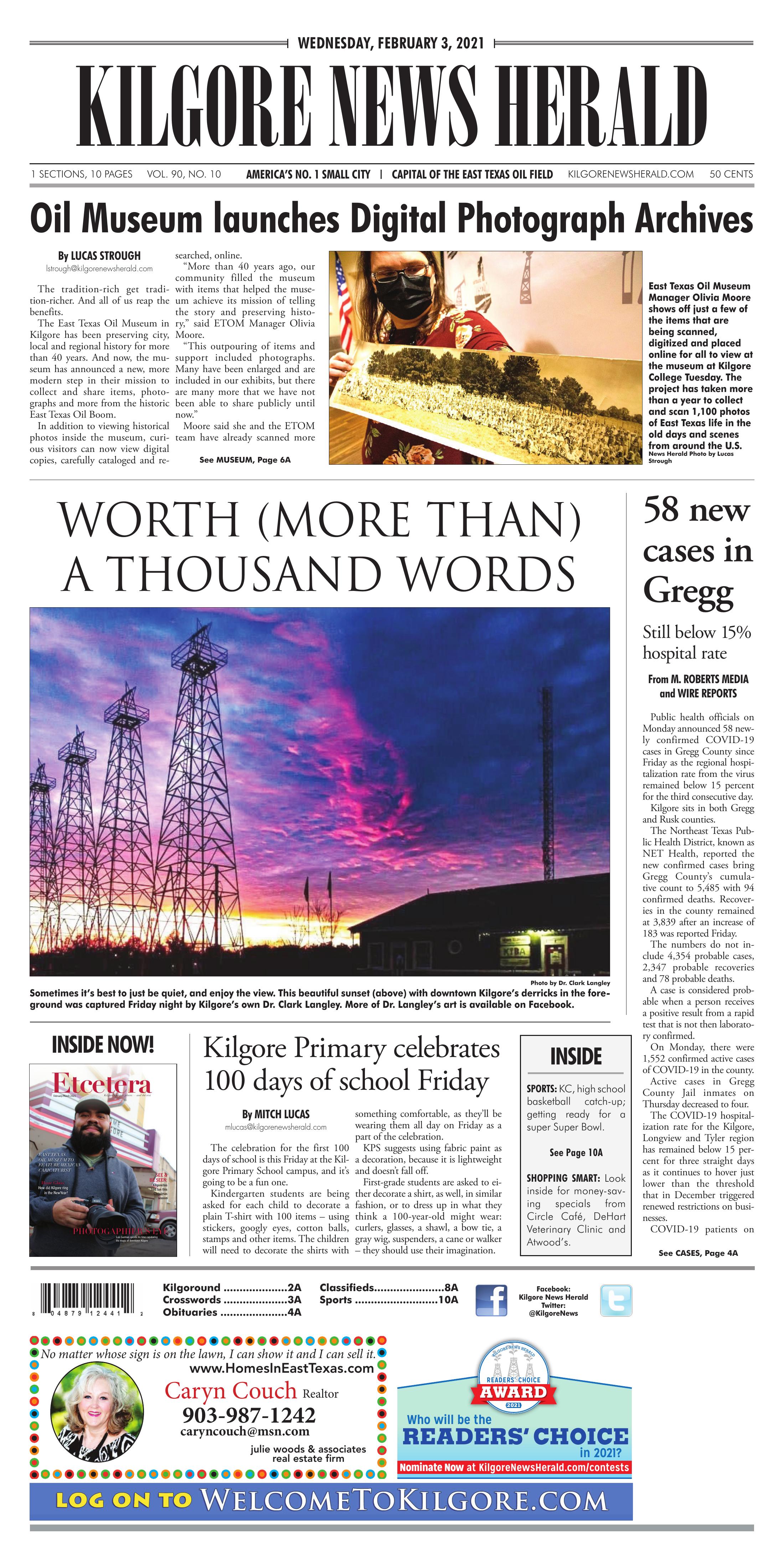 East Texas Oil Museum Manager Olivia Moore shows off just a few of the items that are being scanned, digitized and placed online for all to view at the museum at Kilgore College Tuesday. The project has taken more than a year to collect and scan 1,100 photos of East Texas life in the old days and scenes from around the U.S.

The photos span from before the East Texas Oil Boom. Huge “yardlongs” like the one seen here were popular in those days for large group photos for companies and businesses, many of them working in the oil trade which sprang up in Kilgore and around East Texas. News Herald Photo

The East Texas Oil Museum in Kilgore has been preserving city, local and regional history for more than 40 years. And now, the museum has announced a new, more modern step in their mission to collect and share items, photographs and more from the historic East Texas Oil Boom.

“More than 40 years ago, our community filled the museum with items that helped the museum achieve its mission of telling the story and preserving history,” said ETOM Manager Olivia Moore.

“This outpouring of items and support included photographs. Many have been enlarged and are included in our exhibits, but there are many more that we have not been able to share publicly until now.”

Moore said she and the ETOM team have already scanned more than 1,100 of the images, labeled and sorted for easy searching.

The job is not yet done: Moore said there are another 2,000 images to be sorted and scanned and the site is updated daily with new photos.

A Kilgore College student, Cedric Pete, pitched in a personal workload of more than 50 hours spent scanning the images.

The project began in July 2019, Moore said, and the team scanned the first photograph in July of 2020. Since then, it’s been a steady and concerted effort to prepare for the website’s launch.

Some of the photographs were donated as far back as 1978 and as recently as 2020.

“Each Friday became archives day, which included carefully viewing, verifying against the catalog and accession records and finally scanning the image before returning to the storage location.” Moore said. “Our docents have spent more than 100 hours working toward our goal with special thanks to Ms. Barb Ramsey, Ms. Dee Baker and Ms. Joy Jordon.”

Moore said she hopes longtime museum visitors and anyone with an interest in local history “will find treasures, East Texas Oilfield history and another side of the story the museum strives to tell each day.”

Moore’s tenure as ETOM manager began by hitting the ground running, as she oversaw the first-ever major facility-wide renovation in its four-decade history. The renovation included new paint, murals, refurbished exhibit items and a new digital sound system in the museum’s Boomtown Theater.

The digital photo archive program was made possible in part by a grant from Humanities Texas.

“Without their support, we would not be able to bring this to you today,” Moore said.

Images uploaded so far include family photographs, pictures of downtown Kilgore, with its brand-new skyline of oil derricks and photos of Kilgore businesses and residents living and working in the city.

Images can be searched by specific keywords, general search terms or with a more-exact advanced search function. If users want to casually browse, there is also a “Random Images” search accessible from the homepage. Users who find an image which speaks to them can click the image and send in a request to ETOM for a digital copy of the image they want.

For more information, please contact Moore at (903) 983-8295 or omoore@kilgore.edu. The East Texas Oil Museum is located at 1300 S. Henderson Boulevard (Highway 259), as a part of the Kilgore College campus. 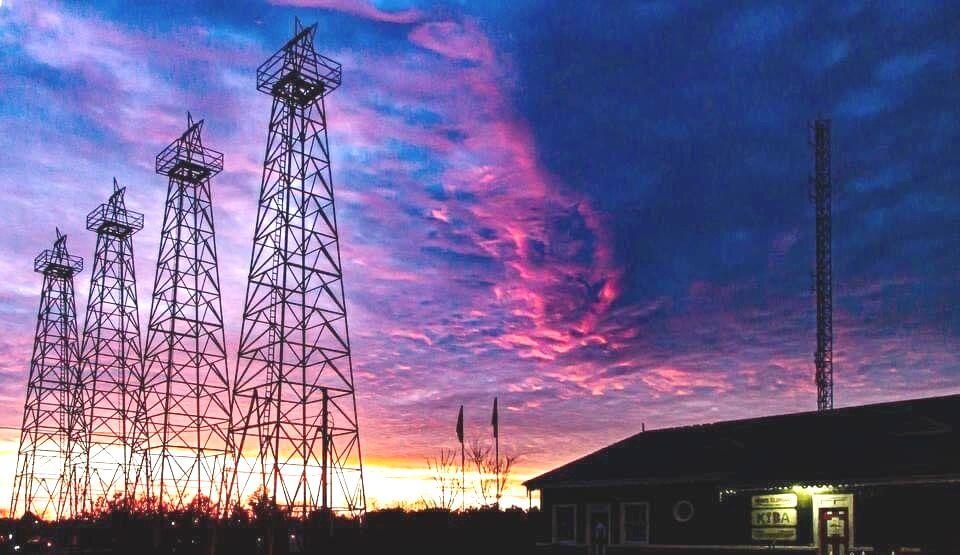 Sometimes it’s best to just be quiet, and enjoy the view. This beautiful sunset (above) with downtown Kilgore’s derricks in the foreground was captured Friday night by Kilgore’s own Dr. Clark Langley. More of Dr. Langley’s art is available on Facebook.

WORTH (MORE THAN) A THOUSAND WORDS

The celebration for the first 100 days of school is this Friday at the Kilgore Primary School campus, and it’s going to be a fun one.

Kindergarten students are being asked for each child to decorate a plain T-shirt with 100 items – using stickers, googly eyes, cotton balls, stamps and other items. The children will need to decorate the shirts with something comfortable, as they’ll be wearing them all day on Friday as a part of the celebration.

KPS suggests using fabric paint as a decoration, because it is lightweight and doesn’t fall off.

First-grade students are asked to either decorate a shirt, as well, in similar fashion, or to dress up in what they think a 100-year-old might wear: curlers, glasses, a shawl, a bow tie, a gray wig, suspenders, a cane or walker – they should use their imagination.

Public health officials on Monday announced 58 newly confirmed COVID-19 cases in Gregg County since Friday as the regional hospitalization rate from the virus remained below 15 percent for the third consecutive day.

Kilgore sits in both Gregg and Rusk counties.

The Northeast Texas Public Health District, known as NET Health, reported the new confirmed cases bring Gregg County’s cumulative count to 5,485 with 94 confirmed deaths. Recoveries in the county remained at 3,839 after an increase of 183 was reported Friday.

The numbers do not include 4,354 probable cases, 2,347 probable recoveries and 78 probable deaths.

A case is considered probable when a person receives a positive result from a rapid test that is not then laboratory confirmed.

On Monday, there were 1,552 confirmed active cases of COVID-19 in the county.

The COVID-19 hospitalization rate for the Kilgore, Longview and Tyler region has remained below 15 percent for three straight days as it continues to hover just lower than the threshold that in December triggered renewed restrictions on businesses.

COVID-19 patients on Sunday, the latest day for which data was available, accounted for 14.65 percent of hospital capacity in the Trauma Service Region G that stretches across a 19-county region in Northeast Texas and includes Gregg, Upshur, Rusk, Harrison, Panola and Smith counties.

Seven consecutive days of hospitalization rates above 15 percent for the Trauma Service Area on Dec. 20 set in motion renewed restrictions at businesses and restaurants in the region, per an executive order issued in October by Gov. Greg Abbott.

Seven consecutive days in which the COVID-19 hospitalization rate is less than 15 percent of total hospital capacity in the region are required to lift the mandate.

Where Tyler is located, In Smith County, NET Health reported 204 new confirmed cases of COVID-19 since Friday and four additional deaths. With the new cases, the county’s confirmed cases increased to 10,191 with 6,706 recoveries and 176 deaths.

On Monday, there were 208 patients with probable or confirmed COVID-19 being treated at Tyler hospitals, which is nine fewer than the 217 reported Friday.

State health officials reported 11,074 patients hospitalized as Texas continued its steady decline from a record high 14,218 on Jan. 11. That decline has also coincided with a rapid rise in deaths reported at the state has now surpassed 36,500 with 48 newly-reported deaths Monday.

The drive-through vaccine hub at Texas Motor Speedway opens Tuesday with a goal of distributing up to 10,000 shots per day. The site, which includes 131 acres (53.01 hectares) of parking lot, is expected to have 16 lanes for cars and patients will stay in their vehicles. Patients must have appointments through Denton County and proper identification.

“The ability to vaccinate 10,000 individuals in one day is a monumental task,” stated Dr. Matt Richardson, Director of Denton County Public Health.

Texas officials report more than 475,000 people have been fully vaccinated and 1.9 million people with at least one dose.