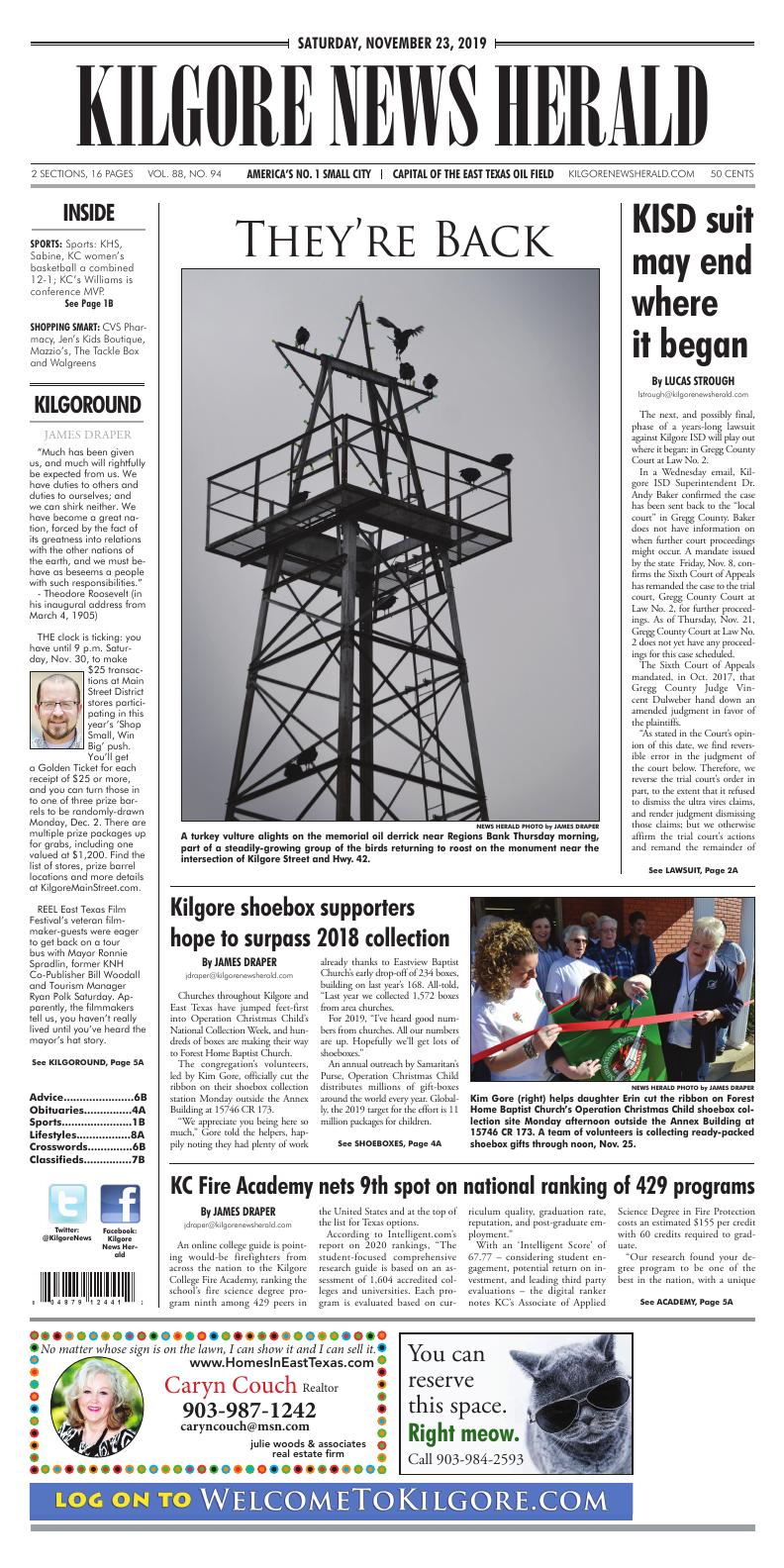 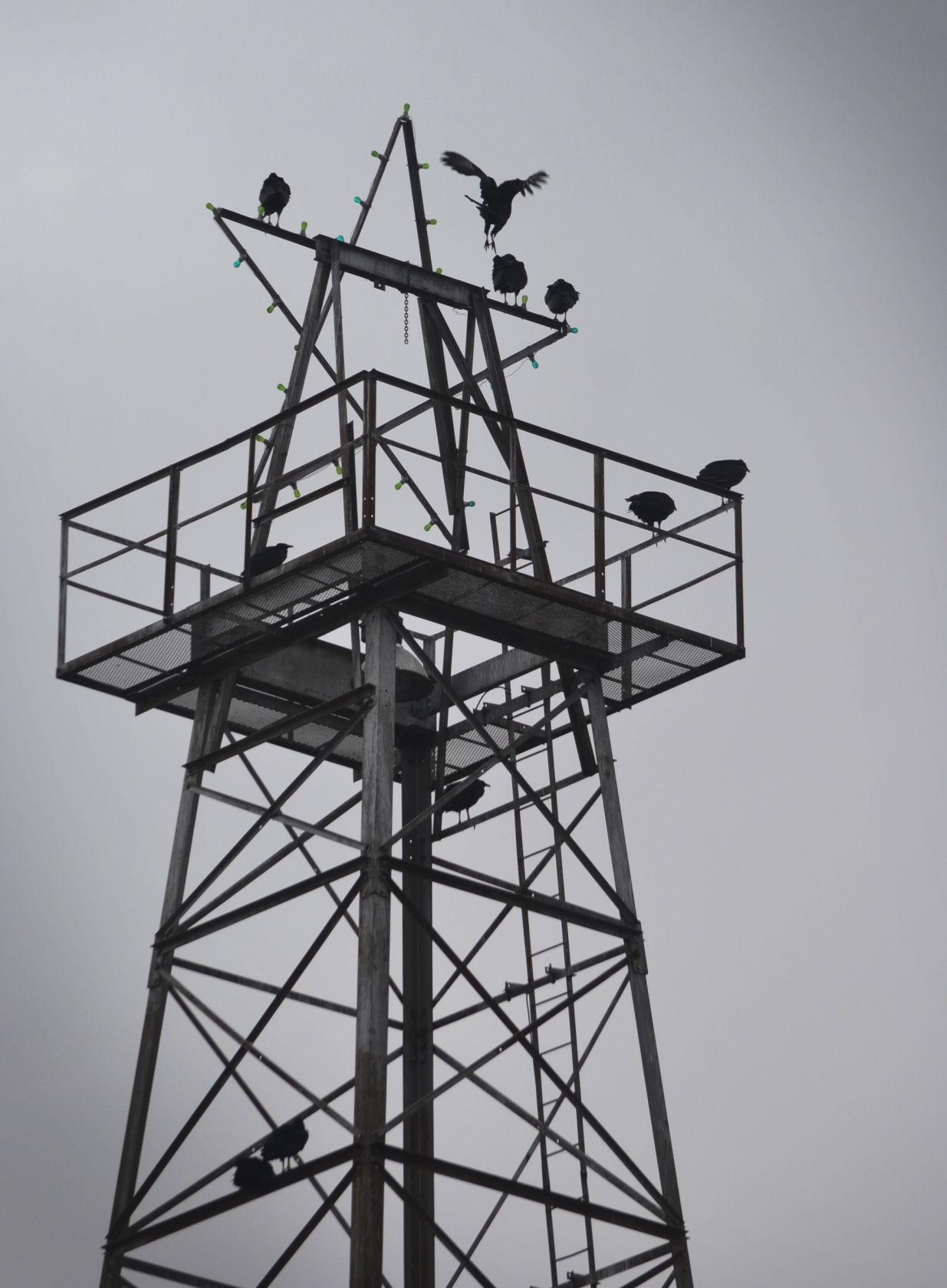 A turkey vulture alights on the memorial oil derrick near Regions Bank Thursday morning, part of a steadily-growing group of the birds returning to roost on the monument near the intersection of Kilgore Street and Hwy. 42.

Churches throughout Kilgore and East Texas have jumped feet-first into Operation Christmas Child’s National Collection Week, and hundreds of boxes are making their way to Forest Home Baptist Church.

The congregation’s volunteers, led by Kim Gore, officially cut the ribbon on their shoebox collection station Monday outside the Annex Building at 15746 CR 173.

“We appreciate you being here so much,” Gore told the helpers, happily noting they had plenty of work already thanks to Eastview Baptist Church’s early drop-off of 234 boxes, building on last year’s 168. All-told, “Last year we collected 1,572 boxes from area churches.

For 2019, “I’ve heard good numbers from churches. All our numbers are up. Hopefully we’ll get lots of shoeboxes.”

An annual outreach by Samaritan’s Purse, Operation Christmas Child distributes millions of gift-boxes around the world every year. Globally, the 2019 target for the effort is 11 million packages for children.

From Operation Christmas Child’s basic instructions: first, find a shoebox of average size then decide whether the gift is for a girl or a boy and determine the intended age range (2-5, 5-9 or 10-14). Third, fill it with gifts – “Select a medium to large ‘wow’ item such as a soccer ball with pump or stuffed animal, then fill with other fun toys, hygiene items and school supplies.”

Pray over the box, organizers encourage, and drop it off at a location by Nov. 25.

For more, specific instructions and helpful hints, log on to tinyurl.com/shoeboxpacking.

It’s the third year Forest Home has served as a collection site. Volunteers will be taking contributions through noon, Monday, Nov. 25, before taking the lot to Longview where they’ll be loaded onto cargo trucks for transport to the next large-scale hub in Dallas.

Supporters can also contribute to the worldwide effort by donating online.

For more information about Operation Christmas Child, call 903-790-1290 or log on to samaritanspurse.org/occ.

An online college guide is pointing would-be firefighters from across the nation to the Kilgore College Fire Academy, ranking the school’s fire science degree program ninth among 429 peers in the United States and at the top of the list for Texas options.

According to Intelligent.com’s report on 2020 rankings, “The student-focused comprehensive research guide is based on an assessment of 1,604 accredited colleges and universities. Each program is evaluated based on curriculum quality, graduation rate, reputation, and post-graduate employment.”

With an ‘Intelligent Score’ of 67.77 – considering student engagement, potential return on investment, and leading third party evaluations – the digital ranker notes KC’s Associate of Applied Science Degree in Fire Protection costs an estimated $155 per credit with 60 credits required to graduate.

“Our research found your degree program to be one of the best in the nation, with a unique distinction for Fire Protection Emphasis,” Intelligent.com Director of Communications Erica Fagien announced to KC leaders. “This speaks to the amazing work that your faculty is doing, and demonstrates to over 100,000 monthly visitors on our site, that your program provides top quality education that can help students achieve their career aspirations.”

It’s gratifying for KC Fire Academy Director Mike Simmons – especially, he says, since the distinction was spontaneous, coming out of the blue on the eve of the program’s 30{sup}th{/sup} anniversary.

“It certainly makes us feel good about what we’re doing,” he added, landing at 9{sup}th{/sup} in a list that includes both Associates and Bachelor’s degree programs. “The future plan is to hopefully become No. 1 on that list.”

One of the things that might have caught the rankers’ attention, he said, is the fire academy’s outreach to local high school students considering careers in the fire service.

“We’re currently working on plans to revamp our Associates degree program, to allow students to start their dual credit work in high school,” Simmons noted. “When they graduate from high school they qualify for the state of Texas firefighter tuition exemption program, which Kilgore College is a part of.”

At the same time, planning is underway to streamline students’ path from firefighting training in high school to studying at the KC Fire Academy to moving on to a link Bachelor’s degree.

Kilgore College Fire Academy has trained firefighters for a long time – almost 30 years to be exact. The academy will celebrate its 30th anniversary at a special graduation ceremony of the 108th class at 6 p.m. Wednesday, Dec. 4, in Van Cliburn Auditorium on the Kilgore campus.

News
KISD lawsuit may end where it began
lstrough  / By LUCAS STROUGH lstrough@kilgorenewsherald.com
11.23.19
lstrough / Document Courtesy of the State of Texas

The State of Texas and the Sixth Court of Appeals mandated Nov. 8 the ongoing lawsuit Axberg v. KISD be remanded to the court in which the suit was originally filed, Gregg County Court at Law No. 2.

The next, and possibly final, phase of a years-long lawsuit against Kilgore ISD will play out where it began: in Gregg County Court at Law No. 2.

In a Wednesday email, Kilgore ISD Superintendent Dr. Andy Baker confirmed the case has been sent back to the “local court” in Gregg County. Baker does not have information on when further court proceedings might occur. A mandate issued by the state Friday, Nov. 8, confirms the Sixth Court of Appeals has remanded the case to the trial court, Gregg County Court at Law No. 2, for further proceedings. As of Thursday, Nov. 21, Gregg County Court at Law No. 2 does not yet have any proceedings for this case scheduled.

The Sixth Court of Appeals mandated, in Oct. 2017, that Gregg County Judge Vincent Dulweber hand down an amended judgment in favor of the plaintiffs.

“As stated in the Court’s opinion of this date, we find reversible error in the judgment of the court below. Therefore, we reverse the trial court’s order in part, to the extent that it refused to dismiss the ultra vires claims, and render judgment dismissing those claims; but we otherwise affirm the trial court’s actions and remand the remainder of this lawsuit for further proceedings consistent with this opinion,” the mandate read.

The claim of “ultra vires” was asserted by the plaintiffs, accusing the KISD board of acting beyond the scope of their power in opting to repeal a Local Option Homestead Exemption in 2015. The Sixth Court of Appeals dismissed this part of the claim but upheld the remainder of the judgment.

On Sept. 16 of this year, KISD appealed this decision to the Texas Supreme Court by filing a motion for a rehearing. However, it was denied Oct. 18.

The most recent mandate from Nov. 8, which is posted on the Texas Judicial Branch’s website at www.TXCourts.gov, affirms the Sixth Court’s findings.

In all other respects, we reverse the trial court’s judgment. We remand this case to the trial court for further proceedings consistent with this opinion.”

The mandate also ordered KISD to pay 25 percent of the appeal costs and for Darlene Axberg, John Claude Axberg, and Sheila Anderson to pay 75 percent of all costs of appeal. This was a change from previous rulings, which ordered the costs of appeal to be split 50/50.

“Much has been given us, and much will rightfully be expected from us. We have duties to others and duties to ourselves; and we can shirk neither. We have become a great nation, forced by the fact of its greatness into relations with the other nations of the earth, and we must behave as beseems a people with such responsibilities.”

- Theodore Roosevelt (in his inaugural address from March 4, 1905)

THE clock is ticking: you have until 9 p.m. Saturday, Nov. 30, to make $25 transactions at Main Street District stores participating in this year’s ‘Shop Small, Win Big’ push. You’ll get a Golden Ticket for each receipt of $25 or more, and you can turn those in to one of three prize barrels to be randomly-drawn Monday, Dec. 2. There are multiple prize packages up for grabs, including one valued at $1,200. Find the list of stores, prize barrel locations and more details at KilgoreMainStreet.com.

MEA culpa: It’s more information than you’re looking for, but we tried to make sure all our recent club submissions were downloaded and organized for publication this issue and next, but we still managed to delete a set. If you submitted photos and don’t see them today, shoot us an email to jdraper @kilgorenewsherald.com.

WITH tree-trimming fast-approaching, we’re going to say it was cleverness, not laziness, that prompted us to leave all the decorations on our totable Christmas tree last winter. A quick lift, a little sprucing and we’ll be sipping the season’s first egg nog while the rest of you folks are still unboxing your ornaments. 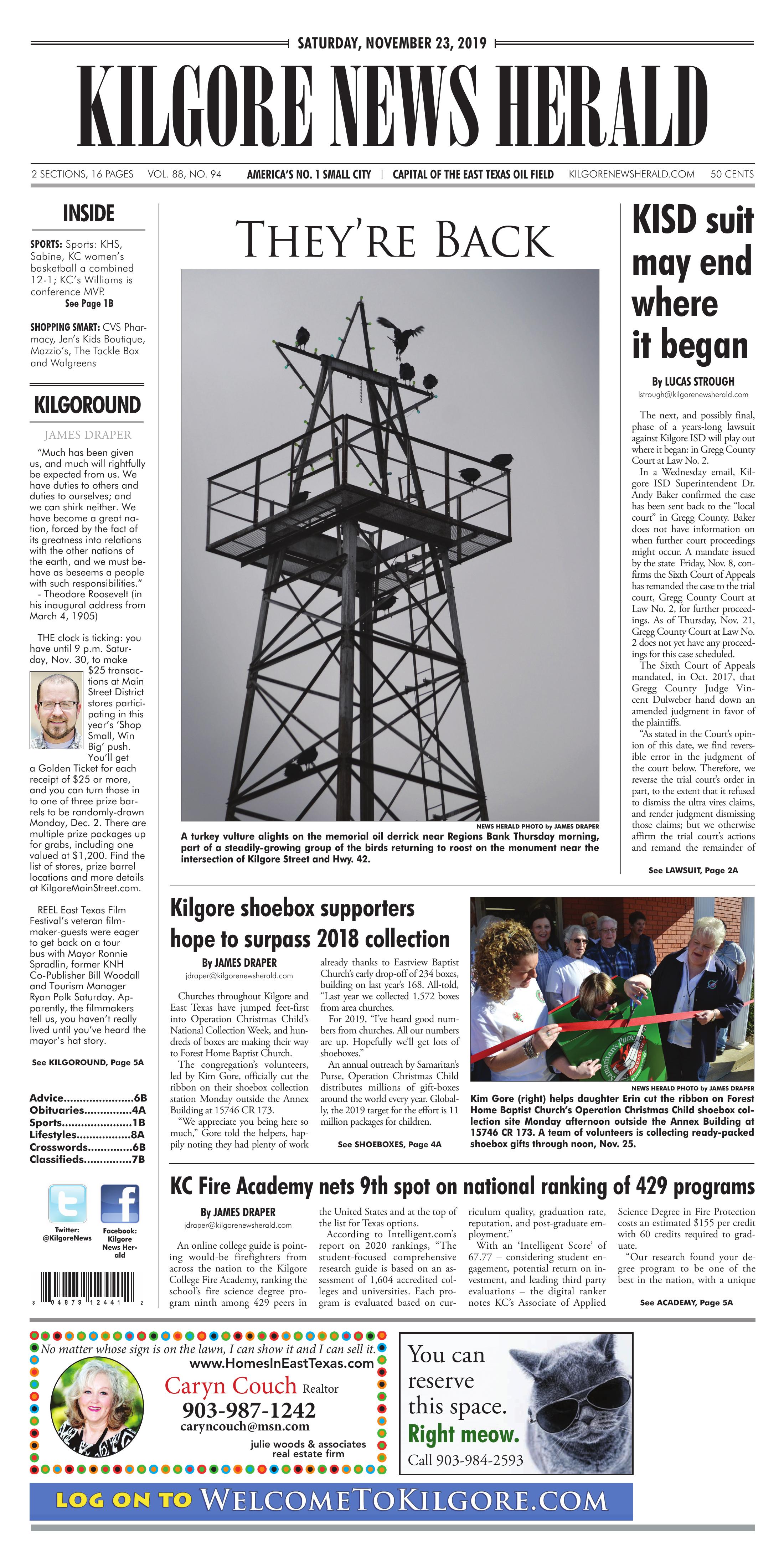