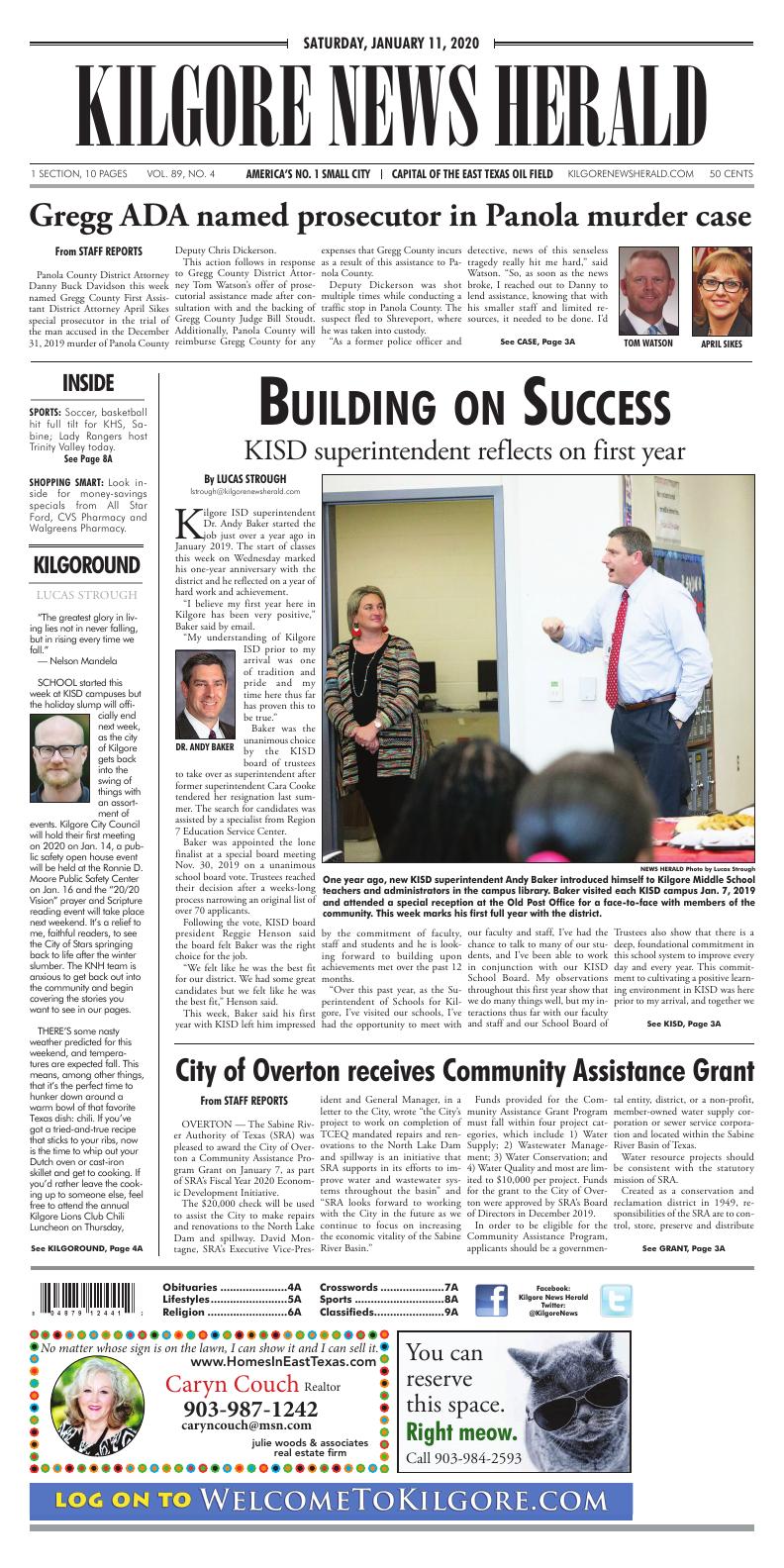 Deputy Dickerson was shot multiple times while conducting a traffic stop in Panola County. The suspect fled to Shreveport, where he was taken into custody.

“As a former police officer and detective, news of this senseless tragedy really hit me hard,” said Watson. “So, as soon as the news broke, I reached out to Danny to lend assistance, knowing that with his smaller staff and limited resources, it needed to be done. I’d do it for any neighboring county. The Judge agreed with me.”

Watson continued, “When a brother in blue is murdered, it hits home. It’s personal. This assistance is the right thing to do because of my office’s commitment to law enforcement and because support of law enforcement was a cornerstone promise in my campaign for District Attorney.”

On Thursday, Watson and Sikes traveled to the Panola County Courthouse, where District Judge Leann Rafferty administered the oath to Sikes, who has prosecuted over 25 capital murder cases during her distinguished career.

Watson noted that he is grateful he has been able to assemble a capable and experienced staff and that they have had a full year together, developing into a cooperative and cohesive team. “It’s because we all pull together and work well together, that I was able to make our offer of assistance to our friends in Panola County. With such a great team, the prosecutorial efforts in Gregg County will not be affected and it will be business as usual,” said Watson.

A graduate of Baylor University with both a Bachelor of Business Administration and a Law degree, Sikes had served in the Smith County District Attorney’s office for over 15 years before joining Watson’s staff as his first hire.

In addition to her capital murder prosecutions, Sikes has successfully managed thousands of cases, including more than forty-five murder cases, and six death penalty cases in which the death sentence was sought and imposed.

Dr. Andy Baker marked his first full year at KISD this week and shared some thoughts on progress and achievements over the last year.

One year ago, new KISD superintendent Andy Baker introduced himself to Kilgore Middle School teachers and administrators in the campus library. Baker visited each KISD campus Jan. 7, 2019 and attended a special reception at the Old Post Office for a face-to-face with members of the community. This week marks his first full year with the district.

Kilgore ISD superintendent Dr. Andy Baker started the job just over a year ago in January 2019. The start of classes this week on Wednesday marked his one-year anniversary with the district and he reflected on a year of hard work and achievement.

“I believe my first year here in Kilgore has been very positive,” Baker said by email.

“My understanding of Kilgore ISD prior to my arrival was one of tradition and pride and my time here thus far has proven this to be true.”

Baker was the unanimous choice by the KISD board of trustees to take over as superintendent after former superintendent Cara Cooke tendered her resignation last summer. The search for candidates was assisted by a specialist from Region 7 Education Service Center.

Baker was appointed the lone finalist at a special board meeting Nov. 30, 2019 on a unanimous school board vote. Trustees reached their decision after a weeks-long process narrowing an original list of over 70 applicants.

Following the vote, KISD board president Reggie Henson said the board felt Baker was the right choice for the job.

This week, Baker said his first year with KISD left him impressed by the commitment of faculty, staff and students and he is looking forward to building upon achievements met over the past 12 months.

“Over this past year, as the Superintendent of Schools for Kilgore, I’ve visited our schools, I’ve had the opportunity to meet with our faculty and staff, I’ve had the chance to talk to many of our students, and I’ve been able to work in conjunction with our KISD School Board. My observations throughout this first year show that we do many things well, but my interactions thus far with our faculty and staff and our School Board of Trustees also show that there is a deep, foundational commitment in this school system to improve every day and every year. This commitment to cultivating a positive learning environment in KISD was here prior to my arrival, and together we are going to build upon it to ensure a continued culture of high expectations, responsible citizenship, tradition, and pride.”

Over the past year, Baker has worked with board trustees, teachers and faculty members to identify areas within the district which need improvement and focus. Part of this process included careful study of district and campus accountability reports released by Texas Education Agency.

Baker’s tenure with the district has already shown district-wide improvements on these ratings. KISD earned a “B” overall grade from TEA for the 2018-19 school year by earning 80 out of 100 possible points for its rating.

It was a whole letter-grade improvement over their “C” rating for 2017-18. However, Baker has stressed in the past the importance of working on a district’s “climate and culture”, not just on standardized test scores and state ratings.

He said his goal now is to continue identifying areas for improvement and working with staff to implement changes.

“In working with our department and campus leaders this past year we have examined our school system’s organizational structure and culture, the alignment of our curriculum, the application of our classroom instructional strategies, student achievement in Reading/Language Arts and Mathematics, and our District’s relationship with the City of Kilgore and our community. As a District, these conversations have helped us identify areas that we believe we do well in, and areas we now know we must improve in. These have become areas of attention for this school year and we will look to continue them into our second semester. For example, our campuses will look to continue our student targeted intervention strategies in the core subjects areas of Reading/Language Arts and Math and our classroom teachers and campus teaching teams will continue to identify instructional areas of concern and will work together to implement strategies to address these deficiencies.”

The superintendent reports feeling a sense of optimism moving into the new semester.

“Overall, I’m very pleased with our school system’s progress thus far this year and I’m optimistic about what we’ll be able to accomplish by the time May rolls around,” he said.

“I truly believe that every employee of KISD is a teacher...from our bus drivers to our classroom teachers, from our receptionists to our administrators...we all have the responsibility to educate our students through both action and example. My first year here has shown me that we have many, many great teachers in KISD and together with the support of our Kilgore community, our students will continue to make us proud.”

Prior to that, Baker held several positions at Prosper ISD in Prosper, including campus principal, high school and middle school assistant principal, government and economics teacher and boys basketball coach from 2001 to 2009. He also taught history and coached basketball at Valley View ISD, Collinsville ISD and Kemp ISD between 1994 and 2001.

Sabine River Authority of Texas provided the City of Overton with a $20,000 check Tuesday, Jan. 7, as part of a Community Assistance Program Grant. The funds are slated to be used for assisting the city to make repairs and renovations to the North Lake Dam and spillway.

OVERTON — The Sabine River Authority of Texas (SRA) was pleased to award the City of Overton a Community Assistance Program Grant on January 7, as part of SRA’s Fiscal Year 2020 Economic Development Initiative.

Funds provided for the Community Assistance Grant Program must fall within four project categories, which include 1) Water Supply; 2) Wastewater Management; 3) Water Conservation; and 4) Water Quality and most are limited to $10,000 per project. Funds for the grant to the City of Overton were approved by SRA’s Board of Directors in December 2019.

In order to be eligible for the Community Assistance Program, applicants should be a governmental entity, district, or a non-profit, member-owned water supply corporation or sewer service corporation and located within the Sabine River Basin of Texas.

Water resource projects should be consistent with the statutory mission of SRA.

Created as a conservation and reclamation district in 1949, responsibilities of the SRA are to control, store, preserve and distribute the waters of the Sabine River and its tributary system for useful purposes.

The Sabine River Basin covers a large portion of East Texas with a population of over 551,000 in all or part of 21 counties according to U.S. 2010 Census figures. A large portion of that area is rural in nature.

“The greatest glory in living lies not in never falling, but in rising every time we fall.”

School started this week at KISD campuses but the holiday slump will officially end next week, as the city of Kilgore gets back into the swing of things with an assortment of events. Kilgore City Council will hold their first meeting on 2020 on Jan. 14, a public safety open house event will be held at the Ronnie D. Moore Public Safety Center on Jan. 16 and the “20/20 Vision” prayer and Scripture reading event will take place next weekend. It’s a relief to me, faithful readers, to see the City of Stars springing back to life after the winter slumber. The KNH team is anxious to get back out into the community and begin covering the stories you want to see in our pages.

There’s some nasty weather predicted for this weekend, and temperatures are expected fall. This means, among other things, that it’s the perfect time to hunker down around a warm bowl of that favorite Texas dish: chili. If you’ve got a tried-and-true recipe that sticks to your ribs, now is the time to whip out your Dutch oven or cast-iron skillet and get to cooking. If you’d rather leave the cooking up to someone else, feel free to attend the annual Kilgore Lions Club Chili Luncheon on Thursday, Jan. 17. Get the full story (and a handy recipe) from Linda Ballard in this week’s Chit-Chat column in our Lifestyles section.

My, how time flies. It seems like only days ago when the Kilgore ISD board of trustees voted unanimously to select Dr. Andy Baker, formerly of Edgewood, to be the new Superintendent of the district. It’s now been a full year since he has been in the post and all signs indicate the trustees made the right call. Read some of Dr. Baker’s thoughts and reflections on his first year at KISD in this edition on the front page.

Just last month, a Longhorn from Rocksprings appears to have broken the Guinness World Record for largest horn span on a steer, measuring 11 feet, 1.8 inches from tip to tip—6.4 inches longer than the listed record, according to Texas Monthly. I guess everything really is bigger in Texas.

“The way to get started is to quit talking and begin doing.” -Walt Disney 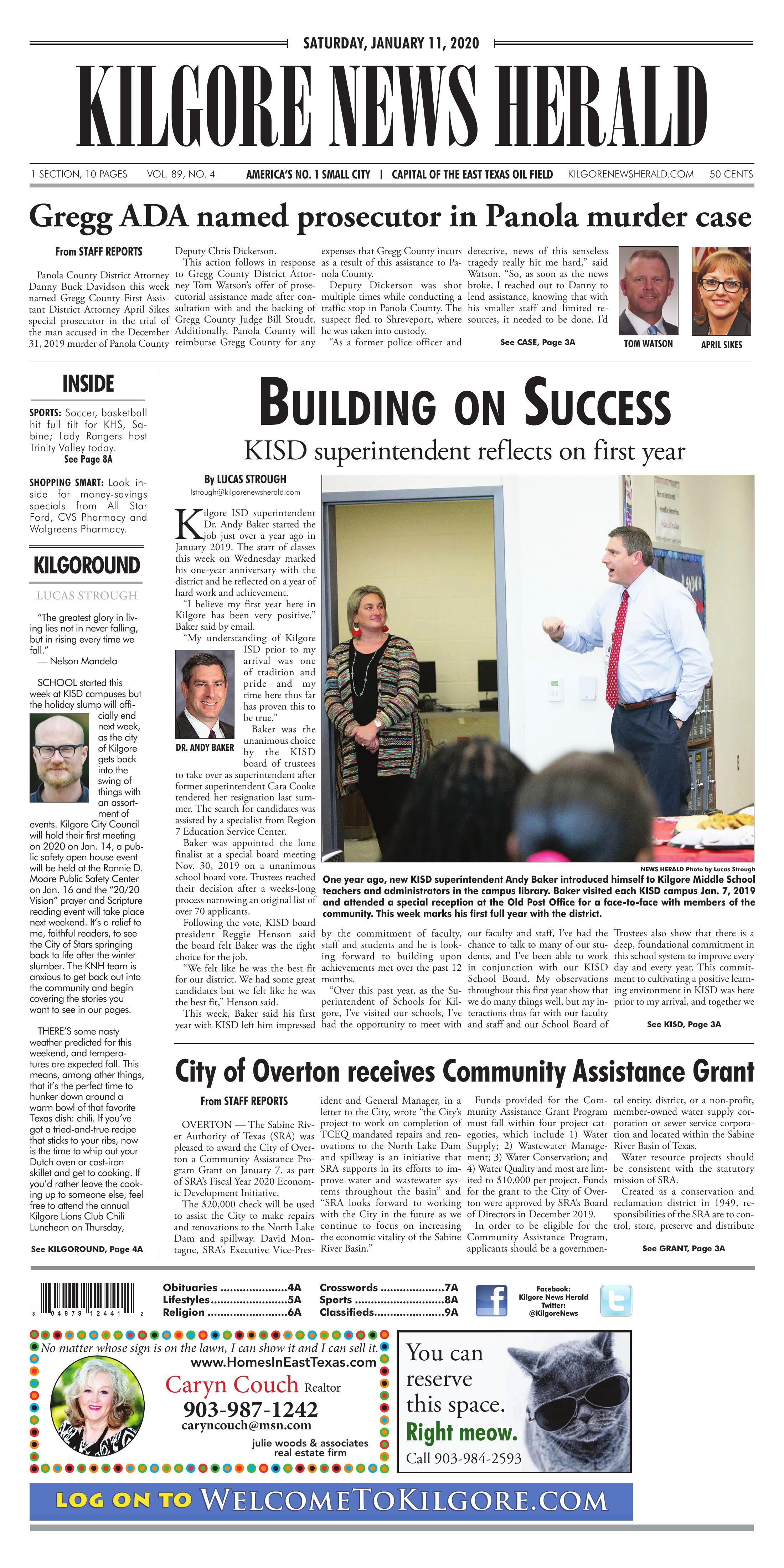